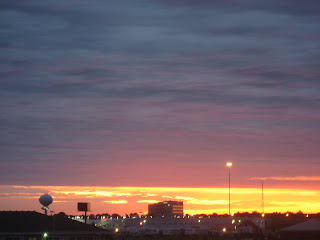 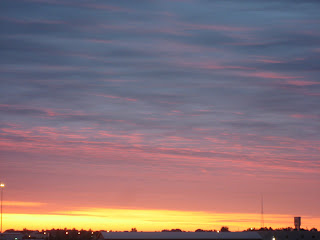 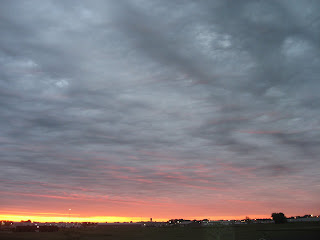 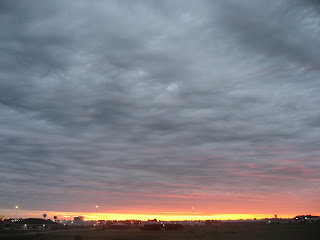 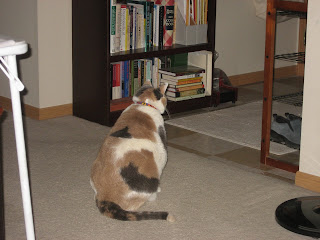 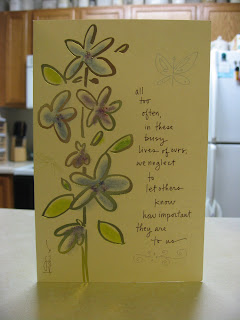 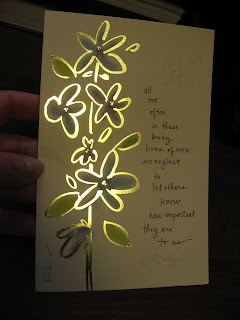 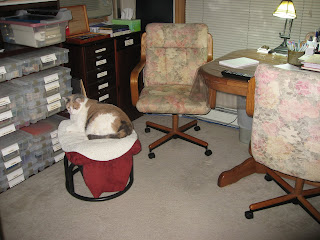 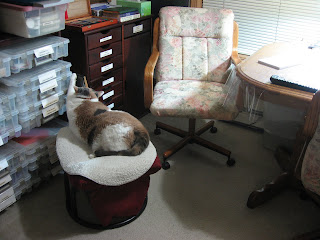 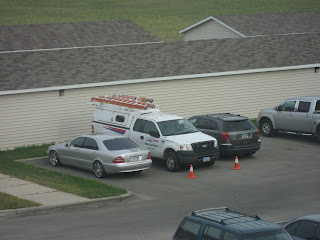 Yes, I too, pray for those affected by Hurricane Irene and relieved it wasn't as bad as first suspected. I have not forgotten the aftermath of Cyclone Yasi in North Queensland back in January. Massive destruction and flooding left in its wake...it was heart-wrenching. In case you don't know, cyclones are the same as hurricanes...just depends on which part of the world you live in as to what they are called.

The card Iggy sent you is lovely! I like the shimmering edge of the flowers too.

I remember all the trouble you had with CableOne disconnecting your line. I wonder how many other people they play havoc with. Too funny about the cones....yep, they must think they're all important. lol

I'm glad the hurricane wasn't as bad as predicted too, and hope everyone is safe and well!

Our old phone and internet company keeps doing that. Guess what though? We're not buying it! Like I'm really going to go back to a company that's twice the cost of the one I'm now with and about as helpful as a bucket with holes in it!

Yes, Karma is a bit like a toddler who wants your attention, but it's so cute we can't help ourselves. Love the card, and I'm also glad for you that you don't need that cable company any more!

Once again, Rita, your posting charms me. Within each of our lives there is a daily-ness, a routine that keeps us centered and close to the heart of the matter. You show that in each posting. Thank you.

And thank you, too, for reminding us that Irene could have been so much worse. Also thank you for helping us remember those people who have lived with her battering presence.

Iggy is such a thoughtful guy. I am so glad I have gotten to know him a bit in the past year.

Karma is a crack up-- reminds me of when my cats would demand my attention! Their favorite? To sit right between me and the keyboard. And I thought cats were supposed to be so independent!!! Not always. I kinda like those that aren't too independent!

Awww... Karma's being bratty huh... Maybe she needs to watch some "good" television? Instead of super-sexy Kiera Knightly, she should be watching Word-Girl, Curious George, Sesame Street, Electric Company, and my new favorite 1-2-3 Penguins!

I'm glad you like the card so much. I felt terribly remiss with my letter writing.

The orange cones have brainwashed the cable guy's union... they thing they somehow make is "safer" out there. The local Verizon guys do this when they park in a supermarket parking lot (sometimes even between the lines) and go in the store.

I shake my head at human mass-insanity.

AWESOME SUNRISE SHOTS! (sorry, i just had to do that..lol) The sky was beautiful.

Karma is quite the little poser. LOL I love seeing pics of her, in any situation. Keep 'em coming. :)

The CableOne people must think they're pretty important. (they must pay those OCHAs big money to guard them so well, too)

I'm thankful the flooding that hit close by didn't get us. With a creek on each side of us, it could have been bad. We've been flooded several times in this town. My heart goes out to everyone who is still dealing with the aftermath of Hurricane Irene. She claimed at least 40 lives, some of whom were children, and that alone is tragic. :(

Serena--Yes, I knew Cyclones and Hurricanes are the same thing and have always wondered why they don't call them by one name. Anyways, I do remember the damage and flooding you guys had down there! Takes a long time to recover. New Orleans has never been the same since Katrina even years later. Japan is still in upheaval from the tsunami. Amazing the damage wind and water can do. We were lucky the force had dropped so much. :)
LOL! And when I'd have internet reception problems they'd always blame it on my modem and tell me to go buy a new one! Luckily Dagan knew better. ;)
Have a super week, lady!

Tori--I have met the best people online!! ;)
Glad you don't have to deal with your old company anymore, either! Feels great! :)

Djan--Yes, Karma is like a demanding toddler sometimes. *she says with the cat sleeping between her legs as she types on her laptop* ;)

Dee--My life has it's own particular routine and daily-ness, as we all have. I have found it to be an unexpected blessing to be housebound. You never know what gifts life will bestow on you. :):)

Nikki--Yes, Iggy has a shiny soul. :)
Sounds like Karma when I try to write at my desk...she tries to lay right across the paper! Yes, they're independent like small children...only until they want some loving and attention or the world looks scary--LOL!

Iggy--1-2-3 Penguins? Never heard of that one. But then, with Dagan being 36, I'm out of touch with the world of the little ones by many, many years--LOL!
You have a note making its way in the mail as we speak. ;)
Aha! The cones have brainwashed the cable guys into thinking they are safer if they mark their vehicles with sturdy plastic cones. Makes perfect sense to me now. The cones do need employment, just like too much of the rest of the country...and the cableguys do appear to be easily fooled--LOL!!! ;)
Thanks for the giggle, my friend!! :):)

Thank you, Rita, for your comment on my Tuesday posting. I consider myself truly technologically challenged, so that I'm now scanning and inserting seems like a small miracle to me!

Dee--The hardest part for me was how the pics post backwards from what you expect--LOL! You are doing really great!
And harder than the technical stuff is opening up your heart and telling your life story! You've been amazing with that, too! :):)

AliceKay--I've been getting a lot of pretty sunrise shots with this time flipping. I hope you don't get sick of them...or of Karma--LOL! ;)
Those sneaky OCHAs!
I just keep thinking of how lucky everyone actually was that Irene didn't stay a four!! :)