Karma's recovering from a week of daily company. She's spent most of her time since yesterday passed out on the warm porch catching up on her lost beauty sleep--LOL! 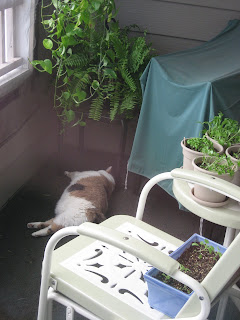 [Karma was friendlier to Ruby, though, than anyone I've seen in the last four years. Maybe because Ruby is an born animal lover...plus moves more slowly like me? LOLOL!]
****
Well, greetings! I feel like I've been gone longer than a week...and yet it feels like my time with Ruby flew by so fast we were shocked when it was over. :( 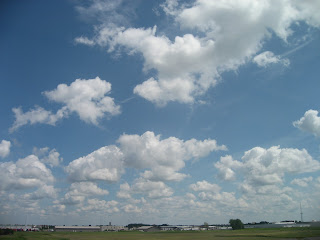 Having my first "company" coming in many years was motivation to at least finish cleaning my desk, right? I found strange antique items like these floppy discs. Shows you how long it's been since I went through everything--ROFL! 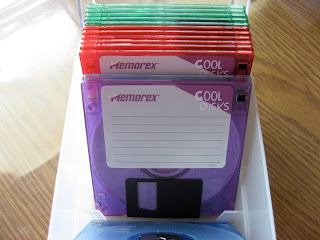 I did get the desk and file cabinet finished, inside and out--tada! 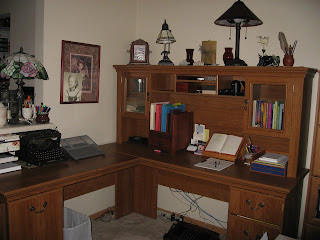 I cleared off the art table (and the craft table-forgot picture) because Ruby was bringing along a Chinese brush painting kit she'd bought a while back. Cool! 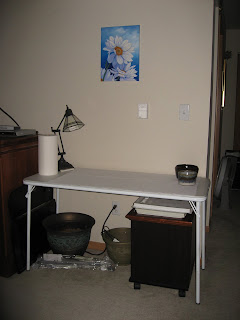 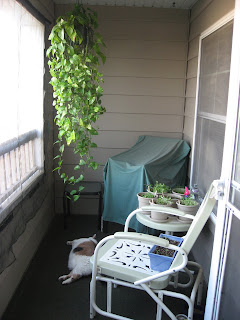 ...and even quick made little popsicle stick markers for the herb pots. 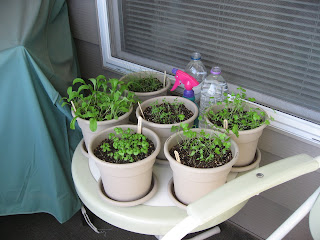 I had my Mother's Day roses hanging to dry in the hall closet for so long I'd almost forgotten they were there. 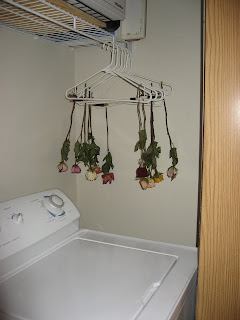 When cleaning the top of the hutch...well, here's the old bouquet from a couple years ago. 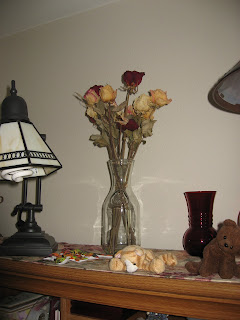 These seven roses were still good. The red ones get very dusty looking after a while and you just can't blow the dust off them for some reason. These still looked gorgeous! 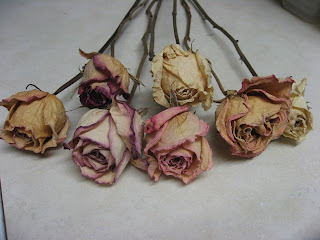 A couple of the new ones fell apart, but here is the new dried bouquet... 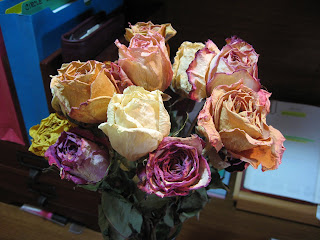 ...with some new and some older roses. 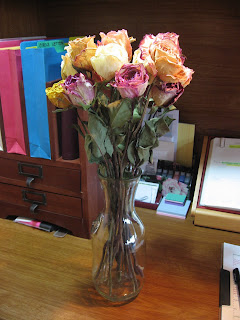 Now they are up on the desk hutch looking pretty. 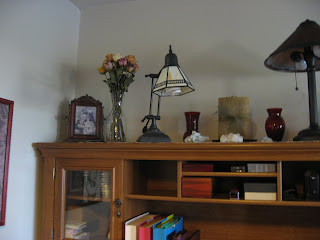 I was so excited to see Ruby that I could hardly sleep the night before she arrived! Here she is sitting in my chair checking out her new phone. I believe this was on Wednesday. She sure doesn't look 70, does she!! 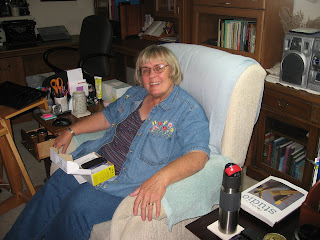 Dagan and Leah had put Ruby on their Sprint family plan, too, a couple years ago so that she and I can gab all we want--hehe! Ruby also qualified recently for the free smart phone. I was the guinea pig (just love mine), so we ordered another free phone for Ruby same as mine so that it was here when she came up. Since they are identical phones, if Ruby has any questions, Leah said we could make a video for Ruby and email it to her--using my phone as the example. Clever! ;)
****
Leah spent all Tuesday evening switching phones for Ruby and teaching her how to use her phone, just like she did with me. Patient woman, that Leah! :):)
****
The splendid days just flew by!! Ruby arrived late Monday afternoon (big hugs!!) and we just hung out and caught up. [She stayed at a motel up the road from me. Sadly, not much room in my little place.] It seemed hard to believe she was actually right here and we could look into each other's eyes! Being in someone's presence is soooo different than emails, letters, and talking on the phone. Ruby is like family to me and always has been. The best loved family folk--if you know what I mean. ;) The whole week was marvelous!!
****
Tuesday Dagan & Leah came over after work and that was "geek night" as Leah put it--LOL! (Phone stuff.) Wednesday Ruby and I just talked and drank coffee and managed to fit in a couple of movies. Thursday we spent the day watching Chinese Brush Painting DVDs...and gabbing, of course. All week we'd be just shocked at what time it was whenever we noticed the clock--LOL! Ruby got practice with her phone, too. She called me every night when she got to her room and I called her every morning. :):)
****
On Friday I had us all set up on the craft table to practice CBP and show Ruby all my goodies! 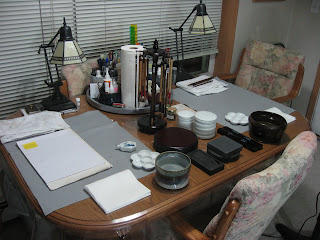 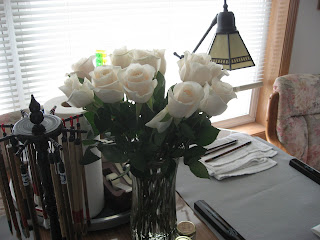 I have to move flowers out of Karma's reach anyways, so I put them up by the TV. Karma's too fat to jump that high--LOL! 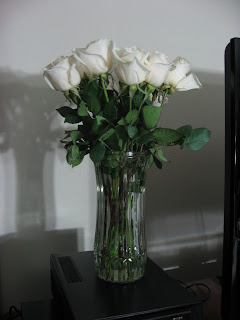 They may look white at first glance... 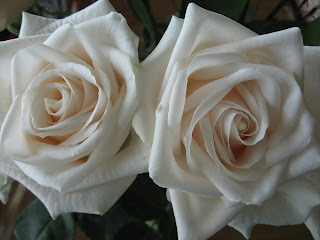 ...but they have a baby's cheek blush to them. (I just took these last two close-ups this morning--just gorgeous, aren't they?) 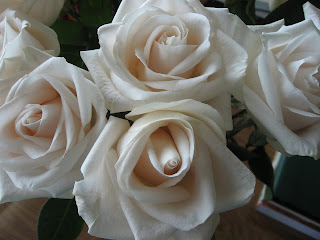 Ruby and I watched the instruction video...painted...went back to watch the DVD...then back to painting...etc...etc...on Friday. Basically were practicing the different strokes for bamboo leaves, orchid grass, and chrysanthemum petals. At least Ruby got some of the basics, not that I know that much. I haven't had mine out for probably 3-4 years!! We had fun playing about! :) 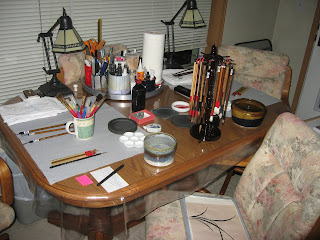 Suddenly it was Saturday!!
****
We painted a little during the day and then went over to Dagan and Leah's for dinner. Ruby got to see where they live and meet Sammy and Annie. 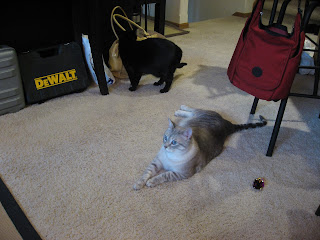 Dagan and Leah made cheeseburgers on the grill, corn on the cob, and homemade blueberry ice cream for dessert!! The corn and the blueberries were from a local farmers market. Everything was absolutely delicious!
****
This was after dinner. I thought it was funny that we were all four messing with our phones at the same time so I took a picture of Dagan and Leah. I didn't realize (duh!) that my phone can take videos and I took a short video of us...but haven't figured out how to get it onto my computer yet--ROFL! 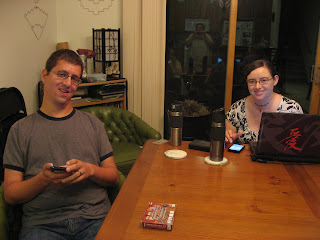 Leah took a picture of Ruby and I. The cards on the table were for this bar fight card game that a couple friends of theirs invented and published. (Do you say published for a card game?) I don't think us two old ladies look like we're ready for a bar fight...but I won--ROFL! 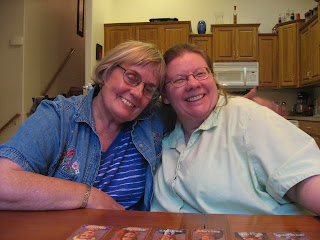 Leah put some games on Ruby's phone for her. Here I am showing her how to play...well, either YahtzMe (like Yhatzee) or Jewels (like Bejeweled). We even played a couple 2-player YahtzMe games together on Dagan's new tablet. 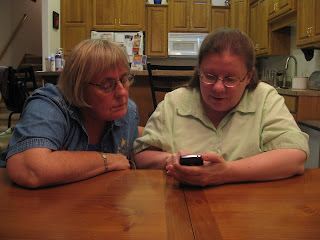 Here she's learning how to play Jewels on her phone. Addictive, these games! ;) 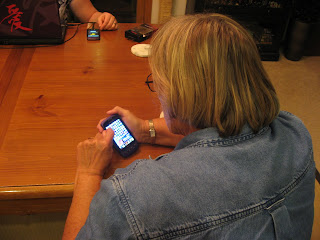 Saturday night we left Dagan and Leah's, Ruby dropped me off at my place, we said our goodbyes, and the week was gone! Just like that! Poof!! It was glorious, though!
****
Actually the timing couldn't have been more perfect. We didn't do the painting and visiting until the end of the week, so by the time I was getting in worse shape it was time for Ruby to leave. Not that she would have cared if I was hobbling about. But, poor Ruby! She's used to being out and about and more active--so she was getting creaky from sitting around here for days with shut-in me. And I am the opposite with the fibro--the more I move around the more pain I'm in. So we were both pretty creaky by Saturday--LOL! ;)
****
It was a superb week with an totally awesome woman! I'd do the happy dance but I am taking it easy because I have to be out and about tomorrow--to the dentist's for a teeth cleaning--LOL! Caroline is coming Wednesday instead of Tuesday this time. Feeling a touch bereft.
****
I am soooo far behind on the blogs I follow that I plan to do catch-up reading as I am able and just start now from today with comments. I know. I know. I probably follow too many blogs--but I do like them all. Even if I don't always comment, I do usually read each and every one of them. I hope no one takes offense if I don't comment on the last week's posts. Doesn't mean I won't read them eventually. Sorry.
****
It is good to be back, but I do miss my Ruby. :):)
Hope there is a really good week ahead for us all!!
****
"How lucky I am to have something that makes saying goodbye so hard."
Winnie the Pooh
Posted by Rita at 11:56 AM