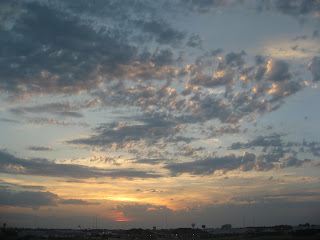 Up early enough for the sunrise. 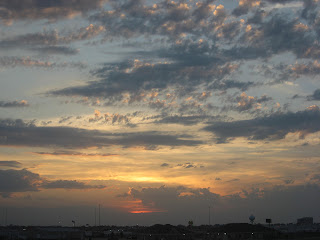 In fact, I was awake before this sunrise. 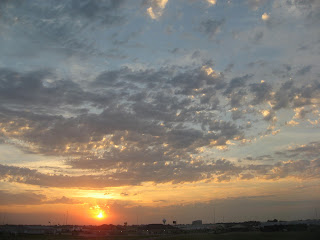 I woke up at 5:30 to make a bathroom run and was so dizzy it startled me.  I almost thought I would fall over just standing up.  I made a trip to the bathroom and tried to lay back down and go to sleep, but finally gave up by 6am because I was still dizzy and nauseous laying down.
****
So much for me and these meds.
****
I was a little off yesterday--stomach and head--but not bad.  I did think they were taking a little bit of the edge off the pain, but now I'm getting definite reactions.  This feels similar to what morphine does to me.  Makes you feel like you're on a bad drunk--spinning, head feels funny, and about to throw up.  But my hands and feet slightly tingle, too--or like the pins and needles you get when your leg falls asleep kind of...lightly.  I still feel all of that right now.  No more of this medication for me.  Done.
****
Funny how I am so sensitive to certain meds and other ones don't phase me and don't seem to do a thing--like sleeping pills.  (Which is why I am shocked the melatonin works, even if it is a kind of subdued, delayed reaction).  Anyways, this pain relief route is also blocked--and I hope this feeling goes away soon--today!
****
I tucked the cover up on the metal gliding rocker on the porch so Karma could get to her water easier.  She doesn't seem to like to have to crawl under that new cover and over that metal arm piece to get to her food and water.  When I made the way easier, she scooted right under...as if to a long lost friend.
****
A little while later I found her snoozing--using that arm piece as a metal pillow.  Karma does love her hard pillows.  (When she deigns to tolerate sleeping with me in my little bed, she uses the bookcase headboard as her pillow.) 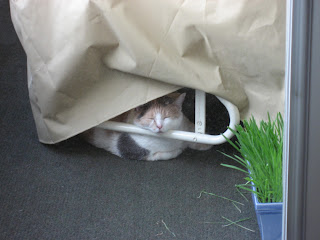 Of course, her sprawling tendencies trumped having to sit up to use a hard pillow. 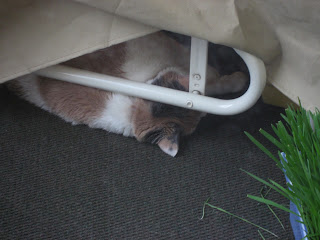 I guess I'll have to go get my secret code and check into the clinic's website so I can email Dr. Sleckman and let him know.  Later.  When I feel better.  I am done with the computer for a while, she says woozily.  Later....
Posted by Rita at 7:27 AM

Those are some incredibly uncomfortable side effects, Rita. You are right to stop taking it, right now! I am so glad the melatonin works so well for you. I take it almost every night myself.

Sorry that the med caused those side effects, Rita. Hoping the feelings go away sooner than later as the medicine gets out of your system. Pretty sky though this morning!

Beautiful sky. You take darned good pictures for a woozy person. Hope the drug side effects wear off soon.

sorry to hear about how the new med's make you feel....hopefully by now you've been able to reach your Dr and maybe he has something else you can try. it really sucks how so many med's have such bad side effects...but when you NEED to take something...you don't have much choice. i hope your Dr can find something else for you to try!

LOVE the sunrise shots rita!! just sorry you were feeling so terrible...at least karma is such a character...she can always make you smile!! :)

sorry about the meds! dang it!

I'm so sorry that the meds didn't work. I hope your doctor can come up with something else that will work for you.
Mail him and see if he will suggest something else. I hate to hear of you being ill this way.

Eat and get some rest! It may help you feel better.
Take things easy, but above all, take your doctors advice!

Hugs to you and Karma.

I have reactions to so many meds. Do stop taking them asap.

That is the nastiest feeling in the world! I hope you feel better soon!

I got an uspet tummy just reading your symptoms.

:( I hope you feel MUCH better by the time you get back on the computer.

Karma is happy to be able scoot under the chair cover! She's so silly!

Dear Rita, I hadn't read your Saturday posting and so when I first started to read today's my heart fell because what you were experiencing sounded so much like Meniere's. Then I read on and learned that you were on that new medication.So I went and read Saturday's posting.

I surely understand having to recuperate after being out and about. I don't need two days, but I usually need at least one. Mine is just from age. Yours, however, is from all the pain you experience and from the fibromyalgia. It's a relief to know that you take care of yourself and don't demand from your body what it can no longer give you.

Please give Karma a big "Meow" from the three Independence cats!

I was on morphine for a little less than 24 hours when I broke my back. I could understand getting addicted to it. Kisses to you and Karma, and I hope you feel better.

Sorry to hear about the dizzy spells Rita - fingers crossed you find a better solution soon.

A Cat could sleep on a bed of nails if it took their fancy...

I hope the effects go away quickly. It really is amazing how different everyone is regarding reactions to medicines.

I've seen cats laying on hard surfaces like what Karma does under the chair, and I wonder how they don't choke themselves. Maybe you could ask her for me? LOL

It sounds like this drug is causing you to experience a form of vertigo...dizziness and nausea. I had a severe vertigo attack once and thought I was having a stroke...it was horrible so you have my full sympathy. As you know, Brad is very sensitive to drugs used for epilepsy. The side effects can be very severe so best you stop taking it for sure.

LOL at Karma and her love for hard pillows. Cody prefers soft pillows.

You take it easy now and get some rest until the side effects clear. Thinking of you. xo

Btw, I popped a letter in the mail to you this morning...SHOCK!! LOL

I'm sorry about your awful reaction - drink lots of fluids to flush that stuff out of your system!

Your sky pictures are gorgeous!

Oh Rita, please be careful, that medication sounds positively dangerous.
I am so glad Melatonin works for you. I have no such luck and have many sleepless nights which makes me bad-tempered and feeling sickly.

The sunrises are amazing where you are you have a really good, full horizon.
Lucky you!
xx

Sorry you're feeling so awful and the new meds didn't work out! :( *Hugs*

Rita, I hope you are better soon! And feeling chipper. Terah

Dizzy is not a good place to be. I hope you get back to normal really quickly.

I hope you're feeling better. I'll be praying for you.

I'm sensitive to meds too--that can be such a yucky feeling waiting for them to get out of your system.

Rats- I had my fingers crossed that this new med would work. At least Karma can relax- hard pillow or not.

Loved the sunrise shots. Sorry to hear that medication is giving you such nasty side effects. :(

Bloody awful drugs... Phantom is not taking any more epilepsy meds either... she had a terrible time with them, and the rheumatologist said he was giving up on them as he was just sick of his patients all getting side effects... just the other day Phoebe was saying that it is nice not to be dizzy all the time... so it is finally all out of her system... lucky you had a bad reaction so quickly so they will be out of your system really quickly as well... hate hearing that another drug is off the list though... sending you get better thoughts...xx

I hope you are feeling better, Rita. It sounds like the medicine did quite a number on you.