You may remember the sketch of Dagan and Leah's house that I showed you.  Theirs is flipped from this one--with the front door on the opposite side, etc--and they will have a triple garage, but this gives you an idea. 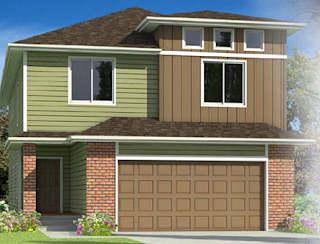 They've been waiting for it to be dry enough for them to start digging the basement (technically kind of half basement).  First they push away all the black dirt, which they save for later for the yard.  They did this a while ago. 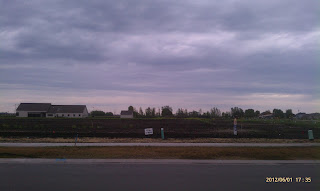 But they have finally begun on the basement! 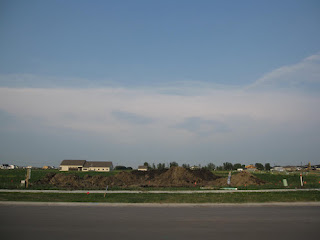 Pictures of the dirt hole from the street. 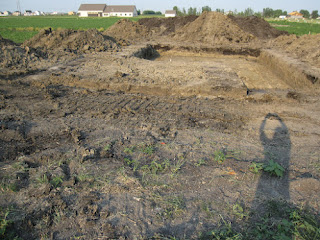 I love Dagan and Leah in long shadows. 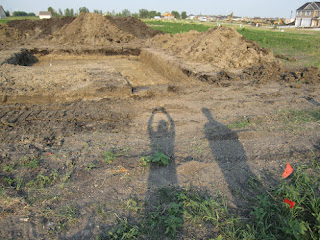 They got up closer. 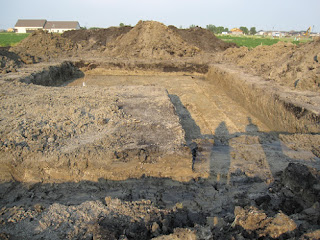 It's all clay beneath the black dirt. 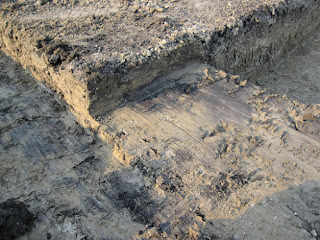 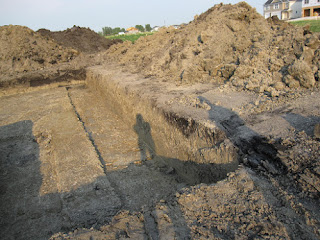 Dagan playing with some of it. 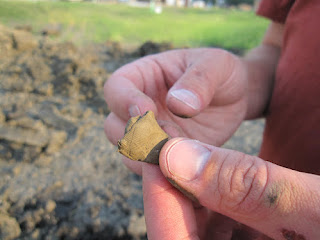 Still damp enough that it curled as it was dug away... 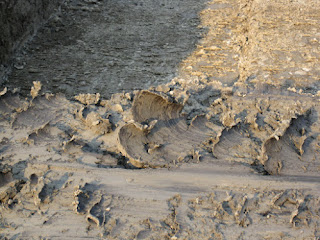 ...and left some standing water even though it hadn't rained since they dug. 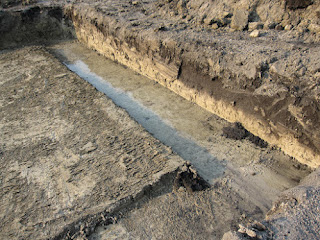 They have finally begun building the house--tada!  Once they get the foundation done the houses go up quickly.  I'll have pictures for you as I get them from Leah.  :)
****
Yesterday I washed clothes, bedding, and towels.  One of my fans died last week.  Leah took it apart and the motor was shot.  So, it's been warmer in the bedroom than usual.  Quite warm when you're handling hot clothes--LOL!
****
The air from my air conditioner blows straight across the far end of the living room--aimed at the porch door.  So I need a fan on that end to push the cooler air into the rest of the bigger room, another one at the far end of the living room to blow the air into the hallway toward the bedroom and bathroom, and another one in the bedroom door to catch the cooler air so I can get some in the bedroom.  Takes three fans in here to make the complete U-turn to get the cooler air into the bedroom.  Without the magical three it's probably a good ten degrees warmer in the bedroom.
****
Dagan and Leah were over at Target last night and called me.  They didn't have any really cheap fans left--or very many fans left at all for that matter with the heatwave up here.  I can't pay them back until August (because of my big plans for July here), but they said they'd buy me one anyways right now and I can pay them back in August!  Whoohoo!!  Leah said she'd drop it off after work one night this week.  :)
****
I have groceries coming between noon and 2pm, so I have to get going here.  After groceries are delivered I will know for sure what I can get in my Amazon order.  I mark "no substitutions" so I never know exactly what my grocery bill will be--often a little less than expected.  If I am not missing anything absolutely essential--then I'll know what else I can get along with my special item for July.  I promise I'll show you after I order it and not leave you in suspense.  Honestly, this is probably only thrilling for me, anyways--LOL!  ;)
****
The hot, sticky weather continues here.  It's even too much for Karma already in the mornings these days.  She didn't last five minutes out there this morning and is tucked in her bed giving herself a little bath right now as I speak.  Got to get moving.  Have an exciting day!!  :):)
****
"Those who dream by day are cognizant of many things which escape those who dream only by night."
Edgar Allan Poe
Posted by Rita at 11:47 AM

Tell Karma that the heat is getting to be too much for me too. I am ready for fall.

The house for Dagan and Leah looks very nice!

I can't wait to hear what the big surprise is!

Fans are essential! I've got one blowing on me as I speak--I think I run a little warmer than I used to (part of being 48?)

LOL, over here, we usually make do with one fan, other than that the windows are always open...one of the good things about living so remotely.

I was really interested in your "Sacred Circle", I too, dabble a bit with crystals and semi-precious stones, runes and Tarot and Angel cards.
No photos of Miss Karma today? My cats are busy catching moths at the moment...{sigh}, I hope they don't bring them into the house!

I hope the construction of Dagan and Leah's house goes well. Sitting on clay is a challenge, isn't it?

I'm glad Leah was able to get you a new fan. According to our news last night, some stores in the area are running low on fans and air conditioners due to the extreme heat.

I use a series of fans directing air throughout our trailer, but by late afternoon/early evening, this bedroom, and the one behind me, gets very warm. The sun hits the whole side of the trailer by mid afternoon.

I hope you receive everything on your grocery list this month. It must be rather difficult not knowing exactly what items you'll be getting in your grocery delivery until it actually gets there.

i so miss living in an area that can have basements! texas' soil conditions are not stable enough to support them. sure could use the storage space and storm shelter! :)

I love the photo with Dagan and Leah's shadows. Building a house can be rather trying, but it's such fun to get exactly what you want.

I thought our soil was clay, until I saw these pictures. Now that's really clay! How exciting to have the place under construction. And so cool to have them front you the new fan, now when you really need it. :-)

They usually have decent fans at Walmart and Walgreens too.
We are in serious need of rain.
I hope you are comfortable and cool enough.
Enjoy your holiday!

How fun to be there when someone's dreams are coming true .... their house is sweet - and I love all the open space there .... it will be a lovely place!

That is great that Dagan & Leah got you the extra fan and are fine with you paying them back in August. Wow the house looks like it will be nice once it is done.

How exciting with Dagan's and Leah's house starting construction!! I know they'll be excited to move into it when it is completed! Its kind of funny here with fans, you would think it would be an item they would carry year round, but they are definitely seasonal, but when the first heat wave of the year starts, the shelves get pretty wiped out quickly. Glad you'll be able to have a new fan soon!

hope it cools off a bit too!

It's really hot and humid here too! We got a slight reprieve Monday night and that was it. I'm so beyond exhausted....

That's very cool about their house! I hope everything goes smoothly!

Looking forward to hearing about your July Surprise!!!!

Hugs! And please send prayers and positive thoughts our way!

beautiful pictures! i enjoyed seeing it ♥


If you have a minute, please check out my blog and follow me if you liked it. I'll appreciate it so much! Thanks!

That's great about construction finally being under way with Dagan and Leah's house!

I'm very greatful for the sea breeze, since I'm sure that's what's keeping the temperature down her. According to Kelly (who I just asked) our temperatures have been in the mid to high 20s as a rule (80s to 90s F) and that sea breeze has meant I haven't noticed much. YAY for living near the ocean! ;)

I'm so excited about Dagan and Leah's house. Yep, they sure go up fast once the foundation is done. You have to watch with certain types of clay especially if it is really soft. A house we had built once needed, by regulations, to have a special deep pit dug under the foundation because the type of clay was way too soft. The pit was then filled with a special gravel type of rock and then, the regular concrete foundation was built on top of that. This was to stop movement that can cause structural damage over time. Don't panic about Dagan and Leah's place though...clay is okay but our clay was the worst type that needed a special foundation.

I hear ya on a dead fan in summer. It makes a huge difference. Mind you, we suffer without air-con and rely on ceiling fans. Sometimes, they just circulate the hot air.:(

Sorry, I'm late with catching up....I've had a rough trot with flu and I shouldn't even be at the computer now. The flu medication makes me feel like a zombie.

What a thrill it must have been to actually break ground for that new house.

We are having a very mild, some say too mild, summer here in No. CA. Wish I could send some of the morning marine layer of overcast your way.

finally catching up and how exciting to see the foundations dug.... no fun in all that heat, but I can't wait to see photos of the house as it emerges...xx

Yay! They broke ground on the house. (I'm so far behind, the house might even be done already.....) I hope it goes smoothly!

How exciting! It will be fun to watch the progress on the house! :)

no basements here in florida...but raiswed in NY...ours was a 'play room/work room/dad's toolbench/laundry room/furnace' combo! glad to hear they're getting a start on their house! yay! nowadays it doesn't take too long to build them!!

don't ya feel sorry for the 'little ones' in this HEAT...that have no choice but to keep their FUR coats on...no matter what the temp is!! milo doesn't even like to go out right now...between the HEAT and the starving mosquitoes!

How exciting to be building a new home! They must be thrilled. The long shadows look cool against the clay.

The excavation in the clay reminded me of when my parents built their home. To save money, they acted as their own contractors, cleaning crew, etc. So, every day after the builders left, my dad, mom, sister, brother, and I went to the home and cleaned up.

In order to get to the house, we had to walk from the street through clay. My mom gave us each bread bags to put over our shoes so we wouldn't get our shoes dirty. More than once that clay sucked away a bag right from foot. It was one of those odd memories from childhood.