We had a little snowstorm... 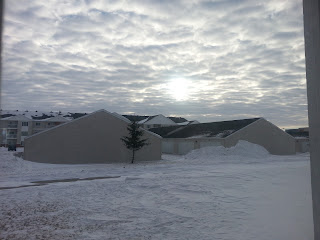 ...well, several inches of fresh snow actually.  Was so cold and windy that there weren't even footprints the next morning. 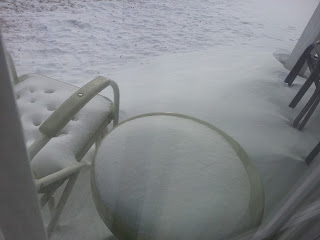 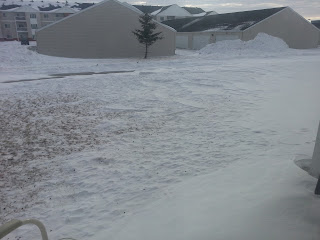 They were probably hunkered down for the night and so were the grouse...somewhere. 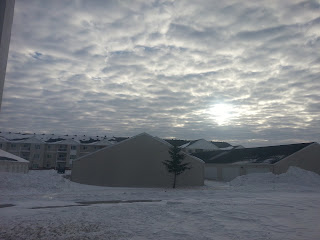 The wind did its thing, though, and blew down to the precious grass for our critter friends. 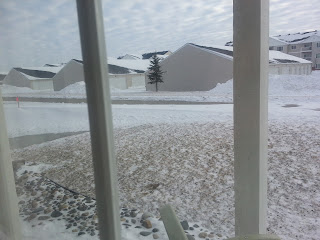 My screen door is frozen shut but there was enough snow in-between... 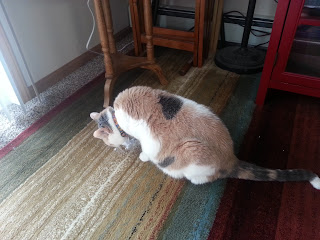 ...to get Karma a little frozen treat to eat. 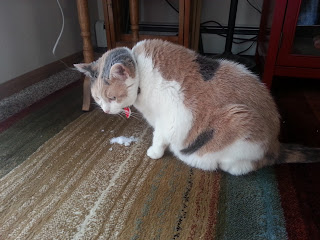 And it didn't take long for our fluffy little friends... 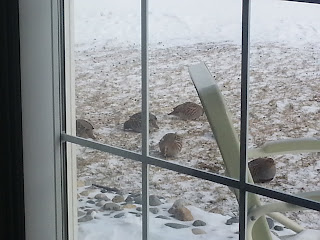 ...to return to foraging in the brown grass. 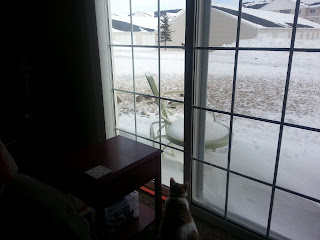 Karma was there to watch them that time... 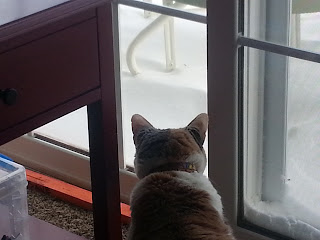 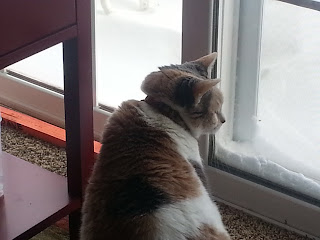 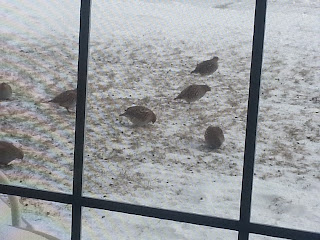 Small pleasures.  My new home is filled with small pleasures.
****
Well, don't fall over...I actually did a tiny something artsy this week one day when I felt pretty decent.  Lindsey over at The Postman's Knock has a 4-step challenge going on for January (so you know the odds of me finishing this--LOL!).  But it's been so long since I have gotten out my calligraphy supplies, I thought I'd at least play a little.  You could print off her pretty goal list frame if you didn't want to make your own.  Got out my big watercolor palette... 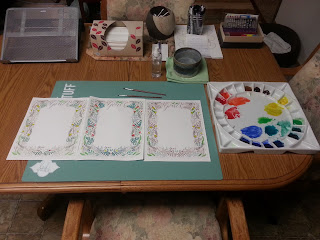 ...and did some coloring.  (Yes, I figured I probably needed three shots at this--LOL!) 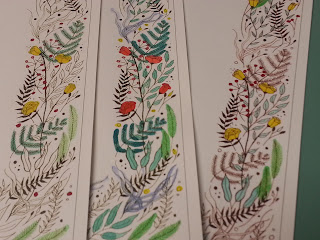 Next you are to write your goals inside the frame. 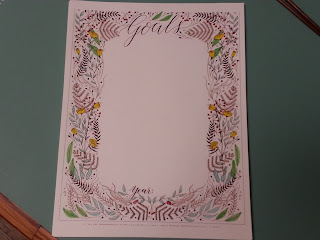 Of course, I haven't gotten that far.
****
I don't know how to do the type of calligraphy she does.  I only learned how to do plain italic from a professional calligrapher back in the 80s.  (With the internet, I bet there are very few professional calligraphers left in the world.)  Even if I just did my goal list using the italic, that would be good practice for me...and more than I have done for years.
****
I decided to take a stab at this because now Leah was sick this Sunday for our Craft Night and they are going to be out of town this coming weekend so we won't have a Craft Night till February.  That made me wonder about trying some of the online challenges...since I was only planning on working on birthday cards for future years...which I could start at any time.  True, challenges and I don't usually fare well at all.  Anything with a deadline when I'm still dealing with this bad fibro flare (that doesn't seem to want to let up) is doubtful.  But then my entire life--even laundry--is tentative, regardless--ROFL!  So what the heck, right?
****
Meanwhile...back at the ranch...
I wonder if younger people have even heard that saying..."meanwhile, back at the ranch"...from the old westerns.  Or is it a Midwestern saying...an old Midwestern saying?  I doubt Dagan and Leah have probably even heard it--LOL!
****
Anyways, I got a RAK package from Donn in Florida!  He doesn't blog but he has a Flickr account.   Met him through a Chinese Brush Painting group many years ago.  (Another fun thing to play with I haven't had out for a long, long time.) 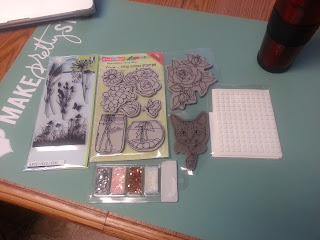 You can see my trusty red coffee mug up in the corner there for the T-Stands For Tuesday group. 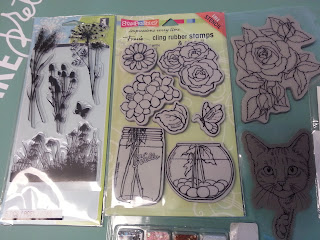 Anyways, Donn has gotten into card making and sent me some stamps and things he said he wouldn't use.  (LOVE that stamp set on the left!) 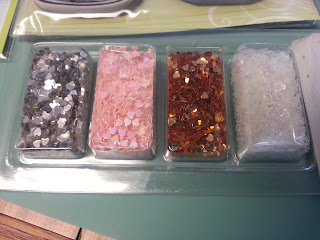 Above--those are teeny, tiny hearts.
****
So Leah and I are going to go through our dies (he has a new Cuttlebug) and other stuff to send him something back.  Sweet!  Thanks, Donn! 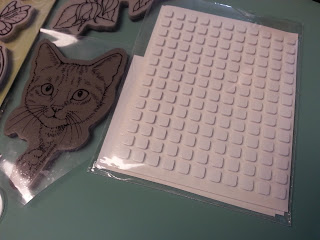 Leah sent me this video of Ian--who has never done the highchair nodding off before.  So cute!
And, lastly, this morning I caught some of the grouse kind of tucked up together trying to stay warm and catch a couple winks.  I wondered how they stay warm--was 3 degrees F (-16C).  The one behind the pole was eating, but the rest of them were resting and snuggled up together and not moving at all.  Didn't even notice me opening the blinds or standing by the window.  Their little eyes were shut, I think, and the nibbler had its back to me most of the time. 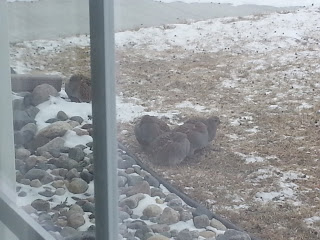 Stay warm, looks like cold days are ahead there. We don't have snow yet, but its freezing outside.

Sounds like a busy week. Love the presents you got in the mail. Karma seems to be enjoying the snow, good for her. Love the photo of Ian, what a cutie. Nice art work, too, have fun finishing it. Happy T Day, hugs, Valerie

Ian, so cute! Mama wore that boy out - LOL! Looks like you got some new pets :) I love when wildlife makes my yard their home if only for a few days or weeks. Take care!

Oh, that cute video of Ian! He's such a little dear. I am glad you felt well enough to do some art work. And looks like Karma is up to scratch again, glad she has something interesting to watch !

Oh Rita. I have enjoyed your post so much today. firstly for the picture of the snow and Karma. Glad you have that snow and not me!! And then the little grouse. I am amazed that they intergrate with humans as here in UK they are so hard to find as they don't go anywhere near people.
And then to finish off your video of Ian. My Hubby does that all the time and says it is shiftwork that is to blame. What is Ian's excuse?
Lovely border frames. I would enjoy colouring those in. I have been colouring in stampings with my watercolour pencils these last few days and enjoying it so much.
Hugs
xxx

I laughed out loud at poor tired Ian. And those grouse, you do wonder how they stay warm in such cold temperatures. I have often wondered how little birds manage to stay alive in such conditions, too. :-)

Little Ian had a very busy day didn't he!
SO cute.
Your snow pix really capture the COLD and are getting me excited for what might be our first snow of the season here in Virginia...time will tell if it materializes.
Your frames are really beautiful even without words.
You got some fun mail too.
Thanks for popping by my Magpie's Nest
Happy T Day oxo

Hi Rita! I did so enjoy your blog today.What a lot of snow! I enjoyed seeing the grouse and had to play the video again to show my husband.
You have lots going on. I love your coloring. It's all the rage apparently. There are coloring books for adults now. (haha, I have one)
That is so kind of Don to send you a gift of stamps.
Meanwhile back at the ranch.... yes, we say this as well. My husband is British and in the UK
it is a saying, although nobody knows where it comes from.
Little Ian falling asleep in his chair. Bless him!
Thank you for visiting earlier.
Sorry for the late comment, I've been out all day.
Happy T-day,
Lisca

Well, the weathermen here are predicting a storm starting Friday night so I'm glad we did our food shopping today. People get so crazy right before a storm is forecast.

I really like your water colors--gosh I haven't done calligraphy in years either. Glad you had some time and energy to play with your art things.

Ian is such a cutie--poor guy falling asleep in his chair!

Meanwhile back at the ranch....when you think about it, isn't everybody's life tentative? Ian's my kind of baby--even though he's sound asleep, he never let go of the food in his hand!!

Awe Ian is so sweet...
Your frames look super already!
Love seeing Karma and the grouses of course:)
What a lovely gift of stamps-i have eyed that set on the left at least several times.
We may or may not get significant snow Friday into Saturday:(
Thanks for popping in earlier and happy T day!

What a fun uplifting post today. Gotta love the grouse, and of course, I tried calligraphy one time. Once was enough, although I learned how to hold the pen and when to make wide and thin strokes. Bet this is really remedial to you.

What a generous person Donn is. Lovely stamps and a great kitty, too.

Ian was a hoot today. What a fun video. Hope Leah is feeling better soon.

Thanks for sharing your week with us, as well as your red mug for T this Tuesday.

your coloring is pretty. :)

Ian looks as if Ian had a three martini lunch and can't go back to work. It's only 38 degrees here. No doubt we'll freeze to death. I imagine we have a lot of sayings that kids wouldn't get. God willin' and the crick don't rise. How's tricks? I remember singing, You git a line, and I'll git a pole, honey, and my son asked me what a po was. Now kids say, Awesome, dude!

haha, you got me with "too tired to finish lunch"...
chilly cold here, too meanwhile.
happy belated t-day and rest of the week!

Wow- you did get some snow. We have just a little and I will keep it that way-if I really had any choice about it! Love your flower piece- it is beautifully done. You really have an eye for clean neat details! Hugs!

I loved seeing the pictures of the grouse. They're such cute little critters!

Hi Rita, thanks for the visit this week and the comment. I missed ONE week and I feel like I missed an eternity.
LOVE your art work, the frame is gorgeous. I have played around with calligraphy, but never took any classes....thus I'm not good at it at all......LOL
Wonderful gift from your friend. I have the set of stamps on the left......love them.
We are getting the predicted rain now (yeah.....except it keeps DH home way more than usual) This morning we have some fog, something we haven't had with all the dry years.
I have a photo of our youngest son asleep at the table, but he managed to put his head IN his plate. Ian reminded me of that photo.....poor baby.
Happy belated T-day

Your IMAX Cat TV is really working well! It even has "sense-surround" at in that it includes "cold snow samples" too!

:) Hope you feel better soon - your art is a masterpiece!

You take some of the best photos, just saying, and oh how cute it is when a little one is too tired to finish eating

Great collection of fun stuff you've received :) Gifts in the mail are always so fun ♥It's been cold here too and we got more snow but at least the other snow had melted in out 1 day warm up we had before it turned brutal out there. I feel like Ian at most meals these days. I could just fall asleep in my food but then when bedtime comes I lay there awake . :(

Oh dear! I am so late visiting, but I am so glad I didn't miss this fabulous post! The video of Ian made me smile - and yes -even in the UK this expression was one of my favourites at one time! I love the borders you have prepared! Great grouse and Karma shots too! Hugs, Chris

Poor Ian, he made me sleepy..sometimes I swear I do the same thing! :)

It amazes me how long little kids can fight sleep. lol I loved the video of Ian. :)