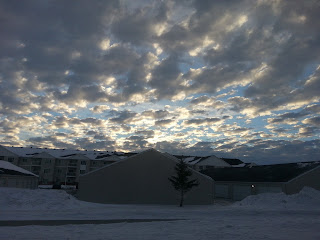 Love the contrast between the blue sky & pick clouds and the almost black clouds that were racing across the sky.  I wondered if there had been a fire somewhere--those black clouds were so low and moving so quickly across the horizon.  But they didn't quite look like smoke clouds. 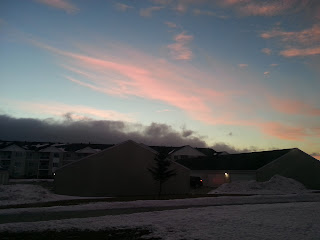 Karma doesn't have to wait for me to open the blinds. 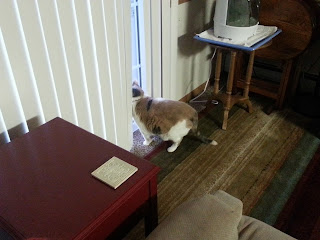 She just pokes her head right through. 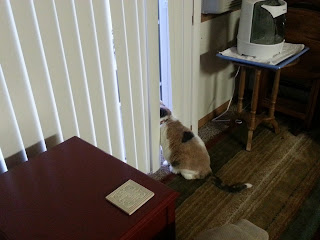 It made it up to 40 one day!  Lots of melting going on that day.  Pattering down from balconies and air conditioners and the roof--was new to me from all those years living on the top floor--LOL!  Kind of relaxing.  Sounded like spring.  For a day. 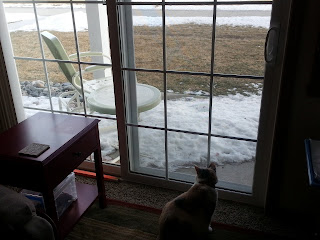 Of course, it all froze--making walking outside rather treacherous.
****
Well, honey definitely won over vinegar this time!!  CableOne never contacted me and I woke up Wednesday with no internet...but a very nice young man from CableOne came and knocked on my door about 12:30pm to pick up my modem.  (I felt like Hyacinth Bucket telling him to take his boots off before he came in--LOL!)  He tackled the cords and moving stuff to get the modem out of the TV cabinet, told me he left the cable box open for Midco (Midcontinent) and went on his way.  Apparently there was another housebound lady in the adjoining building who needed a modem picked up, too--and he noticed he had forgotten to have the last lady sign her paperwork.  (You think CableOne is losing a few customers? hehe!)
****
Midco said 3pm, right?  I got a call at 2:50pm telling me he was on his way!  Right on time!  A very nice older gentleman arrived (who knew to take his boots off without being asked).  The cable box was open and he got the modem installed.  Took a while to get the signal working (now I know what these mysterious plates are for on the inside of the hall closet).  Then he tried to tackle connecting McLap to the WiFi--LOL!
****
He said he bought a Mac once and threw it out.  (I remember wanting to toss mine over the balcony many, many times the first six months I had it.)  I finally called Dagan at work (hope I didn't scare him--never, ever have called him at work) and between them (Dagan hates trying to figure out McLap, too) they found what they were looking for and got it connected.  The nice gentleman volunteered to connect my cell phone and my tablet to the Wifi, too.  Sweet!  And off he went.
****
I forgot about also needing to reconnect Chromecast (so I could watch on the TV screen and not the McLap screen).  Leah was trying to talk me through it on the phone, but I kept losing the cell phone connection.  (Remember that is really bad here.)  She was going to call me back after dinner, but she had gotten me far enough that I figured it out and got it working--tada!
****
But then I was watching Netflix last night and lost my internet connection.  I unplugged and replugged the modem and restarted McLap and it came back...but then I had to reconnect Chromecast, too.  I finally got it going again (and honestly wasn't sure what I did either time--LOL!)  I hope the losing internet was a fluke.  There's a lot of swtiching over going on around here.  Could have been an accident in the cable room in the building.  That happened to me several times over the years when I lived in West Winds around the end/beginning of the month when people were moving in and out and providers were messing around in the cable room.  I hope it was an aberrance and nothing more, right?
****
Then yesterday--made it to the dentist!  Leah gave me a ride.  No cavities.  Bye-bye.  See you later.  Done.  Whew!  :)
****
You know I have been in pretty poor physical shape since the move--well, I had to take a couple minutes to just sink into the pain of being in the chair before she could even start.  And after lying there for over half an hour (excellent, new-to-me, young girl cleaned my teeth who was gentle and thorough)...I had to sit on the side of the chair for a bit before I could even get down.  But I limped happily away to the waiting room and called Leah to tell her I was done.  Leah dropped me off at home and I was so exhausted I was in bed before 9pm.  (When you're in a fibro flare it doesn't take much at all to totally drain you--LOL!)
****
So I was up early and thought I'd say hi.  Woke up coughing and coughing (?) but it went away after a short time.  Odd because closing the vents seems to be helping with the dryness in here...and even when I had electric hair I didn't wake up coughing?  I'm still so stiff from the dentist's I can barely get out of this chair, but I keep getting up and walking and stretching...will thaw out a bit over the next few hours--and it will be less painful tomorrow.  Big sigh of relief to have that appointment over and done with.  One down!  Hurray!!
****
Karma's sleeping in the chair next to me, of course.  The wind is rumbling almost constantly against the building this morning.  So loud I thought there was a snow plow in the parking lot across the way--LOL!   But it's warmer again.  Supposed to get up to 36--so should be more melting by this afternoon.
****
I worked on getting my bullet journal set up for February yesterday, so that's all done.  I had to wait until I had internet to print off my bank statement to balance my checkbook, write bills, and budget--so I have that to do today after I thaw out quite a bit more.  Or tomorrow if blogging was enough for these old bones today.  ;)  (Yes, I still do my checkbook the old-fashioned way and balance to the penny every month.)  Leah is planning to come over for Crafts on Sunday.  Looks like an excellent dentist recovery day for me.
****
Have a really great weekend!!  :) :)
****
"Finish each day and be done with it. You have done what you could. Some blunders and absurdities have crept in; forget them as soon as you can. Tomorrow is a new day. You shall begin it serenely and with too high a spirit to be encumbered with your old nonsense."
Ralph Waldo Emerson
Posted by Rita at 8:46 AM