And a good Tuesday morning to you!
What's been happening since we last spoke a week ago?  Last Tuesday was such a nice day.  The grouse family came by several times... 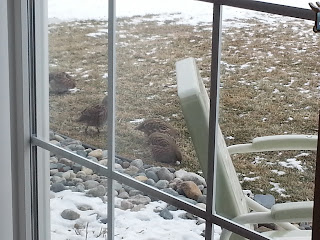 ...and even kind of parked themselves there next to my patio for about 20 minutes! 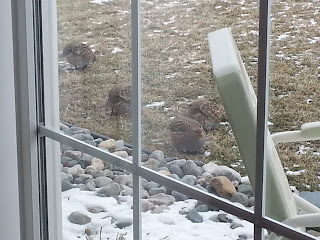 It's been awfully cold.  One night we had -20F...and it is -15F right now.  I wonder how the birds survive with their skinny little legs?  And the sparrows have even less body mass than the grouse..but they all survive.  Amazing to me.  Of course the fact that the native tribes and the pioneers survived these winters in tents and small cabins is even more amazing.
****
Anyways, Leah and Ian and I had planned to go to Cashwise on Wednesday so I could get the rest of my groceries that I couldn't get at the Natural Grocers. 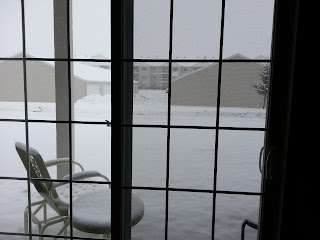 We had a winter storm passing through... 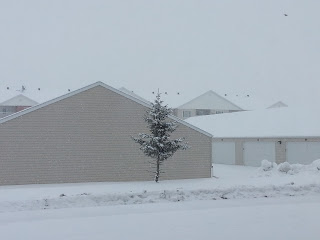 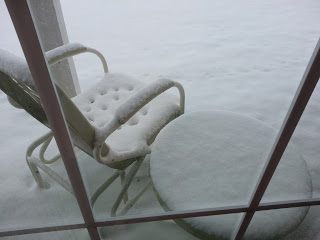 ...bringing Ian to Story Time, etc.  Was a pretty tame storm here in town.  But I wasn't feeling quite right enough to go anywhere so I had to pass.  I did take a short video for all my friends who don't get to see snow.  Funny--I was trying to see if I could show it against the garages across the way and it showed best up close right there on my patio--LOL!
I felt worse the next day...so passed again on going grocery shopping.  As you saw in the video and the pictures above, the whole ground was covered in snow.  But nature did her thing in no time (had been worried about the rabbits and grouse, of course)... 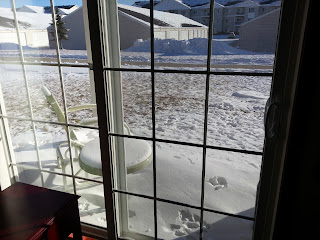 ...and cleared the grass patches here in the wind vortex. 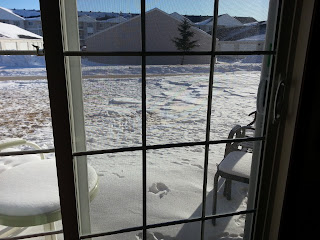 A day later...you can see how happy everybody was to see the grass--LOL! 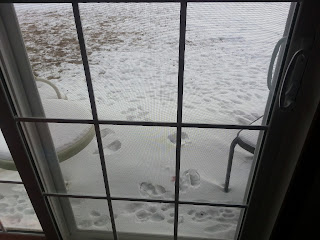 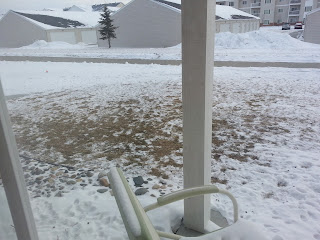 Must have been quite a night to behold. 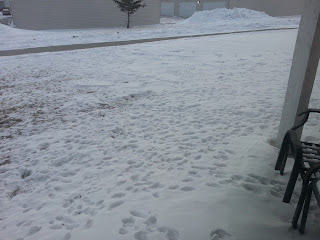 You'd have to enlarge this probably to see the amount of poop pellets left absolutely everywhere out there--LOL! 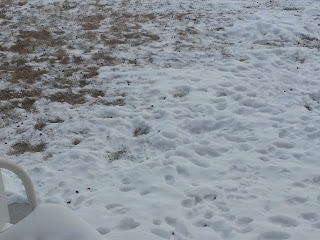 I hope rabbit and grouse poop is good fertilizer for the grass-LOL!  Does anyone know?
****
Well, by Thursday night I realized I was actually sick-sick.  Yes!  Again!  :(  After just being sick for over a month I caught something again!  This time it was some kind of intestinal flu with terrible all-over body pain, bend-you-over stomach cramps, low temp, and pounding headache...that lasted three days plus.
****
Now I had a doctor appointment scheduled for Monday.  Just one of those checkups you have to have in order for them to renew your BP pills.  Well, despite the dreadful stomach cramps...there was no pooping from me.  The only pooping around here was from Karma and rabbits and grouse.  Once in five days?  You really have to laugh when you know how I usually am dealing with the exact opposite problem!  (It's still making me chuckle right now!)
****
Nothing by Sunday so I went online and cancelled my Monday appointment.  [Good thing as I spent half of yesterday in the bathroom--ROFL!  We knew that was coming, right?]  Leah was going to give me a ride to the doctor's and then I was hoping I'd feel up to the grocery shopping afterwards.  THAT obviously wasn't happening.  But Leah was out and about (Monday is her errands day) and picked me up some groceries yesterday and dropped them off.  What a sweetheart!!
****
Was so windy that it looked like it was snowing sometimes.
Wind chill warnings--super cold! 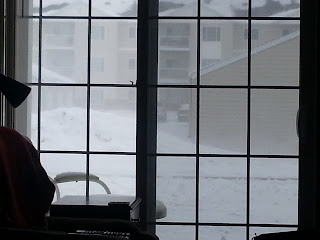 I ran my big white cart out to her car.  (Ian cried a little when he realized he wasn't coming in to visit--awww!)  But we have to wait until we know everybody is well.  Leah and Ian have a little bit of the sniffles and Leah said Dagan had a bit of a sore throat--and, apparently, they are now going to treat me like they did when I was in college...not going to expose me to germs.
****
I guess it's pretty obvious that my immune system has been beaten to a pulp by the move and the fibro has flared up and is determined to tease me and only truly subside when it is damn well good and ready.  Every time I feel better for a day or two--that is followed by a crash.  And now I am catching illnesses easily.  I haven't been sick like that--one right after the other--boom-boom--for years.  Granted, I have been pretty isolated the past eleven years--but I still am now.
****
When I was in such terrible shape and trying to finish college I caught everything that was going around and was continually sick.  The other students at Concordia knew I carried a separate pouch full of tissues and an assortment of over the counter medications and they came to me if they were sick (or needed to borrow a pen, paper clip, stapler, highlighter...different pouch--but that's another story).  Anyways, I don't want to see that happen again.
****
Obviously Leah doesn't, either.  I admitted to her that with this new feeling of safety here...I haven't been washing my hands after I go get mail or bring out the trash like I did living at West Winds.  I guess I have to be just as vigilant here when it comes to germs.  When Leah got home she texted me to remind me that after I put all the groceries away to wash my hands well--LOL!  And I had forgotten--ROFL!  How quickly we get out of habits.  A lot of doctors believe your immune system is compromised with fibro.  Ah...yah!
****
My mind is always ahead of my body...making plans...getting excited over this and that.  But my body is the boss of me.  I may not like it sometimes...but I have no choice in the matter.  Last time I moved (11 years ago next month) I was in such pathetic shape that it took me about a year to recover.  It took me a whole week before I would even let Dagan and Leah come over to even start helping me unpack.  They set up my bed, TV, found my towels and shower curtain, had things I could toast or nuke to eat and called me every day.  (I could barely feed myself or shower, to be honest.)
****
This move wasn't THAT bad and I am not in THAT bad of shape...but I am worse off from the move than I cared to admit to myself.  Pushed myself to unpack because I knew once it was done I was going to absolutely collapse...for a good while...and I didn't want nagging boxes all about me again, you know?
****
So, things may progress more slowly than I like--but I am not going to give up on doing more art this year and getting out more.  Just might take a lot longer than I'd hoped.  I was kind of sad about it all for a couple days...but I have an incurably (I hope) optimistic streak.  So, I am feeling much better--here in my lovely new home with the grouse and rabbits and Karma.  And even a new big comfy chair!  And Netflix and Downton Abbey!  It's not like my life isn't better than ever, you know?  I love my new home so much!
****
AND--Miss Karma is feeling better!!!  Maybe she had caught a bug, too?  Here she is waiting for me on the little rug closest to the frig for her canned food in the morning.  (The floors can be chilly.) 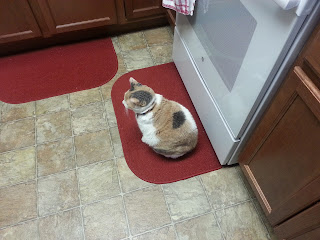 Underfoot as I scoop out a little... 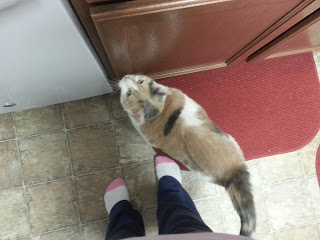 ...and nuke it for 6 seconds in the microwave to take off the chill. 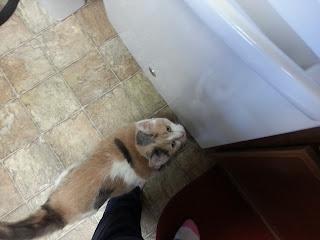 And--yes!  She's eating again!!  I got sick and she got well, I guess.  So that's good.  She still may not be acting her old self, but at least she's not acting sick-sick now.  She even wanted to chase a string toy one night!  I'm still keeping an eye on her, though.  ;)
****
So, I am just glad that I AM slowly getting back to my old self.  That doing laundry or making the bed or cooking up a pot of soup don't feel like climbing Mt. Everest all the time now.  I just saw the grouse go skittering by.  Karma is sleeping next to me in her chair by the kitchen table and ate up all her canned food this morning once again.  Whoever thought I'd be worried about Karma NOT eating--LOL!  Everything in life is relative.  I never thought I would have been worried about NOT pooping last week, either--ROFL!  All relative.
****
I just realized that I forgot to take a picture of my red cup for T-Stands For Tuesday. 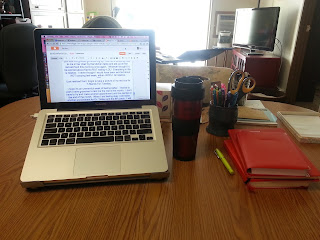 I really do love using my cell phone and dropbox.  ;)
****
Here's a picture of Miss Karma in her blogging spot, too. 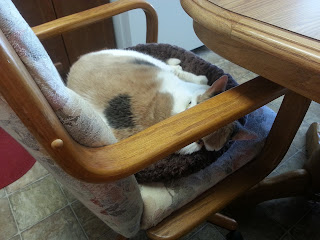 I hope it's an uneventful week of feeling better.  Thanks to Leah I have groceries to last me the rest of the month.  I don't have to try and make it to another appointment until the dentist at the end of the month.  When I am feeling okay I will make another appointment for Dr. Topley and the BP check.  Meanwhile, I will journal and write letters...and maybe get back in the studio to play a little soon.  I want to make it over to visit McFamily and have Leah cut my hair within the next month.  Meanwhile--today's project is making soup...and I can always make artsy/crafty plans.  Then I always have something to look forward to.
Life is good.  :):)
*****
Have a really good week!!
****
"This a wonderful day. I've never seen this one before."
Maya Angelou
Posted by Rita at 10:41 AM