Happy New Year!!
Grab a cuppa.  Lots to show you today.  I got short videos from Leah of Ian's adventures on his Christmas trip and the jackrabbits even passed by close to dusk.  Whoohoo!!
****
First of all we'll go back to Christmas.
I love how Ian sees Dad push a button one time and he remembers how it works.  Pays attention to everything, that boy.  :)
I have these all out of order I'm sure, but Ian went to a couple of different Christmas gatherings and on some adventures out in the cold.  Love the bow on the back of his head. 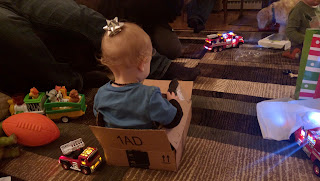 Boxes can be as fun as new toys, right? 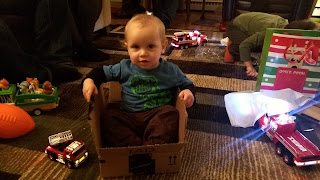 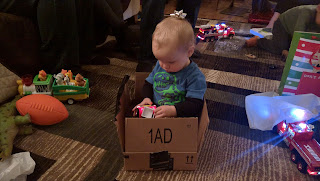 Trying on somebody's grown up moccasins. 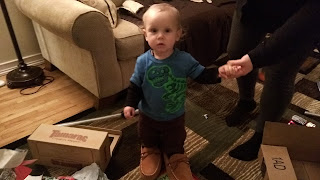 He was sledding a couple of places.

I love his Fargo hat!!  Daddy has one, too.  Good because it was very cold out.  Ian was at the point of no more smiles and high fives by this video, Leah said.  Time to go in and warm up.

He went on his very first horse ride.  Serious, but wasn't scared at all. 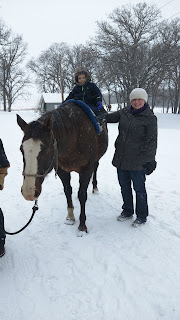 A SIL took this video.  Thanks, Brittany! 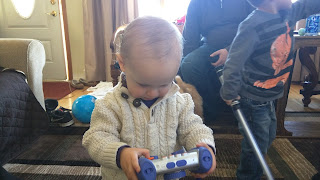 Notice the light saber Dylan has?  The young ones today are just as into Star Wars, I guess. 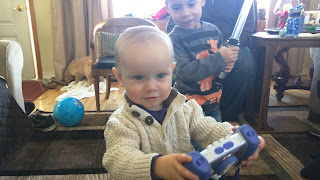 Looks like Ian was happy with his own camera. 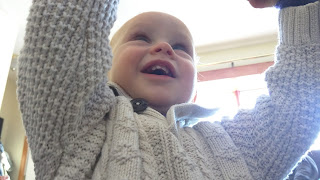 There were puppies around, too. 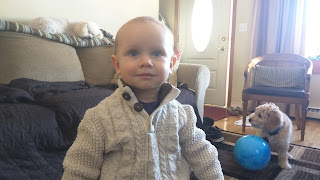 Ian was shown how to start the musical ornament on this tree and did so every time he went by. 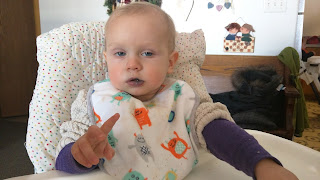 What a Christmas!  :) :)
****
Myself--on New Year's Eve I joined this "Ring In The New Year Coast To Coast "event on a Google business hangout.  Started at 9pm central and went till 2:30am.  (They may have gone longer but that is when I left the party}.  I had no idea how such things work, but I didn't have to worry about being dressed or combing my hair--LOL!  The hosts were the only one on camera and the rest of us were in a chatroom.  There was a lot of laughing, they did a couple follow along painting/art challenges with a Pictionery game session in between.  I never thought I would be there that long but it was rather funny to watch and listen to them get a little tipsy as the night went on--LOL!  And they are so talented that they can still make pretty art after five hours of sippy imbibing!
****
I did the first play along challenge.  They told you what to use and when I heard the first thing was a paint I actually had but hadn't used yet...I decided to go for it.  (One of my goals for 2016 is to really dig into my supplies--especially the ones I am afraid of.)  So I grabbed the old Moleskine journal I am trying to use up and just slopped stuff down.  (That's leftover paint on the right hand side.) 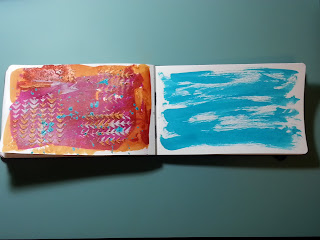 They picked Quinacridone Magenta first and I had some in High Flow Golden so I scraped some of that on with a plastic card.  (I'm always afraid to use the few Goldens I own because they are so expensive and I have small bottles--but am determined this year to just go for it and use these "scary" supplies--LOL!) 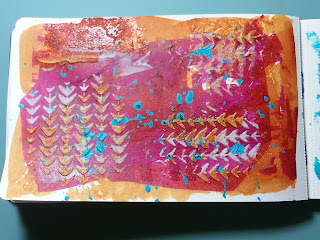 You could use any similar products if you didn't have what they picked.  They said use some kind of modeling paste and a stencil.  So I used one of the new stencils I won recently from Cindy Utter on youtube and drug out a jar of this very old Lascaux modeling paste B (silica sand/rough surface).  I bought some modeling paste about 18-20 years ago when I wanted to learn how to play with acrylics--long before they use it all the time now with art journaling and mixed media.  The stuff on the cover seal (upper attempts on the page) was mostly dry and didn't spread.  But the paste inside of the jar worked really well, I couldn't believe it!  This was also exciting to me because, believe it or not, I have never used modeling paste with a stencil before.  The genie is out of the bottle now!  ;)
****
The next was Quinacridone Nickle Azo Gold.  It is really transparent and was fun to play with--kind of an orange-y gold.  I put that on with a big brush.  Then they said cobalt turquoise.  Don't have that, but I did have some teal paint--so I splattered that on.
****
I made a mess when I splattered (something else I have only done a couple times) that took a while to clean up...and I did spend a long bit of time completely cleaning off the cover seal on the modeling paste jar...well, you know how I am--LOL!  It doesn't look like anything, but everything I used was new to me so I learned a lot.  Well, I know I actually tried the modeling paste but it was so very long ago I have no memory of it and think I tried to mix it with paint or something.  Anyways, that was enough of an adventure for me--LOL!
****
I had to shut off the laptop for half an hour or so to do my New Year's Eve ceremony at midnight.  I almost forgot to take a picture at all.  Had put away the Tibetan Bell and the couple of crystals I got out, but I'll show you the card I picked for 2016. 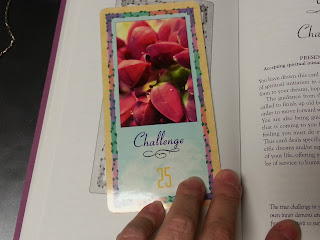 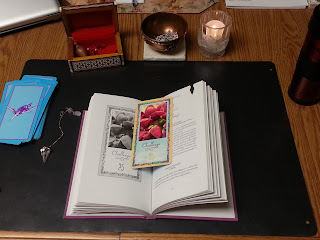 So appropriate.
I have been doing well with the added "challenges" to my morning routine.  Been enjoying the writing/journaling prompt stickers.  I purposefully did not read them so that I am surprised every day.
****
I've been doing the little something artsy in the small journals every day.  So far nothing but blobby background stuff--but it feels wonderful!  And I am trying out new products.  My first time using the Dylusions paint pots...used makeup sponges and wiped off the extra color all over the upper right side page and I like that the best--LOL! 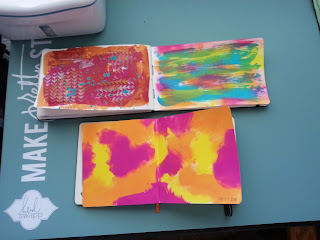 Just playing about and doing a little something every day.  Already discovered that I am not sticking only to the small journals.  But am happy when I am doing anything creative each day.  I got out some old zendala prints from that group that used to be online.  I have tons of them I printed off from before I started and ones I never got around to doing--so these will be fun. 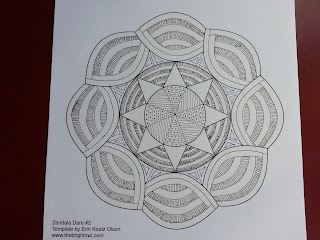 You know I never did use too many of the official zentangles and just did my own thing doodling... 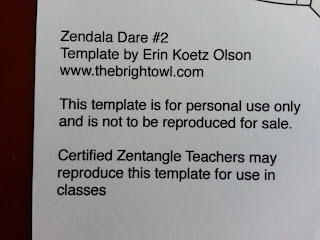 ...but I find them relaxing to do while I am watching TV.  Just feels good to have out the paint and drawing pens and stencils, etc.  Yup!  Going to be a fun, challenging year!
****
Last but not least--twas the end of the day... 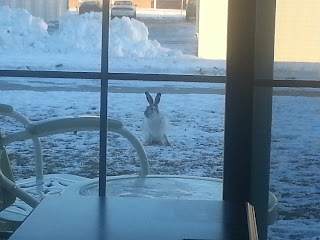 ...and what did I spy (looks like it may have been spying right back at me)... 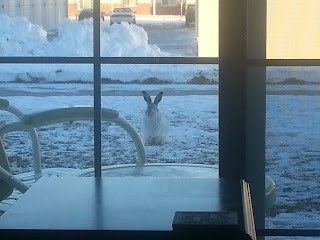 ...but a visiting jackrabbit.  Calm enough to be cleaning his or her foot. 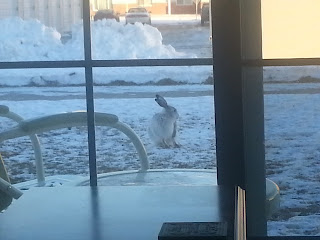 I usually have only seen one at a time and it would be racing down along those garages across the way.  Only once before have I seen two at the same time loping by. 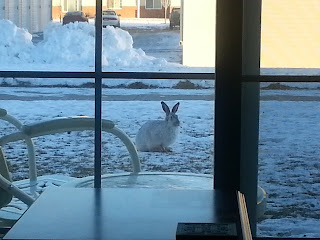 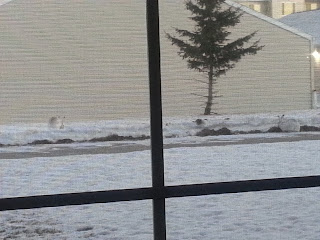 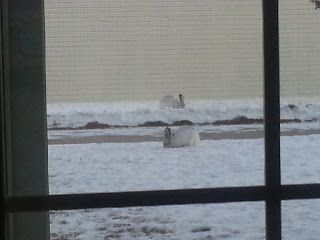 They took off because someone with a dog walked by.  Man!  Can they run fast when they need to!
****
A while later...closer to Jackrabbit Nightclub time...
Five of them!!  Do you believe it?  (Obviously you can tell I never expected to see more than two because I stood up and went to the window--surprised they never noticed me because the grouse surely would have.)  They are really beautifully marked.  Love the black tips on their ears.  They did not come back before dark, but seeing them gathering for the nighttime Jackrabbit Party made my day!  :)
****
Speaking of challenges...
Tomorrow Leah, Ian, and I are going grocery shopping.  Caroline had her little boy, Parker, and is on maternity leave for six weeks.  As long as I have not been grocery shopping for over ten years I wanted to try out this newer natural foods grocery store in town.  Smaller store for me for all the walking is a plus, too.  I think it is kind of like a Whole Foods or some of the Co-Ops I used to shop at in Minneapolis.  I'm hoping it's a good leg day (sciatica) tomorrow.
****
Anyways, see you Tuesday (if I am functional enough to blog--LOL!).  Hope you all had a wonderful start to this fresh new year.
*love and hugs*
****
“If you aren't in over your head, how do you know how tall you are?”
T.S. Eliot
Posted by Rita at 1:41 PM