Good Morning!
It's 21 degrees and mostly sunny this morning. 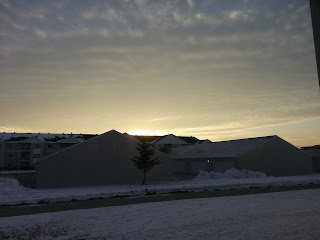 No videos or tons of pictures today because I forgot to take any when Leah, Ian and I went shopping yesterday at the Natural Grocers.  But I can show you a few things I purchased.  Used to be the old Office Depot and it was like one huge, extremely well-stocked, natural foods department.  Fun!  I couldn't do all my shopping there so we will have to make another trip over to Cashwise (probably this week) but I really enjoyed it!  Leah and I may go there every other month--well, she does already, so let's just say I might go with her--LOL!  (Another one of my goals for 2016 is to get out of the apartment more often.)
****
One thing I found interesting is that their bulk foods are all pre-packaged and not in bins.  Like the oatmeal you see here.  I am not crazy about that because if you only wanted a smaller amount there is no choice, you know?  Everything you'd find in bulk bins--from spices to nuts--all prepackaged.  They keep all the nuts and a lot of other bulk items refrigerated. 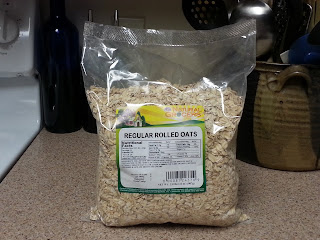 Ian loves Annie's bunny crackers (and now Gramma does, too) so I stocked up on those. 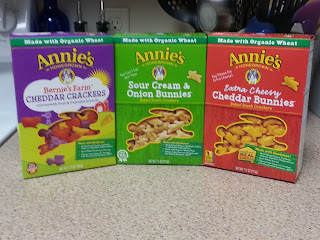 The best deal was the Quorn you've heard me talk about.  My meat substitute of choice!  They were a dollar cheaper there!!  Shock!  (Because most things were more expensive since everything is organic, etc--like almost $4 for my celery!)  So I will want to come back every other month and stock up on my Quorn!  The only thing they didn't have was the burgers (see that package is opened).  I'll have to get that at Cashwise...unless they were just out of them yesterday at Natural Grocers? 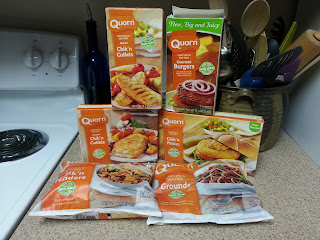 Not much choice on the Almond Milk.  I was kind of surprised they had Silk since they have very little of what you'd normally find in a regular grocery store--but I don't like Silk.  Too thick and sweet for me.  So I tried this almond milk in the crazy bottle since it was on sale.  Pretty good! 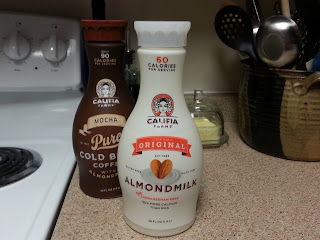 And I couldn't resist a big bottle of this!  Pure cold brewed mocha coffee made with almond milk by the same company. 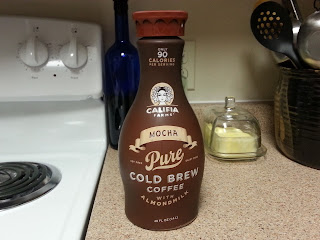 I used to have a Misto oil sprayer but with my bum arm I couldn't pump it properly.  Then the mister broke anyways and only squirted out a stream of oil.  Leah had seen this Evo brand one over there and thought of me.  It's huge, but is a regular pump sprayer for oil.  (These are instead of buying Pam or something like that and can be refilled with whatever oils you like.)  I decided to try this one.  Should be a lot easier for me.  I will only have to squeeze the trigger to pump with my good arm--tada! 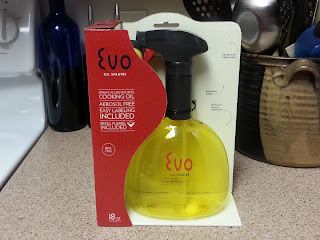 Anyways, I was absolutely delighted that I made it shopping AND my leg behaved the whole trip!!
Kind of amazing--whoohoo!!  I'm very sore (back) today, but that is totally normal.  So I am one happy camper.  :)  Ian had a nice long nap before we left.  He is such a happy little shopper.  (The one clerk said he gave her baby fever--LOL!)
****
But this morning...
Karma didn't even get up off the chair...that she might have slept on all night because that is where she was when I went to bed.  Totally unlike her.  She gets her morning treat of her bit of canned food and is usually under my feet. 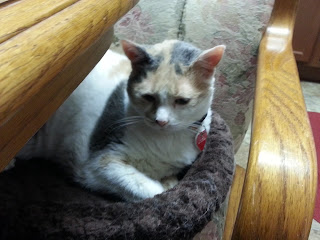 Granted, I was so tired that I was in bed way earlier than my normal and up way before the sun...but that has never stopped her before. 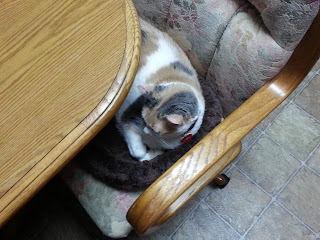 Truth is, she hasn't quite been herself since before we moved.  I had chocked it up to her getting older.  (She'll be 11 next month.)  Her appetite comes and goes.  Especially the last couple months.  She walks around complaining sometimes for no apparent reason.  Even in the middle of the night I hear her yowling sometimes.  But Karma has always announced when she's left the cat box, so I just took it that she'd done her business and, no matter what time of day or night, was announcing it to the world, as she is wont to do.
****
I got her heaping tablespoon of canned food in her special canned food dish and nuked it for her 6 seconds to take the chill off...she only sat up in the chair, but didn't jump down even.  I brought it in the pantry.  Karma just sat in the chair and meowed to me.  I thought maybe she was extra stiff from sleeping up there all night so I carried her into the pantry.  She ignored the food--sat there a while.  I came back in the kitchen to give her some privacy.  But I watched her go over to the catbox...and pee on the little rug right in front of the cat box!!
****
And--no--it wasn't dirty.
I scoop it every day.
****
I scolded her.  Rinsed out the spot on the rug--and found evidence on the back side that this was the second time she had done this!
****
Meanwhile she came back up and sat in the chair next to me.  We made amends.   When suddenly she made that--I don't feel well, low in the throat--cry.  She jumped down and next thing she is looking for a place to barf.  She did--a couple times.  Since then, she has come back to sleep next to me and I have washed the rug and it is tumbling about now in the dryer. 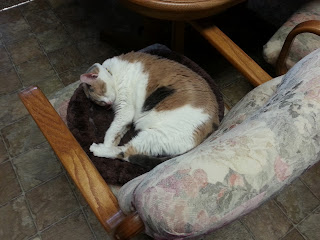 This has happened off and on for the past year--the barfing, I mean.  She even peed outside of her box a couple of times (long after her UTI) before we moved, but I figured it was due to the chaos of the move because she hadn't done it since we moved.  That I know of.  Now, I wonder if she has gone anywhere else?  I haven't noticed any odors or spots?  I shall have to pay closer attention in the future.  But I doubt it.  Even when she was so sick with the UTI--and she did pee right outside her cat box then several times and I had plastic and towels down--she always managed to make it to right near the cat box, so I doubt it.  Unless she's going senile, of course.
****
I hope she's okay.  She was never a barfer until the last year or so.  And it's not hairballs.  Just food.  I haven't said too much about it because now she might be okay for a month or two.  But she's not quite been herself, you know?  Sleeps even more than she used to--which I didn't think was even feline-possible--LOL!  She's been a lot stiffer walking the last couple years.  Just getting older, for sure.
****
I really hope it's nothing else.  But you know how beyond stressed and terrified she gets with vet visits.  Even her vets know it is better if I don't have to bring her in.  They didn't even take her out of her plastic carrier last time.  Just removed the whole top half for her exam and I stayed with her head as she is not as likely to bite me--LOL!  They had me pick her up to weigh her.  Karma gets so scared she pants and drools!  Poor thing.  So I don't want to bring her in unless I have something concrete to tell them.  She just had that checkup in July before we moved...
****
I'm going to cut down the entryway scoop in the tub inside the cat box so it isn't as hard for her to get in and out.  That might be the problem with the peeing outside the box?  Maybe when she's extra stiff legged?  (Please ignore the scattered litter--LOL!) 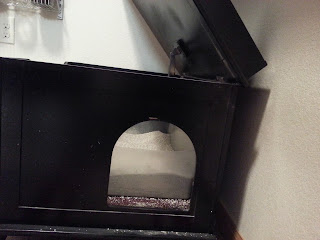 She has to go in and then up and over. 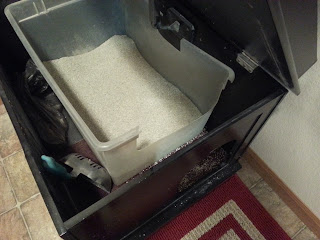 So I'll ask Leah what she used to cut that down.
****
Sorry to go on about Miss Karma.  The occasional barfing is one thing--but the peeing reminds me of when she was so sick for so long with that UTI and worries me more.  There was no blood or pink or anything though--whew!  I'll keep you informed.
****
Right now she's curled up in her chair beside me.  I already drank this cup of mocha coffee--and it was not bad!  Not exactly iced coffee weather--LOL!  It doesn't say anywhere on the bottle that you can't heat it up, so I might try it hot next cup. 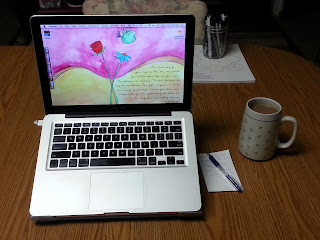 Meanwhile, my red thermal cup is there right now--LOL!  All of you at T-Stands For Tuesday have seen that a million times.  ;)
****
Oh--BTW--if any of you missed my last post--there's lots of Ian pics and short videos of his Christmas adventures (even horseback riding!) and I caught a Jackrabbit Party video, too!
****
Well, that's it, I guess.  Except for the Karma concerns, life has been truly excellent.  I still can't believe my leg didn't go wonky grocery shopping--whoohoo!!  I had such a good time with Leah and Ian...even though that wind was freezing cold and thundered against the building last night for hours.  Miss Karma will get extra cuddles today...IF she'll allow it.  Definitely extra chair time.  ;)  She loves the new recliner.
****
Hug somebody today.
Two legs or four.  :)
****
“Love is like the wind, you can't see it but you can feel it.”
Nicholas Sparks
Posted by Rita at 11:20 AM