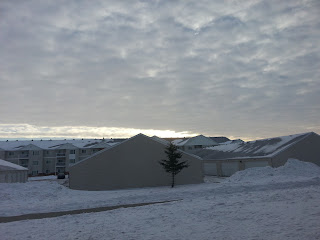 First of all Tuesday night that big kitchen ceiling light you see there kind of sizzled and popped in sudden death throes.  Was too late to call maintenance, so I had to wait until Wednesday. 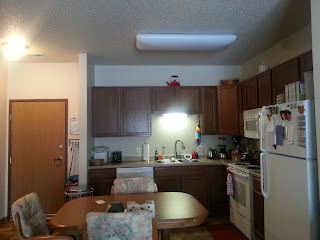 Which meant Wednesday (and Thursday) morning I had to change up my writing routine and move over to the desk for light...which Miss Karma was not happy about...at all. 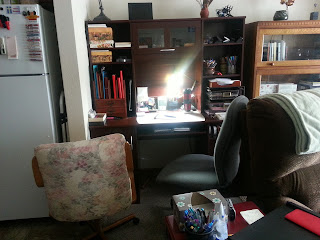 She wandered through the kitchen and living room crying until I moved "her" chair over next to me (has to be on the left side so I can occasionally reach down to pet her or lay my left hand on her while I am using my right hand).  Karma is not a big fan of change--ROFL! 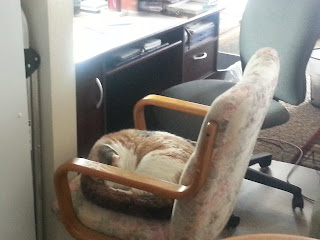 But she finally settled down after I rolled a chair over and rubbed her belly for a long while.
****
Two maintenance guys came Wednesday afternoon and took the light fixture apart.  There are four light bulbs in there!  No wonder it is so wonderfully bright.  Was awful dark in here at night without it, that's for sure. 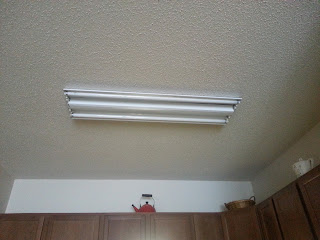 They said it was the ballast/transformer thingie...had to bring a new one the next day.  So we stored two long light bulbs and the cover in the hall closet...which Karma had to check out the second the scary men left, of course. 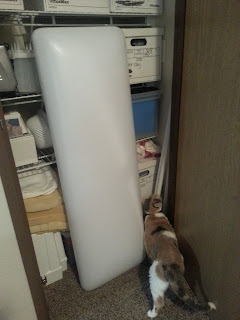 While they were here I asked them whether it was okay to close the air exchange vents and they said yes, but it was good to have the fresh air.  Well, I have never lived in an apartment with air exchange before.  It is so dry in here that running two humidifiers 24 hours a day and I am still getting shocks, my cuticles are peeling/bleeding, pants stick to my legs, my hair sticks to my face and flies out in rays from my head.  Awful!
****
Anyways, Dagan came over after work that night and helped me clean (since Caroline is on maternity leave with her new little boy, Parker).  I dusted and Dagan did all the floors and bathroom for me.  I had him close those vents.  This one by the front door where the air comes in... 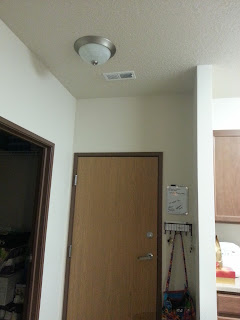 ...and this one in the bathroom where the air gets sucked out.  It felt like I have been running the humidifiers night and day for nothing.  That it all got sucked right up and out of the ceiling.  Time will tell, eh? 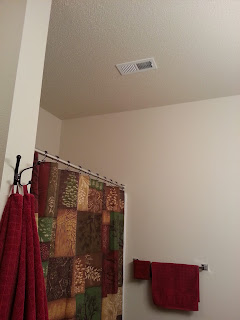 Been ridiculously dry.  Poor Karma has been scratching herself so hard that she made an ear bleed!  And she has no claws!
****
Leah and Ian made a really quick stop yesterday...arrived as the maintenance man was almost done replacing the ballast.  (Let there be light!!)  Leah came with her jig saw and cut down the inside tub for Karma's arthritic bones. 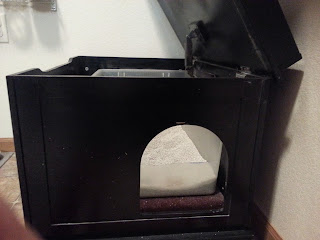 I know it's hard to tell but it is about an inch and a half lower--tada! 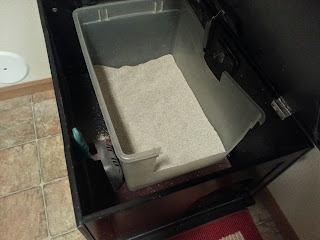 They had to hurry off to the grocery store and needed to get home to finish packing because they are heading to waaay up in northern Minnesota (Warroad) to visit Dagan's half-brother and his family this weekend.  :)
****
All the changes and hubbub...Karma disappeared last night.  I found her sleeping in her stroller in the pantry--LOL!  She just needed some peace and quiet, I guess. 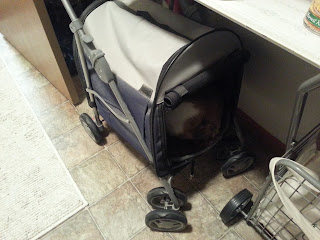 So she missed the rare close-up jackrabbit sighting! 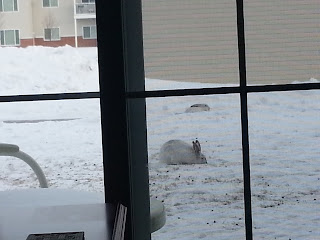 We usually only see two of them racing past and that is maybe only once or twice a week.  They so rarely ever stop in the daytime...even if I know full well they party out here at night--can you see all the rabbit poop?  LOL!


This morning you can see the many rabbit digging spots all over the lawn...and I could just imagine their furry feet going to town. 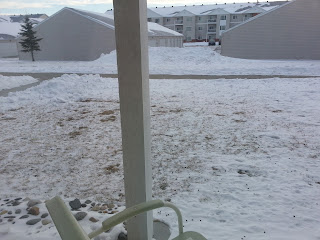 The grouse appreciate it.  Not that they don't also scratch away with their little feet, but the rabbits make bigger grass nibbling spots.  :)
****
Well, let's see.  Other stuff happening...
Google/Blogger made some changes on the 11th effecting commenting on blogs if you don't have a gmail account.  Won't allow it!  (Trying to take over the world, I tell you!)
****
Netflix has changed everything.
****
I hate it.
****
It is a lot harder to use and now on streaming I have no information about the choices from my list queue like I used to have.  Can't tell by looking if it is a documentary, drama, comedy...no information on that anymore.  Not even if you hover over the movie--no box will pop up with a description like it will on the DVD rental queue.  You know how OCD I can be.  All these years I have had my queue organized by type.  So if I was in the mood for a thriller I could scroll down to the thrillers, etc.  Same on my DVD rental queue.  I'd pop up to the top what I was in the mood for.  No longer.  After a decade--no longer can use Netflix at all the way I used to.  Gone.  Thwarted.
****
Oh and--say you hear about a movie on a blog...if you are in streaming and the movie is in the rental list...it won't show up as even available on Netflix elsewhere...only checks streaming.  You have to go to each place individually and type it in twice--awk!  How stupid is that?  From what Netflix has said, it appears that they have revamped their sight so that it is easier for people to use streaming on tablets and phones.
****
I hate it.
****
Some good news, though...I hope!  Midcontinent is now in the building!  Which means I can call them and see if I can switch over my internet from CableOne.  If Midcontinent has unlimited access (like we think they do--but it doesn't say anything specifically about that in the material they left hanging on our doorknobs) then I can say goodbye to CableOne.  Good grief!  I am paying $95 for only internet--no phone, no TV--just internet.  Cross your fingers!  :)
****
And now for something completely different...
****
...on a deep soul level...
****
Do you have recurring dreams?
I had these dreams since I was a kid of being able to kind of run, leap and float through the air even up over the treetops.  I absolutely loved the soaring and floating...but I had to come down from this running leap.  When I would lose momentum--wham--I'd be rapidly free-falling!  Went from wonderful to terrifying!  (For one thing, I am afraid of heights to begin with--LOL!)  I would always wake up before I hit the ground.
****
A couple of years after I moved to Fargo (my former apartment) I had one of the dreams...but...to my amazement...I was suddenly, miraculously able to land safely and gently on the ground!!  After a few of those dreams with the safe landings I wasn't afraid when I was losing altitude anymore and haven't had the floating dreams again.   Was a huge deal to me.  (I do miss the floating, though.)
****
Another dream I have had in various forms since I was a kid was that somebody is after me and I am trying to lock the door--and it won't lock.  I often can't even see who is after me or chased me into the house...sometimes the lock is broken or there's a big gap between the door and the frame or they start pushing before I can close the door.  Scary dreams...wake up in a panic dreams.
****
I just had the dream a couple mornings ago...and I could see the men coming out of the dark...but I made it inside...and locked the door.  The door locked!  I was safe.  I woke up feeling so very safe.  :)
****
This feels like an even bigger deal to me than the safe landing of the floating dreams.  This meant I actually feel safe here on an even deeper level than I ever have before.  And it just tickles me to no end.  Fills me with such gratitude and love.  I wouldn't be here at all if it weren't for Dagan and Leah.  I wouldn't have even been in my last place without their help, either...but even more so here in our new home.  *she says as the grouse go chittering by*
****
Dagan and Leah will never truly know how much I love them...because it is impossible to even put into words.  :):)
****
Meanwhile, back at the ranch...LOL! 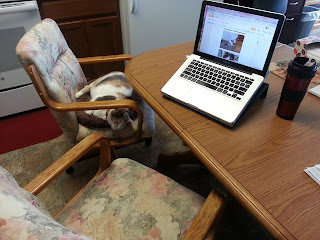 Miss Karma was just thrilled that things were back to our normal routine this morning and she was in her spot by the kitchen table. 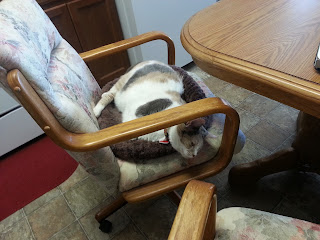 Life is good.
(Despite Google and Netflix and CableOne--and fried light fixtures and hair sticking to my cheek--LOL!)
****
Life is so damn good!!
And it just keeps getting better and better!!
****
"Happiness is not what makes us grateful. It is gratefulness that makes us happy."
Br. David Steindl-Rast
Posted by Rita at 12:41 PM