Sometimes I wonder where Karma has gone when I haven't seen her for a while--and she'll be sitting in some odd spot--like here in the corner of the bedroom. She must just figure she hasn't parked herself on that particular spot for a while? 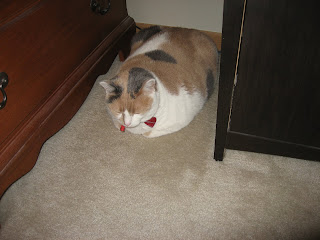 Pull any chair out of its normal position and you will have a cat sitting in it within a couple minutes--so I move the chairs around for the heck of it sometimes--hehe! Here she's watching the fish. 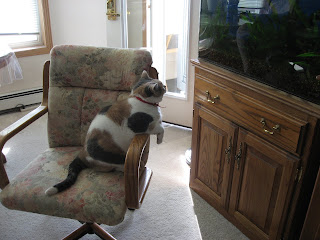 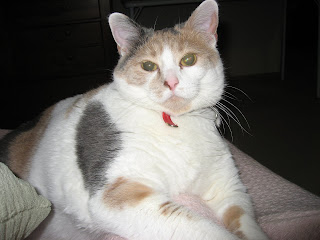 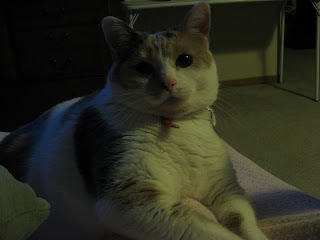 I forgot to say that Dagan and Leah went to their bankruptcy hearing last Friday. I think that means they will have it finalized in two months? Finally! :)
Much to my surprise I read online that there were 40 ships hijacked last year! Why don't we ever hear about these pirates? I am glad the captain is okay and has been rescued. What a brave man to offer himself for his crew! :)
I watched Sicko last night. Leah told me I should rent it. I have been uninsured off and on my whole life, so I know how our system works--or doesn't work. How without insurance or good insurance coverage you can't afford to go to the doctor, dentist, or eyedoctor--so you wait (like I just did) until you are forced to go because something bad has gone wrong.
And even when you have insurance--like I did when I hurt my arm at that factory back in 1995--workman's comp forced me to re-injure my arm three times before they let me go and I ended up with a much worse permanent injury than I had in the first place. But they tell you that you have to do this or that (even if the doctor says you shouldn't) or they will say you are "uncooperative" and kick you off your compensation--(was non-union). They can make you go to another doctor and another one--until they find one who will barely look at you and say you can do the work--and you end up in the emergency room again--and again. They try to find ways to kick you off so they don't have to pay you. You are treated like a liar and a leper if you are costing them money--unless it is something easy and quick and you can be back on the job in a couple days--you become the enemy.
You almost don't want to be chronically sick or badly injured in this country unless you are independently wealthy or live with somebody who can completely support you. I was like so many Americans--a couple of paychecks away from financial ruin. One bad accident and you lose everything.
Anyways, Sicko was quite emotional for me to watch.
Michael Moore sets his sights on the plight of the uninsured in this eye-opening, Oscar-nominated documentary. In the world's richest country, 45 million people have no health insurance, while HMOs grow in size and wealth. Moore also explores the widespread use of antidepressants and their possible link to violent behavior. With his trademark humor and confrontational style, Moore asks the difficult questions to get to the truth behind today's health care.
Hit so close to home that I found myself in tears for the people in the movie--many times. Made me want to move to Canada or Norway! Our medical system is such a cash cow for some many corporations--they have a stranglehold on it and won't let go. Bottom line is money--people don't really matter to them. The insurance companies make the policies for the clinics and hospitals--not the doctors, anymore.
Anyways, speaking of health--I am waiting to hear back from Dr. Magid's nurse (oral surgeon). The swelling went down yesterday it doesn't hurt as much again (of course--it's Monday, right?), but I still have questions. The back of the stitches are so tender still and my stitches haven't "dissolved" yet after 2 1/2 weeks? I want to know if all of this is normal or not? Could even be that the stitches pulling could be causing the pain--who knows? I'll find out--eventually. :):)
It's a cloudy day and supposed to get up into the mid 50's. I guess I'll fill you in tomorrow as to what I find out today. :)
Posted by Rita at 11:15 AM

Your description of what you went through with your arm and compensation board is exactly what the insurance company put my daughter through after the car accident. The insurance company of the 'at fault' driver tried every low-handed trick in the book to get out of paying Michelle a large sum of money for personal injury. They even cut off her treatments on and off over the past year because they weren't seeing fast enough results in her healing which, obviously, put her back to square one with her injury. Michelle's lawyer sent her to two independent doctors to confirm what her own doctors said...that she could no longer work due to her injury, that she sustained 30% permanent loss of mobility in all directions and that her injury is expected to get worse....her quality of life compared to before the accident had diminished significantly due to her daily pain and suffering. However, the 'at fault' driver's insurance company sent her to 'their' chosen doctor who barely even looked at Michelle and, after just a 10 minute consultation, deemed that there was nothing wrong with Michelle. SCREAM!!! He, of course, gets paid a very nice sum of money from the insurance company to say what they want him to say....I can't believe that professional people can be basically paid off like that and not care what effect they are having on an injured person's life. HIS report has been dramatically effected Michelle's case despite the obvious...that he was paid by the insurance company and his findings are the total opposite to what the other doctors say. They get away with because they say it's his opinion. They shouldn't be allowed to get away with it but they do.

Sorry for the rant. It's so hard being a Mum and watching your daughter go through hell because some insurance company wants to save themselves some money. It's shameful.

I've got the movie but haven't watched it yet.

LOVE the pic of Karma watching the fish. :)

I hope all goes well with Leah and Dagan re. bankruptsy case.

Sounds like you have similar problems in Australia! I know exactly what you mean about them sending you to a doctor who will quickly say nothing is wrong with you and isn't able to look you in the eye--obviously paid off to give a clean bill of health regardless of other doctor's opinions or what they can see with their own eyes. Mine was workman's comp insurance and hers is auto insurance--but same types of problems. My heart goes out to her! I hope she has a good lawyer! I didn't. Wasn't worth that much to a lawyer--tried two of them. If I'd lost my hand or arm or something they'd have been much more interested. Sad, but true. Anyways, give Michelle a hug from me!! :)