UPDATE:
I recorded both the local news shows last night.
Here's pictures from Channel 6 (ABC) of the apartment complex fire.
I watched this newscast first. 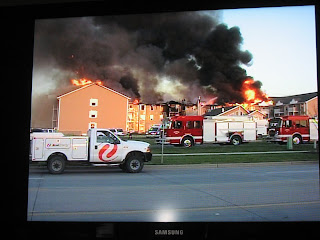 This complex is about three blocks south of mine on the same street.
You could see the billowing black smoke for miles. 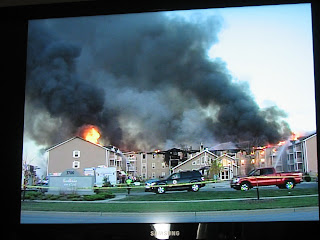 ABC also covered the Home Makeover being wrapped up in Moorhead, Minnesota--our twin city across the river. I imagine this might air either later this season or next season. I don't know how far ahead they build these homes. 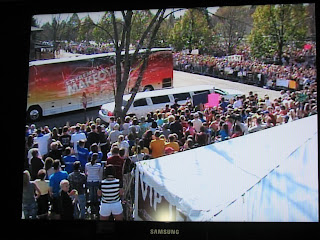 Here's the family after the "Move that bus" event. 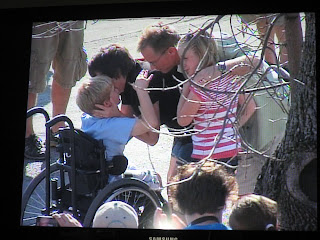 The family did a lot of interviews and looked a bit tired--but very happy. Here's the mom.. 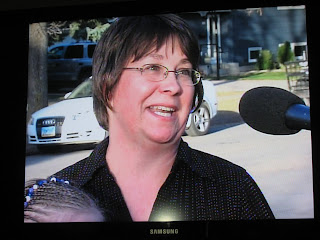 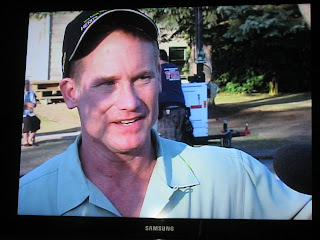 ...and the cutie pie son in a wheelchair. They didn't show a close-up of the daughter. 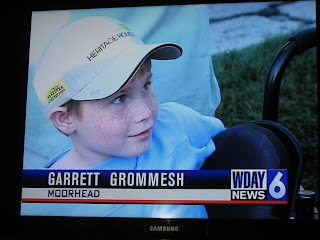 But--here they all are waving to spectators and local press. No one but the Home Makeover TV crew was allowed inside the house, they said. I'll have to watch for this family from Moorhead on the program. 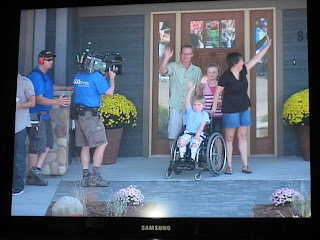 Then I watched Channel 11 (CBS & NBC have combined up here some time ago, so the news is the same exact program on channel 4 and 11). Maybe combining gives them an advantage? They had better coverage.
****
They already knew last night that 150+ people were homeless. The surrounding neighbors rushed in to help people as they escaped the building. No fire alarm went off??!! People were calling 911 right and left. (Made me really glad ours works!! I wonder if they had a working fire alarm in the first place?) 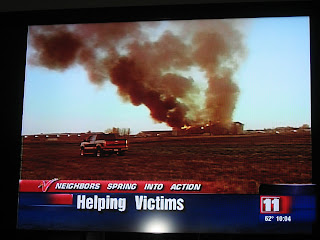 It was a five alarm fire--that raged into the night. 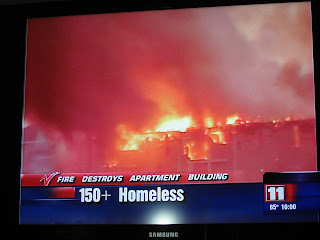 They already had obtained photos from a bystander and knew how it had started and where it had started. (Well, they do have twitter and facebook--used to follow them--and people can take pictures with their phones these days and send them photos in seconds.) The fire started down on first floor--a resident was using a barbecue on their balcony. Something obviously went very wrong. ?? 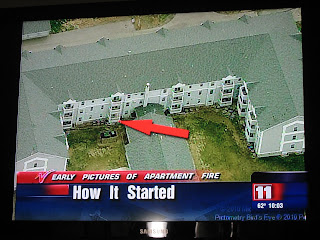 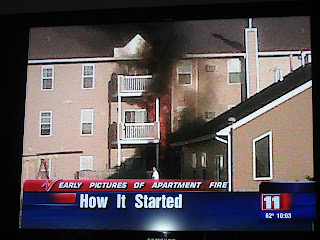 Terrifying how quickly the fire spread up the balconies to the roof! 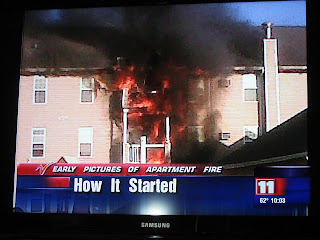 And no alarm went off!! It is amazing that no one died! 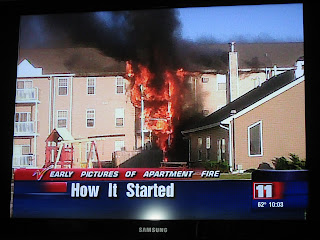 This young girl was arriving home just as the fire started... 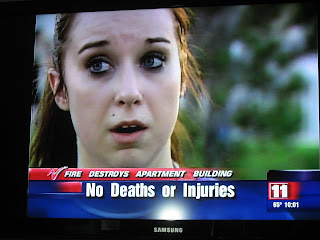 ...and raced up the smoky steps to third floor to rescue her dog. 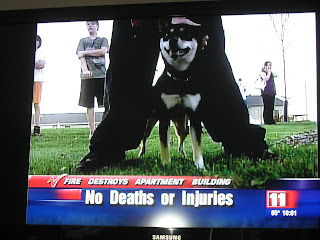 This dog was also rescued from first floor by the owners who had just gotten home. 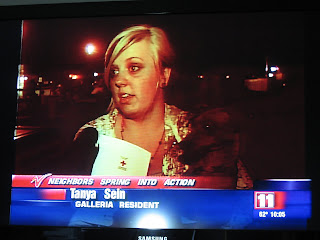 They didn't say if all the pets survived, but a local church was taking in pets with the help of the humane society. 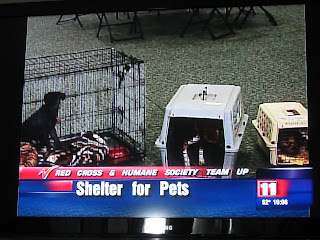 I did hear that no humans needed to stay at the church last night. Everyone stayed with friends, relatives, or volunteers who took them in--even most of the pets, too.
****
The entire road was closed from 32nd Ave down to 40th for hours. The apartment was on 37th. I'm on 34th.
****
Just seeing such a similar complex go up in flames so quickly...makes you count your blessings, that's for sure.
****
I am so glad everyone got out. There were even two firemen who were trapped when the roof caved in, but they were rescued and even continued on with the firefighting after they were deemed okay to return to battle. I hope all the animals survived, too.
****
And I am so grateful I have people who cared enough to call and make sure Miss Karma and I were okay. :) :) :)
****
Be safe!!
Count your blessings!!
Posted by Rita at 1:47 PM

When I saw that on the news tonight I immediately thought of you and sure hoped it wasnt your apts. I hate that it happened to anyone and Im so glad that no one did die. It is so great how people pull together to help others out in need when something bad like that happens. Im so glad you are ok and miss Karma too :o) I hope the rest of your week goes well for you.

I'm so relieved it wasn't your building but I feel so bad for all the people affected by this fire and will hold them in my thoughts. It's lovely that people got together and were there for them. I imagine the poor person cooking on that barbecue is feeling terrible right now. I wonder what went wrong. It must have been frightening for them with no fire alarms warning them. No doubt, the building managers will be held accountable on that score.

First I want to say I'm glad you are safe - and that those that lived in the place that burned down are safe too - as well as a number of their pets (who probably are killed more often than not in these sort of things).

It reached 8 alarms and leveled the entire complex. Over 400 people lost their homes, personal belongings, pets...

...and the sad part is that no one was ever charged with anything - the town's building inspector seems to have been seriously asleep on the job.

Wow, what a terrible blaze, and to think it all started because of someone carelessly cooking where they shouldn't be cooking. It's amazing no one was hurt. Amazing photos on the TV news.

I'm thankful this wasn't your apartment complex, but it sounds pretty close to you. I'm glad you have people who check on you, too. :)

Lynn--OMGosh! You saw the fire on the news in North Carolina? That's a surprise!

They were already starting donations that night--clothing, pet supplies, cash. It sure seems like a supportive community. They'd never survive the floods up here without a ton of volunteers. I've been here over ten years--guess I shouldn't feel like a transplant still. ;)

Serena--I would certainly think there would be an investigation about the fire alarms not working! I assume they had them? In Minnesota having them is the law. I am not sure about over here in North Dakota. Doubly amazing no one was hurt or killed! :)

Iggy--Wow! That was a huge fire!! We were lucky that apartment complex wasn't close to any other buildings. I do wonder how many pets died in the fire. I wonder if they will charge the person who was barbecuing on the balcony?

AliceKay--Because of the bystander who got the pictures, they know exactly where it started and who was responsible so I'd be surprised if they don't charge them with something. They usually don't allow charcoal barbecues and many complexes don't allow any kind at all. Here at mine--if they want to barbecue I have seen them do it down by their garage. Not allowed on the balconies. I bet a lot more places will not allow them on the balconies now. I'd hate to be that person who accidentally started this fire!!

I'm glad all the humans got out OK, and that all the pets did too!

Tori--I am not sure all the pets made it out of the fire, but all the humans and a lot of the pets did. Reporters don't seem as concerned about the pets as the people. :(

Hi Rita! What a fire and so close to you, too. I'm so glad I got you on the phone when I called and heard that you and Miss Karma were OK! That was just too close for comfort! I cannot believe their alarms didn't go off. Unfortunately I heard that some of the pets were unaccounted for...so sad. :( I hugged Emmy after I heard that.

There should be several lawsuits over this. For one thing, the outside of the building shouldn't have burned that quickly, so maybe they didn't use the proper materials to build it with. Also, no alarms. We have had some apartment fires here, but they are usually started inside the apartment by things like people falling asleep smoking or a stove not working right or an electrical fire.

Hopefully Fargo has code inspections on your apartment every so often. Makes you think how quickly everything can change.

I'm glad you and Karma are Ok where you are.

Jennifer--That was so sweet of you to call and make sure Karma and I were okay. You know I don't normally watch the news very often, but I haven't heard why the fire alarms didn't go off. If you hear why--email me, okay? So some of the pets did die. :( I figured that was likely, as quite a few people were just coming home from work apparently. Sad. Yup--hug Emmy!

Sue--All the buildings are inspected as they go up around here, so I'm sure they passed code. They're probably more expecting the fires to be from the inside, like you said. How often are they lit from the outside wall, you know? I did hear they are investigating the fire. I'm glad Karma and I are okay, yes!! :):)

That's usually how it works... Hey, reporters... Pets are people too!