Karma exhausted herself playing in the packing paper. 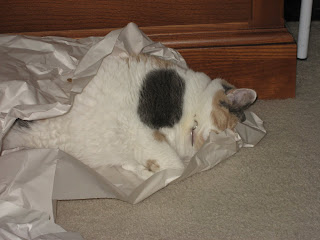 I ended up going over to Dagan and Leah's on Wednesday night instead of Tuesday. As usual, plans are in flux up here--and I am sometimes the last to know. ;)
****
Wednesday morning the roofers showed up over our heads. Karma heard them and a second after I took this picture she was long gone! 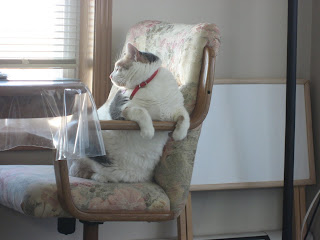 They did work above us all afternoon. No clue yet if they are done or my roof won't leak anymore--but there was an apparent confab of the roofers. They were all out there for some time--loudly discussing things--but it sounded like Spanish, so I have no clue what was going on. 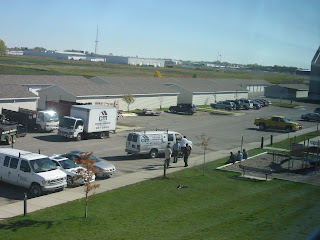 The crane was right at the end of the building by my apartment. Karma was sticking close to me because of the banging over our heads, so I felt guilty leaving her while they were still up there to go to Dagan and Leah's--but it didn't stop me--hehe! 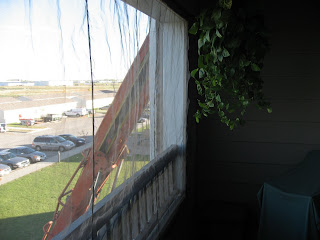 Sammy, the barfing cat, is doing fine. I've never mentioned it, but Sammy's always thrown up with unrelenting regularity ever since they got him. He is such a sweet cat, but that would drive me crazy! (And I think it is driving Dagan and Leah a little crazy, too.) They weren't told about Sammy's "delicate stomach" until they already had taken the cats home. :( 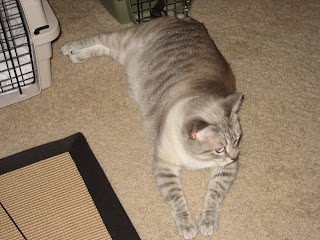 Annie was quite friendly to me that night. 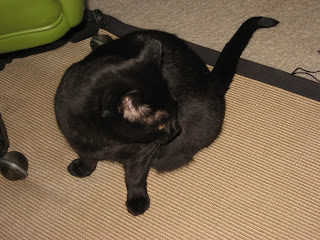 I had to take a shot of the dreadful looking three flavors of pickles eggs that they will sell at ValleyCon in a couple of weeks that have been fermenting over there for a couple of months. Yuck! Gag! No accounting for taste--they sell like crazy--hehe! 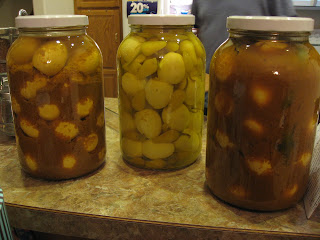 Leah showed me how to make guacamole with this can of Mexican diced tomatoes... 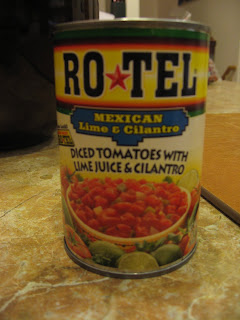 ...avocados, lime juice, and sour cream. I had never tried it until the week before at their place. Yummy! Really jazzed up my boca burger--hehe! 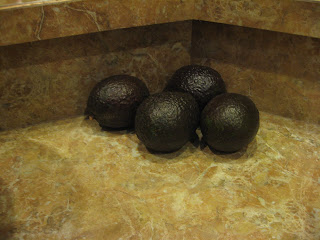 We weren't able to do much with etsy at all because Leah was busy baking for their weekend at the cabin down near St. Cloud. They go every year to the woods with friends and rough it--no electricity even. Leah baked a couple peach cobblers... 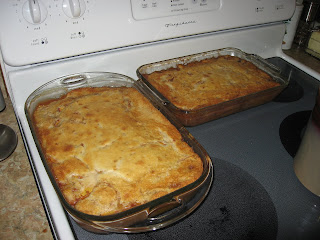 ...and was baking an apple cobbler when I left. 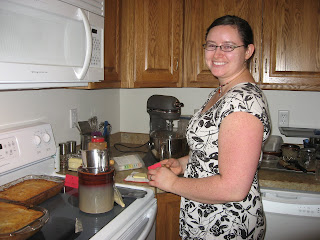 Dagan was busy playing a game with other people in cyberspace... 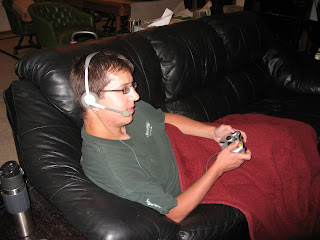 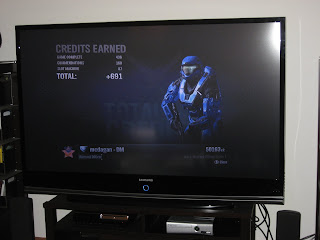 Leah and I did go upstairs and took a few pictures of the watercolor journal with some paints and brushes I had brought along to see how that would look for the shop. It's going to be difficult for us to get a lot done on the etsy shop until after ValleyCon, I think. I want Leah to take some pictures so I can show you their suite at the convention.
****
Anyways, when I got home that night I was giggling when I came around the corner of the garages and saw this! Somebody already has Christmas lights up on their balcony!! Awesome! I do so LOVE the holidays--it just lifted my spirits to see the colored lights. ;) 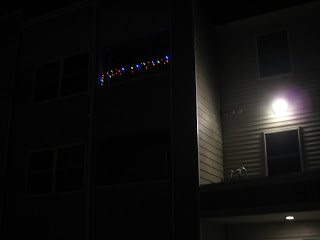 This has now become a new routine after I get home from Dagan and Leah's. I empty out the laptop bag and lay it out on the floor... 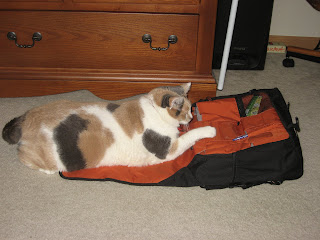 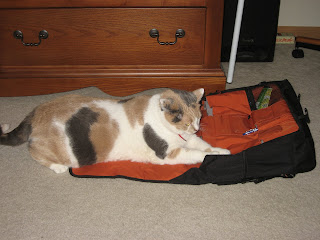 ...and attack the straps--but I have to watch she doesn't actually chew them off! 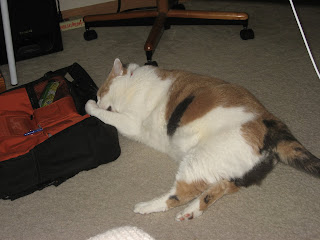 I have no clue as to why this bag is sooo fascinating any more than why Karma loves Leah's shoes--hehe! 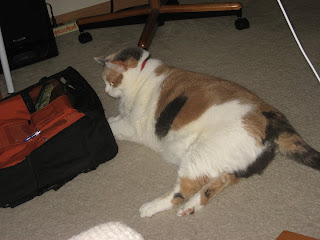 On Thursday the second package arrived. (One more left to show up.) We are now stockpiled on sets of B-plates for the Cuttlebug--tada! 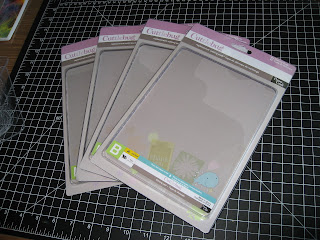 How gorgeous and clear the new ones are! 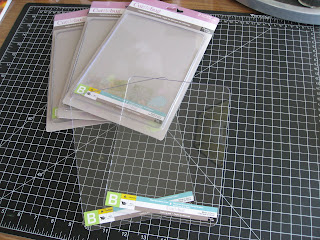 So now I can throw out the last pair we had. 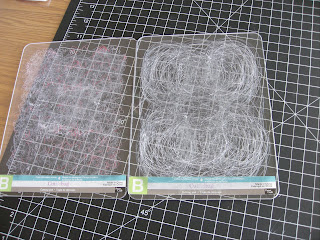 The one on the left (below) is the B-plate I just used for the 480 cuts made for the Christmas cards. Shot! The new one next to it on the right can hardly be seen. Pristine!! 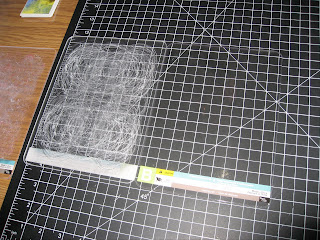 It won't remain that way for long--hehe!
****
You may have already guessed that my days and nights are flipped again lately. A pattern that doesn't remain that way for long, either. ;)
****
I've been writing letters, washing clothes, and that kind of thing. About due to get back to the Christmas card assembly line--hehe! Probably this weekend. Supposed to rain today, but then be sunny on Saturday and Sunday--and back down to the 50's and 60's. I think you are all caught up. I hope you don't mind the long blogs when I finally do blog. ;)
****
Hope everybody has a really great weekend!! :):)
****
I love this quote so much I had it on my email signature for a long time.
****
"To live is so startling it leaves little time for anything else."
Emily Dickinson
Posted by Rita at 2:02 AM

Karma didn't look happy that the roofers were back. I hope they get that project done soon so you and Karma can enjoy some peace and quiet.

Those pickled eggs look yucky to me. *shivers* The peach clobber, however, looked scrumptious. :)

Wow, Christmas lights already? Or was it decoration for an upcoming party? (lights are nice but don't rush Christmas for goodness sakes...lol)

I'm glad you received your new Cuttlebug plates. The other ones showed a lot of use.

We received about 4 1/4 inches of rain here yesterday and last night, but the creeks and river in our immediate area handled it okay. Further south wasn't as lucky. Today was a cloudy day until the sun broke thru the clouds late afternoon. It's chilly tonight and tomorrow is suppsed to be around 60. Fall is upon us.

Have a great weekend. (nice quote)

I hope that is it for the leaking now, and that the roofers get finished up soon.

Some of those things sound really tasty... Wouldn't mind some of that cobbler. Don't care which one!

Christmas lights already? I always loved them, but I think Halloween should be over with first. Once November comes... Fine. But before that is too early, I think.

I will pass on those pickled eggs too..but the peach cobbler sounds and looks yummy! You have been busy..Karma is sure entertaining!:)

Hubby loves pickled eggs. I will eat a slice and I am done. The peach cobbler,though. Yum! The roughing it sounds like fun. I think back to when our electricity was out for 4 days a few years ago and I'll have to say I enjoyed the slower pace.

You did some serious cutting on that board! A new one was definitely in order.

Have a wonderful weekend.

some thoughts - I used to make beet pickled eggs from leftover pickled beet juice. they are very pretty and taste good also. I use ro-tel tomatoes a lot. I used to have my sister mail them to me from OK, but they finally have them in the stores now. There's a very easy dip you make in the microwave of velveeta cheese and 1 can of ro tel tomatoes.

One of my cats used to throw up a lot - still does. Sometimes it's the type of dry cat food - I switched her and it's mostly stopped and sometimes they have a furball, so I give her that Petromalt stuff on the end of her paw and she will lick it off.

Also, being oa saver of all things, I would find another use for the acrylic plates myself. LOL

YUCK on the pickled eggs I could not imagine even trying one to those things LOL That first picture of Karma just made me laugh she is so funny and entertaining. I sure hope you are having a good weekend :o)

AliceKay--She was out of that chair like a shot and slinking across the floor, poor thing.
Me, too. Convulsing shivers!
Glad it isn't flooding where you are. Hope you have a good weekend--headache free!

Tori--I keep thinking they should be done above me and then they're back? One day...
Way too early for the lights. That's why they made me giggle. :)

FarSide--I'm sure the cobblers will be gobbled up over the weekend. They'll all work up an appetite roughing it out in the woods--outdoor privy and firewood for heat. I'm too old and appreciate the creature comforts these days--hehe! ;)

Deanna--I thought you either loved pickled eggs or hated them. You must be an anomaly--hehe!
In only one year we destroyed 2 sets of plates. Been busier than I think, I guess. ;) We'll start messing up a new one pretty soon, I'm sure. :)

Sue--pickled anything makes my stomach lurch. Those tomates were good in the guacamole! The dip sounds good.
Dagan and Leah tried several other foods--one at a time--and nothing has helped. And Sammy throws up the canned food as well and the dry. No furballs, either. A mystery.
I wondered about the plates for recycling, but they are so rough and gross...just decided to toss them. If you can think of anything let me know--we'll have more. ;)

Lynn--I can't even stand the smell of them--yuck! But some people love them.
Karma's the most unique cat I've ever lived with (can't really say owned). She's a hoot! :)

I know I likes cobblers... and I likes Karma!

And those cuttlebug sheets - wow.. you really mash the heck out of 'em!

Iggy--I couldn't get them close enough to my nose to take a bite--ROFL! I don't like anything pickled anyways. Dagan and Leah don't eat them, either--just sell them at the convention.

Me likes cobblers and Karma, too. ;)