Karma and I have been feeling pretty lazy. When my sleep gets short and off kilter...I get to feeling out of whack and then I don't feel very good so I don't get much accomplished. 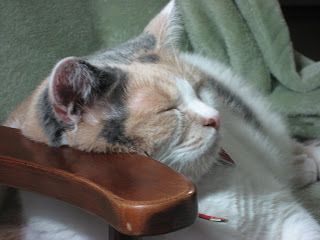 Leah took this picture of the roofers on her way home last Friday. 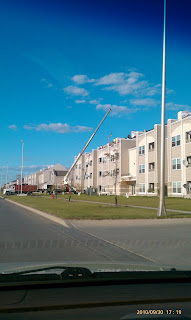 I haven't heard them working that much, despite the gorgeous fall days. They might be on the other side of my building (as in Leah's photo) or working on the other building, I suppose. They aren't done yet. I see stuff lying about on the roof still. Oh well.
****
I didn't get very far with the Christmas cards since I last wrote. Just got the Stamp-A-Ma-Jig set up for positioning the various stamps. 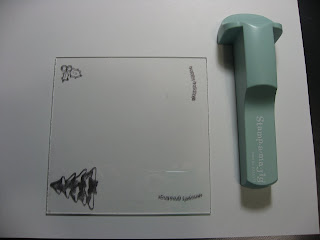 Spent time off and on at the table writing letters. Karma often sits at my feet...using the table leg as a pillow, of course. (She might have been a dog in her last life, eh?) 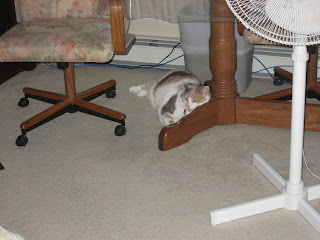 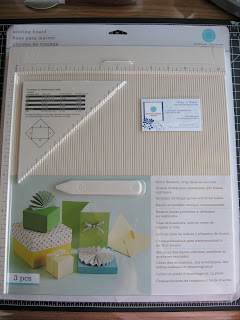 A Martha Stewart scoring board. 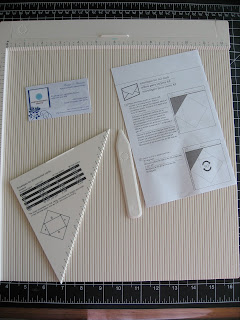 Half the price of the ScorPal and has notched grooves for the scoring tool so that you can put the paper right up to the top edge and the tool will still hit the top edge of the paper. And there's this nifty triangle (stores on the backside of the board) that you can slip into the corner so that it is a snap to score angles for envelopes, etc. Martha really did her research! 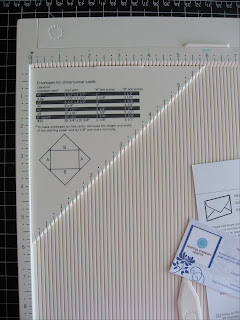 She has this little flap at the top to store the tool with a graph stuck to the underside that tells common measurements for making cards and envelopes. 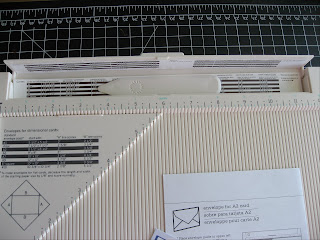 I realized that the extra graphs on the bottom of the slot were loose and in other languages, so I could remove them. 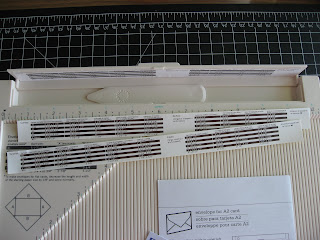 There was even this pretty faux business card for 10% off your next Martha Stewart order. 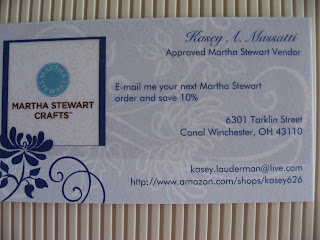 You know I am not feeling up to par when I haven't even played with it yet. Soon, I hope. ;)
****
Yesterday Karma was so tired from my lack of sleep that she disappeared. I assumed she was under the bed, but then noticed... 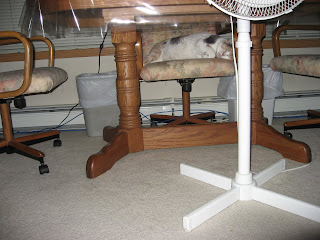 ...she had conked out up on the back chair way under the table--hehe! 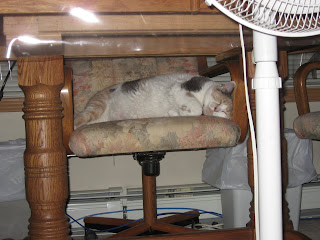 I've only been catching part of the perfect fall days--70's in the day and 50's at night--but they are glorious!! And supposed to continue for a few days--tada! :):)
****
Let's see--the live TV and the ability to record suddenly went out on me on Sunday. Dagan stopped by on Monday and fixed it--never saw him because I was sleeping crazy hours and didn't know he was here till I saw the post-it note on the TV when I woke up--ROFL! Think it was the new second tuner. Using a router again now--but we might have to run another cable around the room because I'm getting the glitchy pixelating off and on again since we added the second tuner. I wonder if living in an apartment complex with who knows how many routers being used nearby might not add to the problems we're having? Dagan and Leah haven't ever had any issues with their set-up? I'll have to see what Dagan says.
****
I didn't make it over to their place Tuesday night because I was so tired I was in bed by 8:30pm. But after a restless few hours and being up and down--I was up for good by 1:30am. See what I mean by being generally askew? Even when I am awake I am dragging around. This, too, shall pass. It always does. ;)
****
Made up a vat of veggie soup several days ago. I have been transforming it tonight. Started out a thin broth with veggies, but after eating that for a few days...now I added spaghetti noodles, crushed tomatoes, and some more spices. Almost as thick as a stew by now--hehe! I love cooking and baking in the fall--be doing more of it if I felt better.
****
Ahhh--the smell of the revised soup is calling me. My lunchtime--hehe!
****
Hope you're having great weather, too! :):)
****
Here's an interesting quote to mill on...
****
"I teach my sighs to lengthen into songs."
Theodore Roethke
Posted by Rita at 4:25 AM