Been sticky hot (heat index of 110), cloudy, and raining/storming off and on. Doesn't look like that is expected to change any time soon. The last two days have actually finally been too hot for Miss heat-lovin' Karma! She keeps asking to go out and doesn't last ten minutes out there. She thinks she should be able to lounge about all afternoon in the heat, but drags herself inside--fur hot to the touch.
****
God Bless whoever it was who invented air conditioning!!! They have a special place in heaven!
****
I was talking a little bit ago about Karma's fake cat treats (just dry diet cat food). This is where she eats them--on her Milk Bone bed--LOL! I put a few in an old plastic jar cover (and I switch the covers up as I get new ones) and some in the old tea tin... 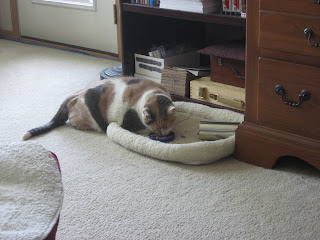 ...where she has to work harder to scoop them out of the back of the tin--as in this blurry action shot. 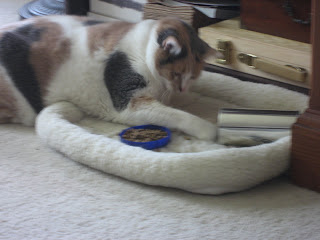 We were sure lazy all weekend.
(It was a pajama weekend, Serena!)
****
I did watch the Netflix movies I mentioned. Both of them were slow moving, character study type movies--and I loved them. (They would probably have driven Dagan and Leah nuts--hehe!)
****
The first one I watched was Of Gods and Men. French, subtitles, and based on a true story. (You can watch the trailer on the IMDB link.) I fell in love with the monks--especially the one who doctored the villagers. What a decision they had to make!
****
The other one was Another Year. (There's also a trailer for this one.) The main relationship that slowly shifted over the year was with the wife and a woman she worked with. It is so hard to care for someone who doesn't care about themself, you know? Anyways, I enjoyed both of them. But, if you're looking for action, you won't find much of it in these movies. ;)
****
I am bummed that Netlfix is raising their rates again in September. :( I may end up dropping down to one at a time and the instant movies. We'll see how it goes.
****
Well--I realized, for I think the third time now, that youtube stopped sending me emails for new video posts for my subscriptions. *sigh* It says I am not subscribed, and yet they are still listed under my subscriptions, and when I (rarely) get a youtube subscription update email several of them are still listed despite the fact I am supposedly not subscribed--but not all of them are there, either? (Arg!!) So, I went thru and re-subscibed to most of them again. Not sure I got them all. (Just like I'm not sure I got back all my blogs I followed after that Blogger glitch.) And why did I still get just certain youtube channels? Why didn't youtube unsubscribe me to all of mine? Who knows?
****
Been a lot of talk lately about technology and how it can be a love/hate relationship--LOL! True! True! I am grateful for it, with all it's glitches, I guess. :):)
****
Anyways, that was what I spent time doing...little by little...since Friday. Once I had re-subscribed--whew! I have been bombarded with emails filled with all the various videos. Some of which I already did get before and didn't renew? Seems like I have been getting all the videos from the last month or more. It should settle down here...I hope!
****
Meanwhile, a little experimentation still going on--hehe! I made up a couple of bookcards... 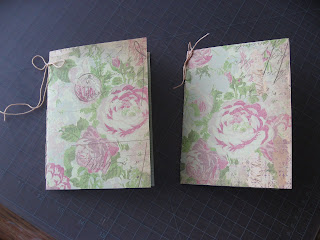 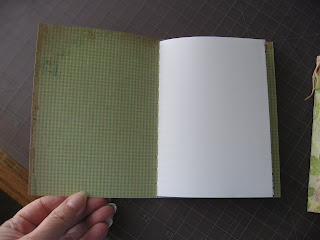 Have these earmarked already, of course. I have three bookcards going right now--several more ready to start letters--and only three of the sixteen I made that aren't earmarked...yet. LOL! No wonder I need to buy up a buttload of paper every 2-3 years. ;)
****
I am also reading some from these two books every day. Both fascinating and mind-stretching! 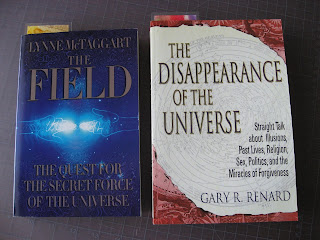 And I am also still reading and journaling my way through The Secret of The Shadow--writing in my personal journal--and trying to keep up online, too. My days slip by so quickly. But I am happy with what I am doing, so I can't complain.
****
And my days have actually slipped in time recently, too--LOL! Yup! Kind of working my way around the clock again. Oh well. I am busy. It is dark all day anyways. And beastly to venture out--even in the hallways here--arg! So, right now...it is back to the table for some more good ol' readin' and writin'. :):)
****
"Do you remember how electrical currents and 'unseen waves' were laughed at? The knowledge about man is still in its infancy."
Albert Einstein
Posted by Rita at 3:00 PM