Okay--technology hasn't exactly been my BFF lately--LOL!
****
First the laptop wouldn't recognize my wireless printer, you may recall. Well, last Wednesday it decided it didn't recognize the wireless internet, either. My backup laptop--well, Dagan took that with him to update last time they were here. My TV still had internet, so I knew it wasn't that the internet was down. My phone screen is so small...but--remember how I had forgotten all about about the TV being a computer last time the laptop had issues?
****
Well, with my poor vision, I decided to just grab a folding table and pull up a chair. Set myself up right smack in front of the big screen with my keyboard and mouse--and emailed Dagan and Leah on my TV. When I wasn't using the keyboard I just pulled the chair around next to the table to get it out of the way. Well, the change in furniture was immediately intriguing to you-know-who! 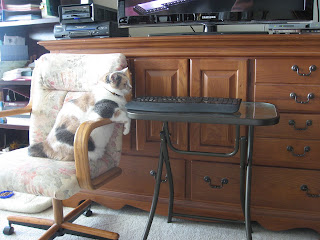 Karma claimed the chair as soon as I left it... 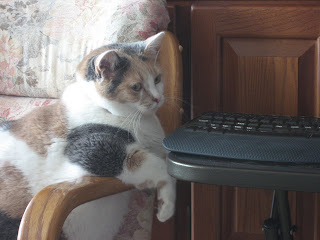 ...and she used the bottom of the table to rub and scratch her own head. Always thinking, she is. 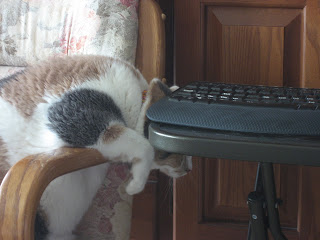 Now, the TV computer is Microsoft, a different system than I'm used to now, and not set up with all the tabs that I am used to (Leah sets them up for me). It doesn't even have the tool bar with edit and such...so I was at a loss how to do some things. So I just used it to read my gmail and answer emails. At least I kept up with something the last four days--LOL!
****
Dagan called me yesterday afternoon and talked me thru what to do. Had to shut down the laptop, disconnect the internet, and restart them. I figured it would be something pretty easy--just didn't know what to do. Since then, I have been catching up with youtube and blogger friends and my old yahoo mail account. Whew!
****
Meanwhile, the TV has also been acting up. Well, the TV computer and/or the TV. Been crashing itself, rebooting, and then the screen has moved on me. Crashed about four times I think in the last 10 days and the screen went goofy two different ways. The last time it crashed it went back to normal--knock on wood! Which was another reason I didn't do as much online on the TV.
****
So--there you have it. Why I have been gone for a little while. :) Not that I'm not gone for four days sometimes, but I usually keep up with comments on other blogs. Not really a big deal. I wasn't totally cut off from the outside world when I had email, right? :)
****
Other than that, it has been about the same around here. A bit cooler lately (80s) but, even when it is in the 60s or low 70s at night, been 75-90% humidity. So, I am still inside with the AC on. Seems a shame when the temps are so nice at night, but I am sore enough without the humidity added into the mix--LOL!
****
We've had a little sun here and there, but a lot of this! 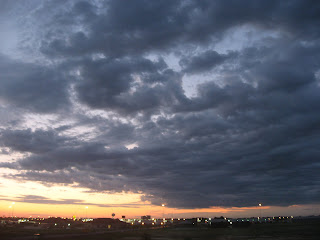 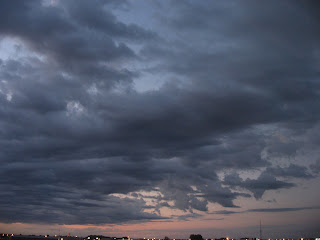 I watched Source Code and Winter in Wartime. Both of them were really good! Winter in Wartime is Dutch with subtitles, but was riveting. Worth "reading" this movie, in my opinion. I don't want to say too much about either of them. Wouldn't want to ruin anything. But I think they both have trailers you can watch.
****
Karma cracked me up! I suppose because she'd never been able to be that close to the big TV she became entranced with watching movies with me that first night. The one she is watching here was on instant Netflix. That's Keira Knightly in The Edge of Love--which was so boring to me that I quit watching it. Normally, if I can't be interested in half an hour (sometimes less) I don't want to waste my time and just try something else. Especially when it comes to the instant movies. 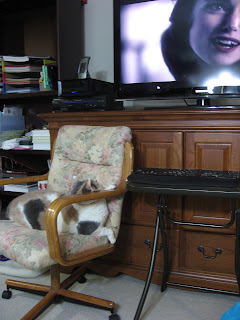 Sorry Keira. Karma was much more into the movie than I was. 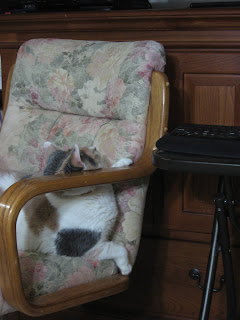 Meanwhile...the herbs have all made an appearance now! 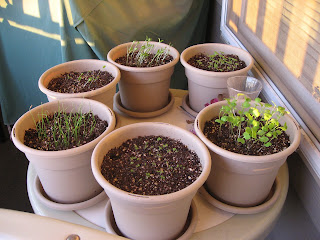 Including the catnip!! (Fingers crossed.) 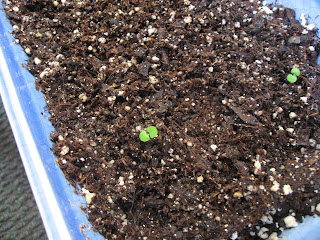 Yesterday was another grey day. A storm rolled thru in the morning and there was a crack of thunder so loud that sleeping Karma leapt up and ran across the room! Was right over our heads, I think. 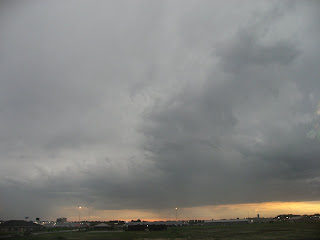 Today the sun has been out all morning. Yes, I have been back on days this weekend!! Tada! Nice! :):)
****
The latest weird thing they are doing in the building is unhooking the magnets on random fire doors. Even the ones that close off the elevator. The frustrating thing to me is that I am too dang short to reach way up there to hook those magnets back together to keep the door open again. Sometimes I do wish I was taller. Not often--but lately with the goofy door shenanigans a few more inches would be just the ticket. Not that I can't open them and get through--but I feel badly that I can't fix it for the next person, you know? At least they have not done much at all to the metal sheeting on the elevator door, though...knock on wood. Maybe soaking the elevator floor and the fire doors are enough entertainment for now--ROFL! ;)
****
Anyways, I am back online. [Knock on wood! Have really become quite superstitious about making statements like that lately--LOL!] Let's just say...hope to be back soon. ;)
****
"A friend is one to whom one may pour out all the contents of one's heart, chaff and grain together, knowing that the gentlest of hands will take and sift it, keep what is worth keeping and with a breath of kindness blow the rest away."
Arabian Proverb
Posted by Rita at 11:15 AM