I popped all the air bags with my box cutter and lined the Amazon box with them for Karma to snooze in yesterday. 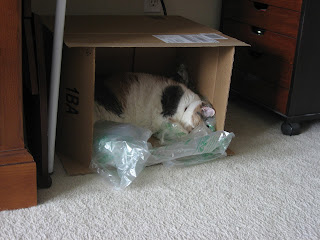 Dagan came over right after work.  We ate dinner and then we moved the art table into the hallway.  Dagan had all the drawers out of the dresser when Leah showed up after her chiropractor appointment.  Turned out they cancelled the meeting at work, so she was there the rest of the evening, too.  She ate and then the long and laborious job of sorting through all the cords and wires and cables began.
****
They looked through my "junk drawer" box that I keep in the coat closet... 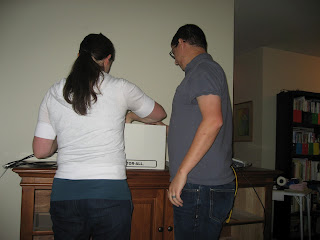 ...to see what I may have had that they could use in the process. 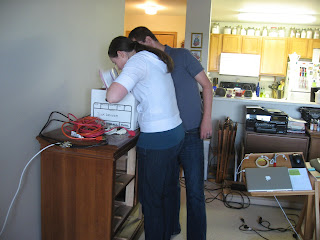 I didn't get many pictures because it was so crowded in this room that one could barely walk between the dresser drawers, TV, assorted equipment, boxes, and wires in the living room and the art table in the hallway...well, you can see the mess. 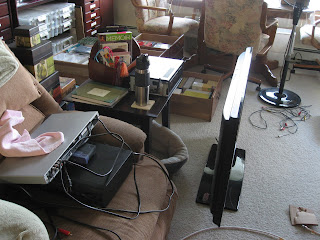 Oh, as if she had ESP, the second the blockade was removed that kept Karma from trying to get behind the dresser...she was over there in a flash!  And she was actually trying to fight Dagan and I to get her chance to investigate the forbidden territory--hissing and spitting!  I had to shut her in the bedroom, naughty girl.
****
I had to block the dresser off when we moved it into the living room 4-5 years ago to support Dagan and Leah's old humungous TV that they gave me.  Karma kept trying to go behind and underneath the dresser like she did when she was a kitten.  But since she was three times the size she had a heck of a time crawling about under there, couldn't figure out how to get back out, and she'd cry and carry on for the whole hour or so it took her to figure out her eventual escape.  But then, in a day or two, she'd do it again!!  Duh!  Whether it is just cat curiosity or a childhood memory she simply cannot resist...I had to block her entrance with a big folding wooden portable desk.  And last night she was willing to put up a fight to get back there!
****
When the dresser got moved over far enough...we could get it past the heat register...and up against the wall.  We all chuckled at foiling any future plans Miss Karma may have had to get stuck under that dresser ever again--tada!  Another added plus to switching the furniture around--ROFL!  And you can see Karma was dismayed when she was let out of the bedroom after Dagan and Leah left.  She immediately checked out both ends of the dresser. 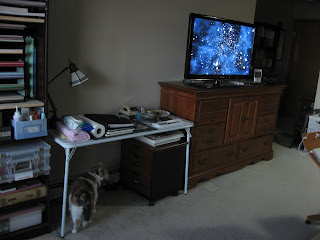 Another plus---the end of the heat register is now accessible.  It only goes part way along that wall and the actual thermostat is on the end of this particular register.  So, if anything goes wrong, we had to move that triple dresser for the maintenance man to get to it!  And the dresser blocked the air flow so that the thermostat on the wall always read warmer or cooler than it actually was in here.
****
I'll be able to hang the shelves a good 8-10 inches lower on the wall there over the folding art table.  Much easier for me to reach stuff. 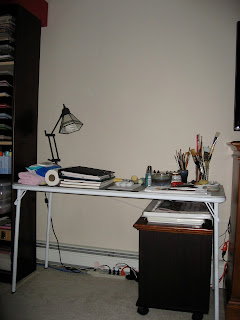 The bookcase won't block the light half as much as the triple dresser did.  Even this morning when it is very dark and foggy I have more light there than I used to in its old spot. 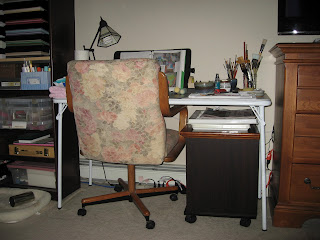 Sorting out all the mass of wires, cords, and cables...switching power strips...re-hooking and rearranging everything on the dresser...dusting a few places that hadn't seen the light of day since the dresser arrived in that spot 4-5 years ago...blowing out the computer box...getting everything working and communicating again...well, all of it was a huge project that took all evening.  But phase one was finished without any additional purchases.  :):)
****
Phase two (putting together the shelf unit) is planned for Sunday afternoon.  Hopefully we can also get to phase three (the mounting of the shelf unit on the wall), too.  We'll see how it goes on Sunday.  ;)
****
I have some new pics of the progress on Dagan and Leah's house, but I think this is enough for today.  I'll post them soon.
****
We're still predicted to be in the 90s through the weekend with a chance of rain or thunderstorms every day.  Hot and sticky prevails.  Wherever you are, stay comfortable and dry.  :)
****
"Your heart is full of fertile seeds, waiting to sprout."
Morihei Ueshiba
Posted by Rita at 9:08 AM