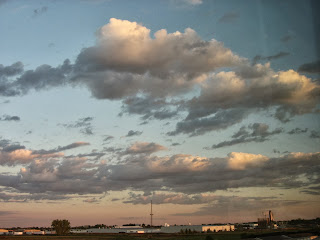 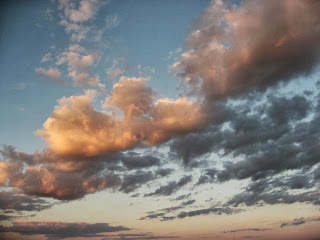 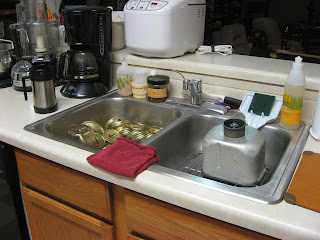 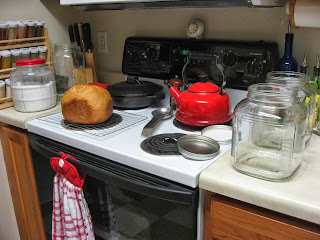 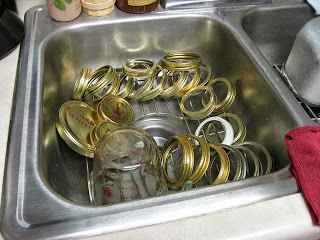 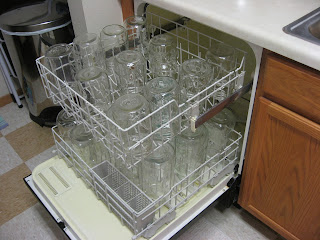 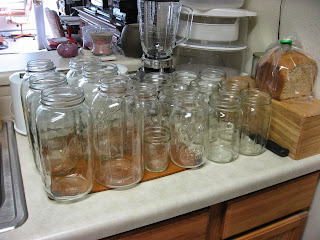 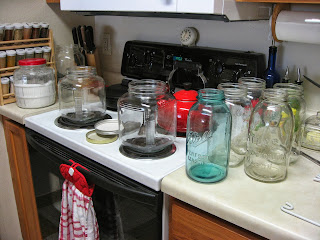 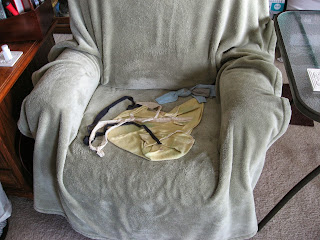 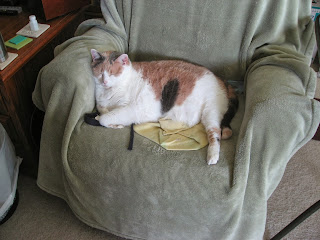 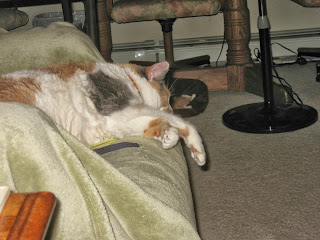 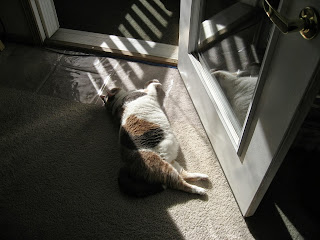 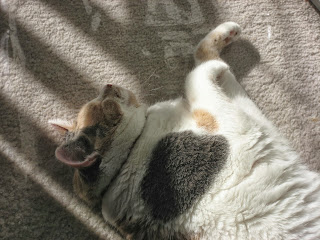 That's a lot of sparkling glass! You are slowly but surely "getting it done"! :) I don't clean half as much as you - I'm ashamed to say.

Karma is a goofball. :) That's why we all enjoy her!

what a finicky mess that karma is!

Besides the delicious looking honey bread, the first thing that caught my eye was that awesome red tea kettle! That's quite a collection of jars; they do make a kitchen look nice.

I hate cleaning cupboards. You have enough jars to make some jelly or do some canning.

Karma is a very particular lady.

Isn't it amazing to think about the things we used to do? I hauled around all those heavy people in the nursing home. Lifted them by myself! I can barely lift myself now.

That's huge job! Karma is such a goof.:)

You are inspiring me to clean my jars now. They look so shiny and clean.
Have a great week.

Dear Rita, I so like that final quotation by N. D. Walsch. Thank you for it. I'm trying as hard as I can to make my novel the best it can be. With its new first chapter I'm feeling more confident when I send out a sample with a query letter.

I applaud your decision to do one room in October. Of course, the kitchen is a big room to start with. Big in the sense of having so much "stuff" in it. That's the way with all kitchens. For myself, I'd say 2 months at a minimum! Peace.

None of us are as young as we used to be. Goes without saying that it goes... without even saying goodbye! :-)

Today before I could stop by, my computer hung up. When I got back online, I couldn’t get any page to load, not even my blog. So, I shut down, and made a late lunch. Then my kitchen sink plugged up. Still working on it, but needed to resume visiting my T friends. Sorry I'm late getting here.

That's a big, big chore, but I agree that those glass jars need to be in your pantry away from grease. I've got the same problem, but mine is partly because I have both a top and bottom oven.

Love that Karma takes to the sunshine, but am stumped by her attitude about the chair. It makes for a great story, though.

WOW that is a big job to take on, they look so clean and pretty though. Your cat is sooo funny, love that story. My cat does the same thing in the sun too. It was a beautiful perfect day here also. Happy T DAY!

I have to wash everything in my open cupboards too..they get dusty...and a bug or two might be in a cup or a bowl in the back..or one of those horrid Asian Beetles that have arrived:(

Tearing the kitchen apart, cleaning everything, and putting it back together again is a pain in the patootie job to do, but it sure does feel good after you've gotten it done, doesn't it? (Silly me, I used to think keeping stuff in a china cabinet would keep it clean... HA!)

It's amazing how much kitchen grease gets about when it comes to jars and other things on open shelves (I love the look of open shelf displays but they sure do have their down-side. Thankfully, I don't have many open shelves in my kitchen). You must be so pleased to get these all cleaned up....quite a job! I like that blue jar. :)

I so need to catch up with your blog yet again. Goodness, I don't know where the days go of late.

You always post such beautiful sky shots. Looks like you have accomplished a lot in your kitchen even if you have to do it 10 minutes at a time.

Laughed at Karma and the chair. She certainly lets you know what she wants.

Karma looks completely stressed out. I think you should do something to calm her down. :)

Beautiful clouds and love the color created by the setting sun! looks like you've really worked hard on the glass jars...I love glass too. but they sure do accumulate dust quickly! So glad you invited us in to share your project...

Happy T day eventho it's Thursday!
Had keyboard issues that were driving me up a wall...all fixed now.
Gorgeous photos you took
and
I had no idea what a healthy size your Karma kitty is :)
What a project you undertook with the jars.
I keep reminding myself everything changes ... have to keep repeating it until I 'get' it I guess.
Take care and see you soon as you are right about T Tuesdays coming around quick!
oxo