Been gone for a few weeks from WOYWW, too.  What's on my workdesk?  Well, my art table has been quietly waiting for me to return.  Not much happening there. 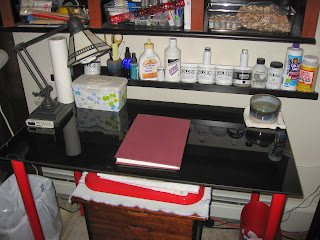 My craft table...well, it does double-duty every morning when I journal...and I have another letter to respond to waiting for me this morning, too.  I often bring the McLap over (on the wire stand) and either watch some craft videos or listen to Pandora while I am writing. 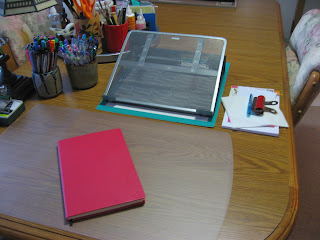 Oh, I promised you a silly Karma story.
(Kind of silly on my part, too--LOL!)
****
Okay, remember Miss Karma didn't like the new baby lift chair even with the throw on it and wouldn't sit up there unless I had that yellow rag and some of her toys up there?  Well, since she had been going for the big blue treat ball every morning instead of the bowl on her brown mat (loves the new Halo cat food I was putting in her blue ball)...and I had already removed the extra water dish weeks ago...I decided to remove the food dish, too.  She really doesn't need a food station in two places all winter and three in the summer (pantry and the porch).  The big blue treat ball is quite enough.  All of them have regular cat food in them but she thinks the living room food is her "special treats" because I put very little in there of different foods than she gets in her regular bowl and I kept it in small jars in the end table.  I know.  Silly.  But Karma was fooled into thinking diet cat food was something quite special.  (All her food is diet, believe it or not--except for the canned food.)
****
Long story...but I removed the "treat" bowl, washed the fluffy brown mat, and put it up on the chair.  Now she loves the chair. 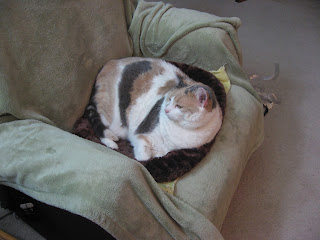 She's up there all the time now--LOL! 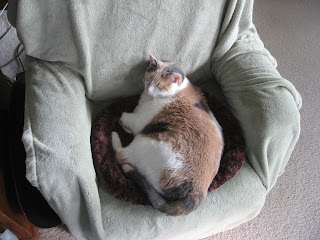 It is a very small chair.  Her regular cat beds don't even fit on it without hanging partway off and even my feet hang totally over the end...at my ankles!  And I'm only a little over 5'1"!  That's why I call it the baby chair--LOL!
****
Well, it's 36 degrees and just as dark as yesterday.  Dagan and Leah aren't coming over, I guess.  They are carving pumpkins tonight.  :)  Halloween tomorrow!
****
Amour was such a sad movie.  But realistically done and the acting was magnificent.  I believe the actress had been up for an oscar.  She should have gotten it!  Wow!  (Not that I saw all the performances, mind you.)  Makes you wonder what you would do under those circumstances in your 80s...what it would be like to be in either position.  I've been lucky with my movie choices lately and haven't picked a stinker for quite a while.  ;)
****
Have a scintillating Wednesday!  :)
Karma says hi!
****
"Look at your feet.  You are standing in the sky.  When we think of the sky, we tend to look up, but the sky actually begins at the earth."
Diane Ackerman
Posted by Rita at 9:50 AM