And it's T Stands For Tuesday already again over at Elizabeth's and I never even made it around from last week!  With all my good intentions...no...I did not get caught up online this weekend.  :(  It's a beautiful morning again, though. 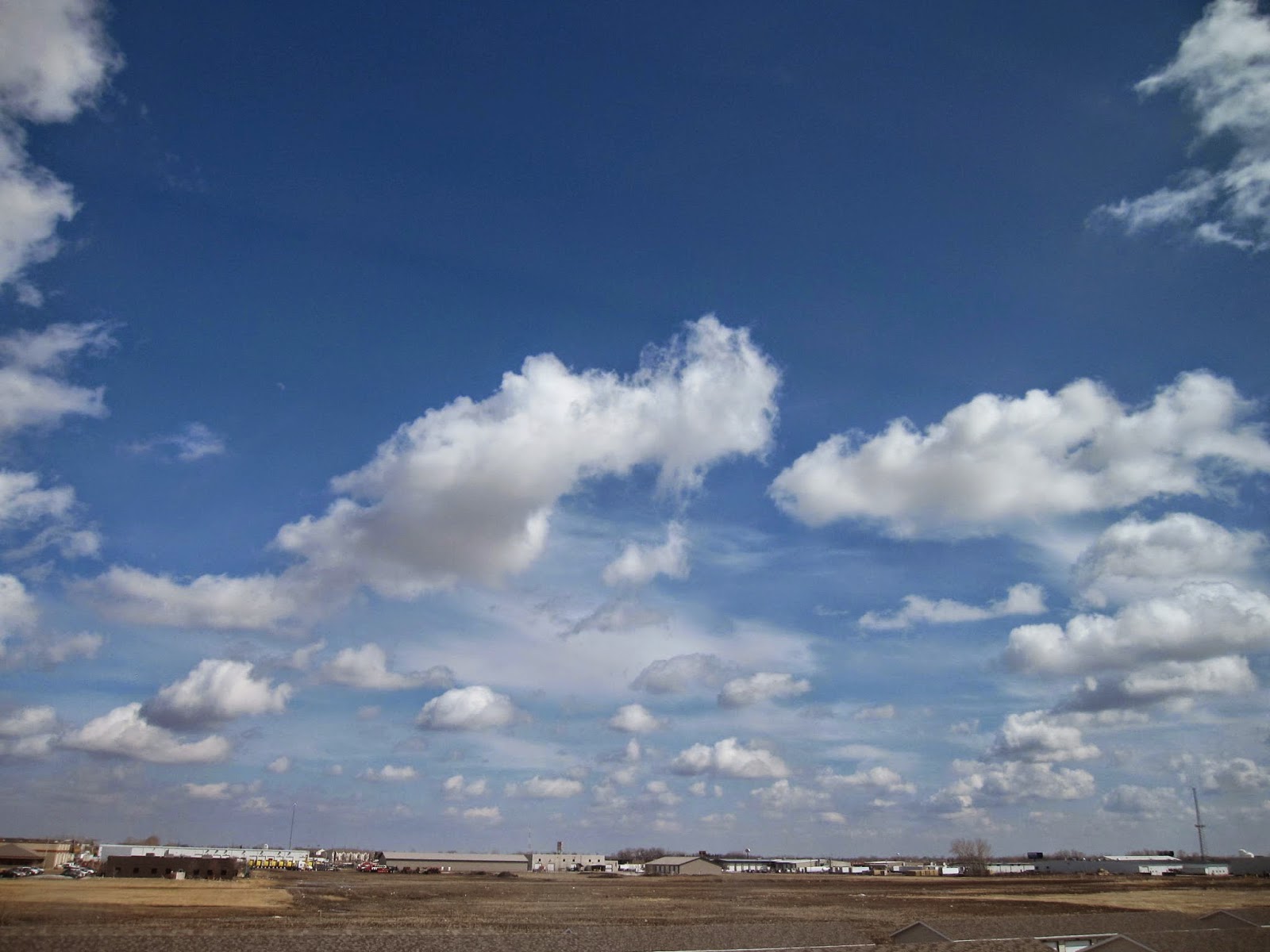 We've hit the 50s the past few days--supposed to get there today, too.  See this picture below of Karma keeping me company while I wrote a letter?  See the snow outside the window?  That was just on Friday, I believe. 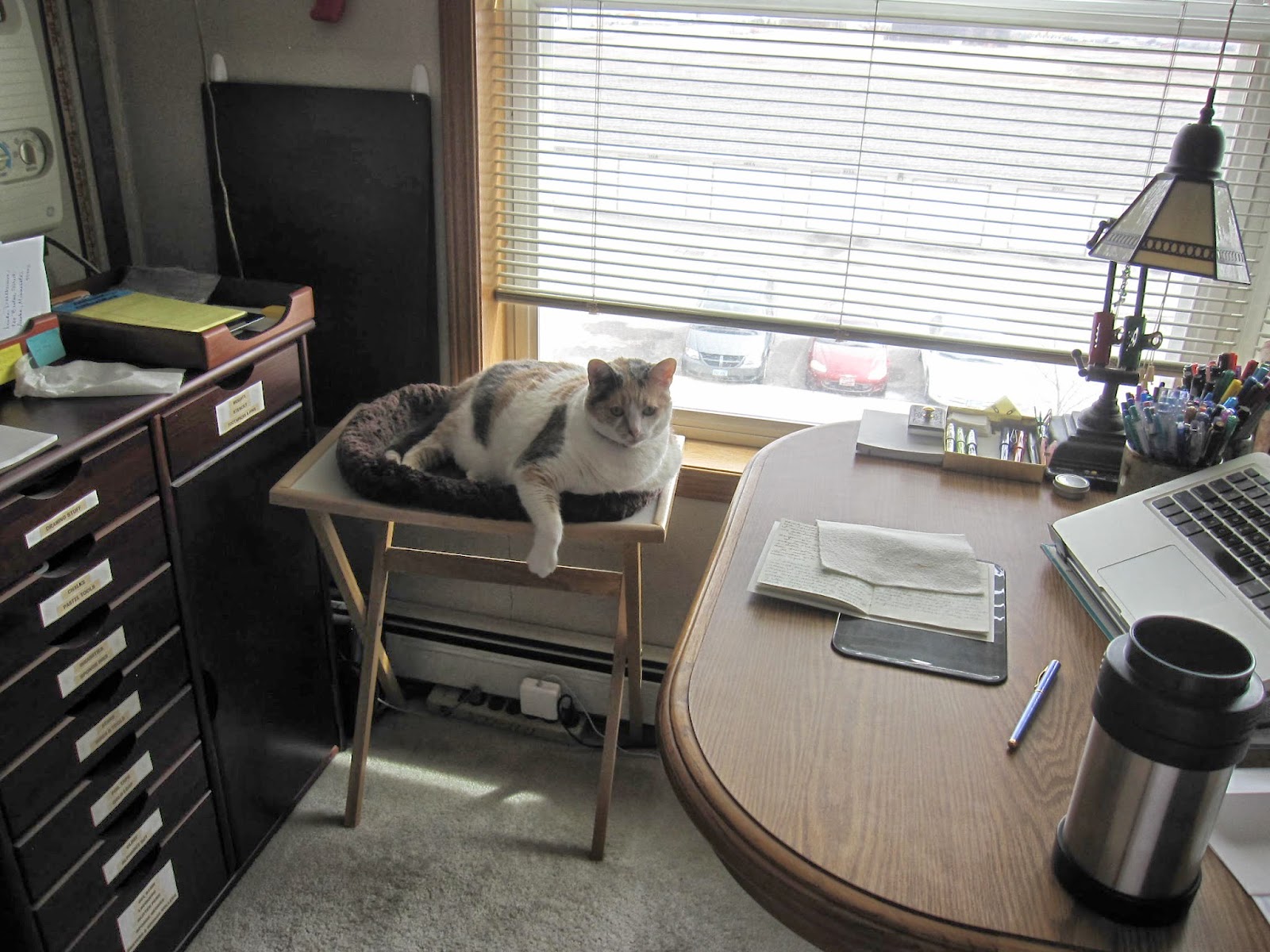 I've been catching up on correspondence and thank yous.  Have written 15 notes and letters in the last four days...and still have five more to go.  There was a birthday influx.  I usually don't have this many lined up at a time--LOL!  So very sweet, though. 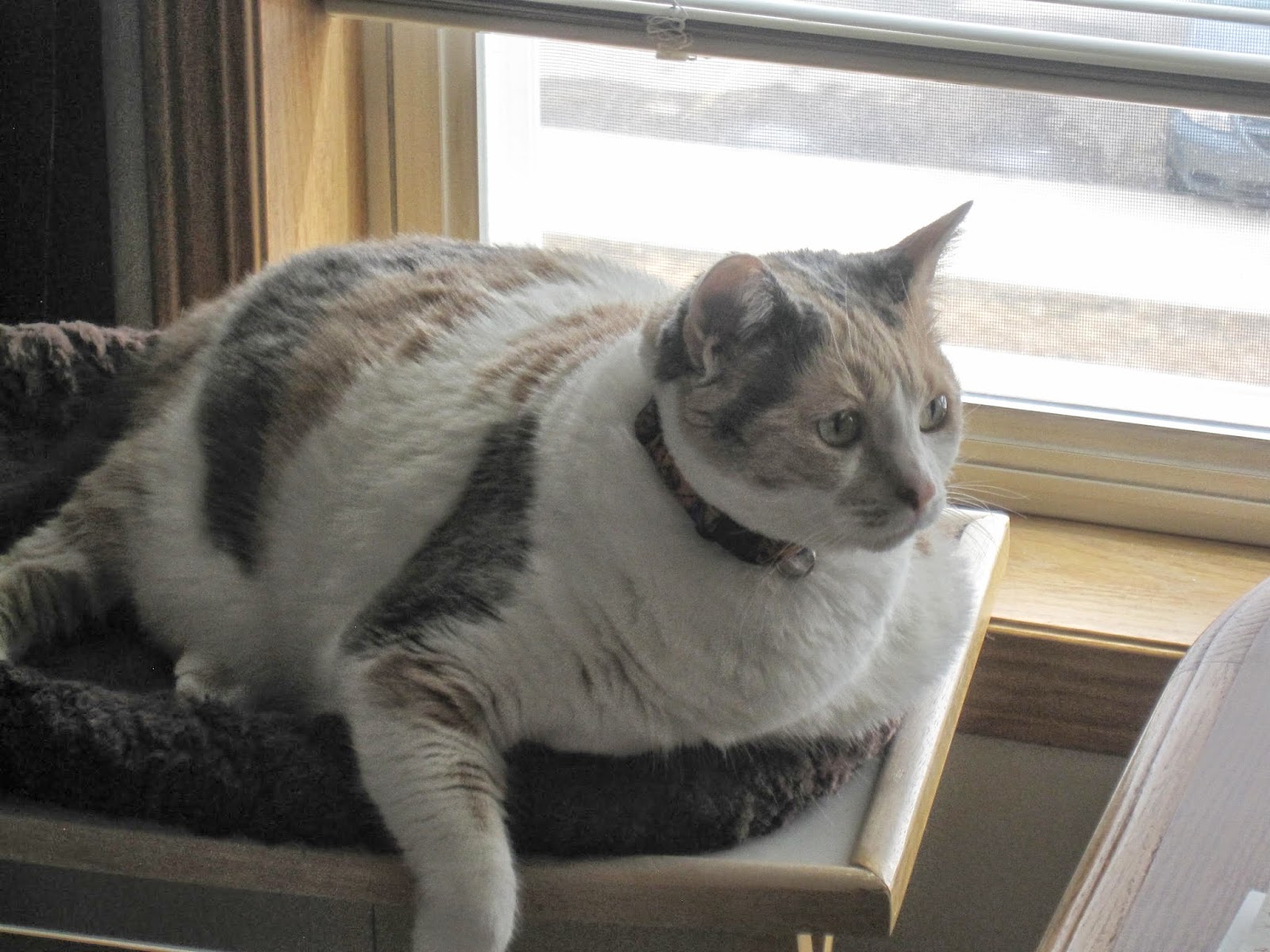 And I do journal every morning...with my trusty thermos of coffee. 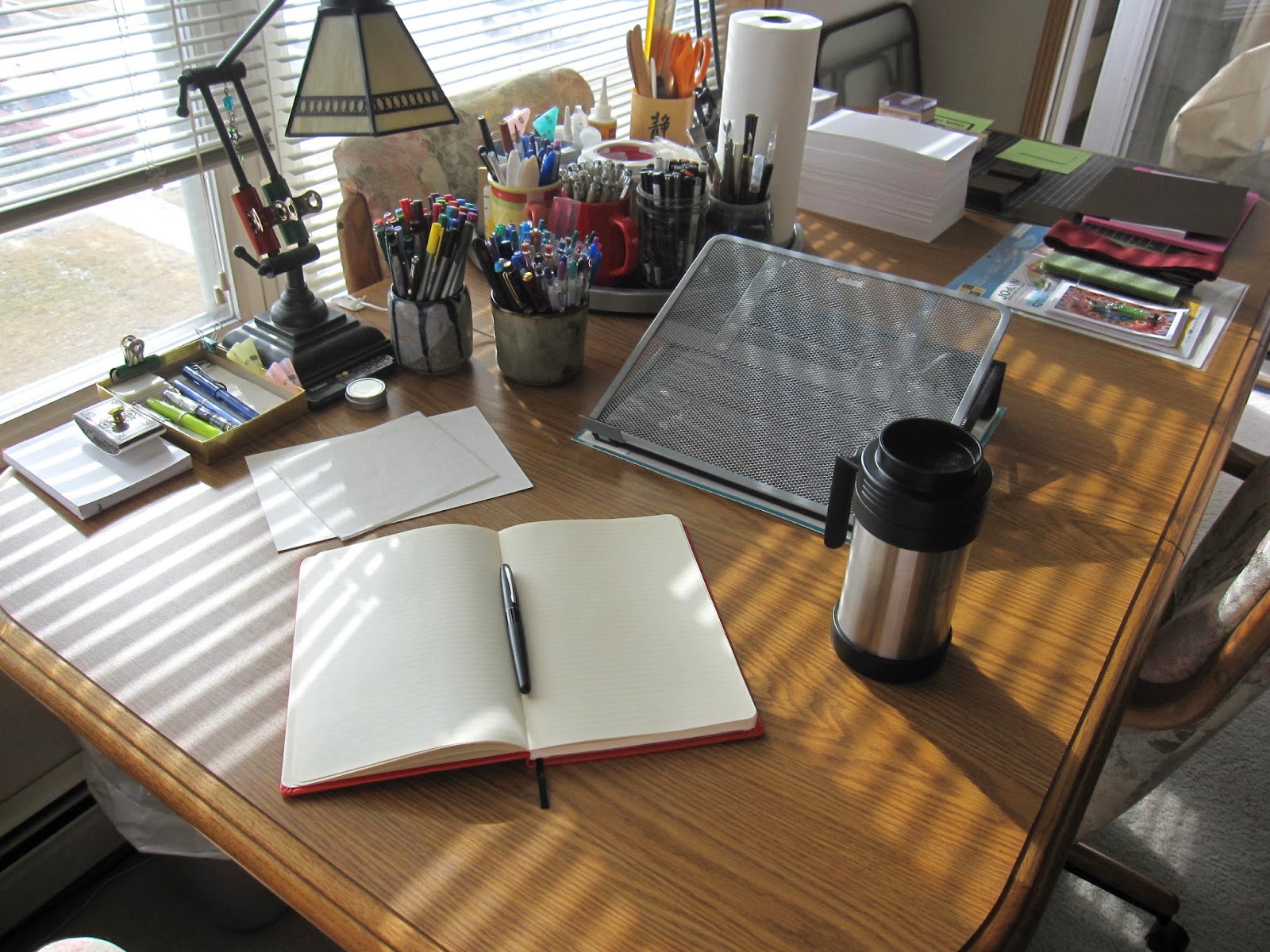 I have till June to wean myself off of the coffee.  That's the cut off date I gave myself, as you know.  If I can do it sooner--fine.  Makes me sad to look at my mug now, though.  And I sip so slowly I have to reheat the coffee a couple times because I find I am trying to make it last all day--LOL!  I have managed to stretch out my one mug till almost dinnertime--ROFL!
****
The box of the six-month's worth of supplements arrived yesterday.  I haven't even sorted through them yet.  I am still moving at a snail's pace with this cold hanging on by it's fingernails. 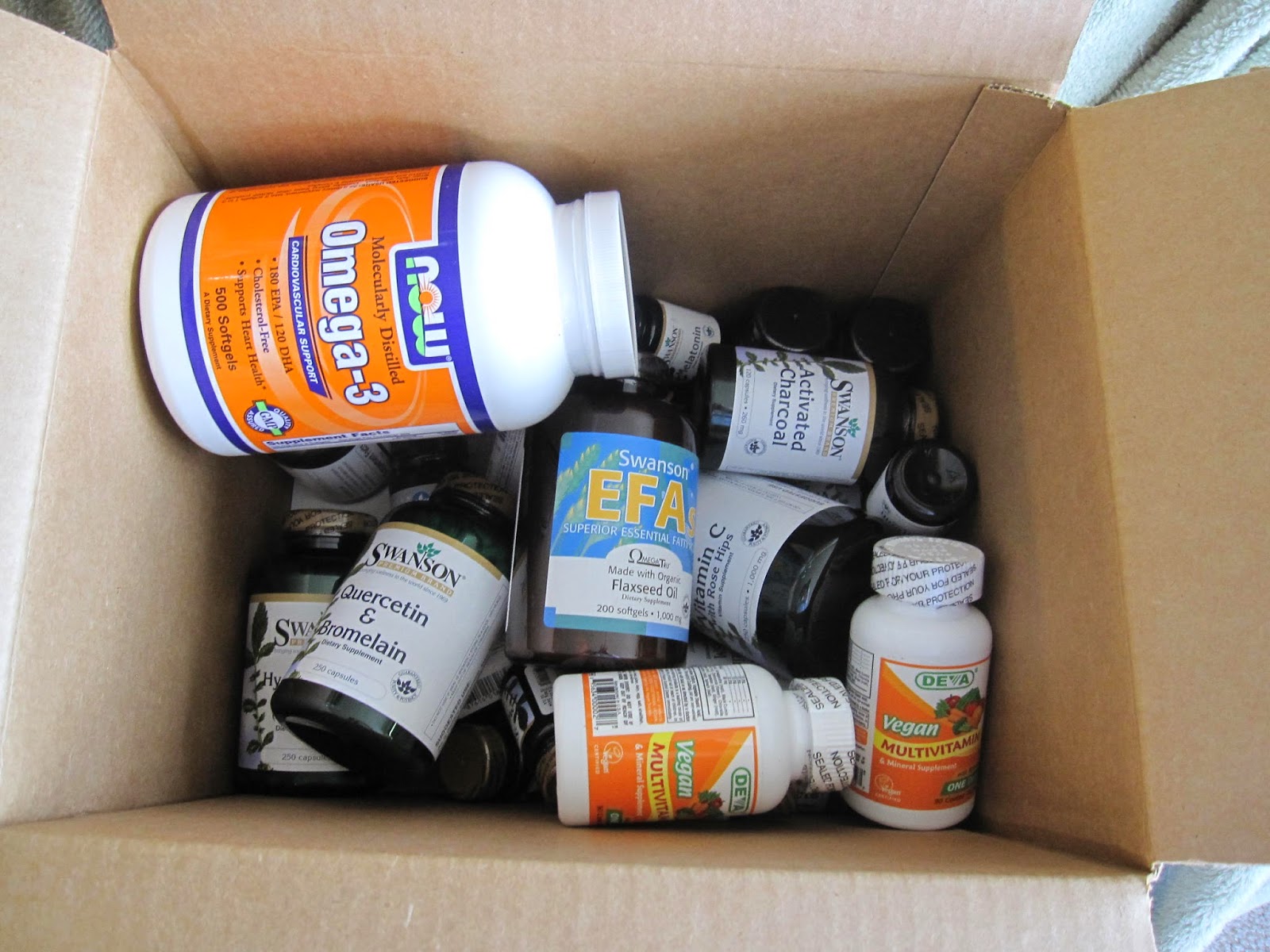 I won a set of stencils from Christy Sobolewski on youtube and they arrived yesterday! 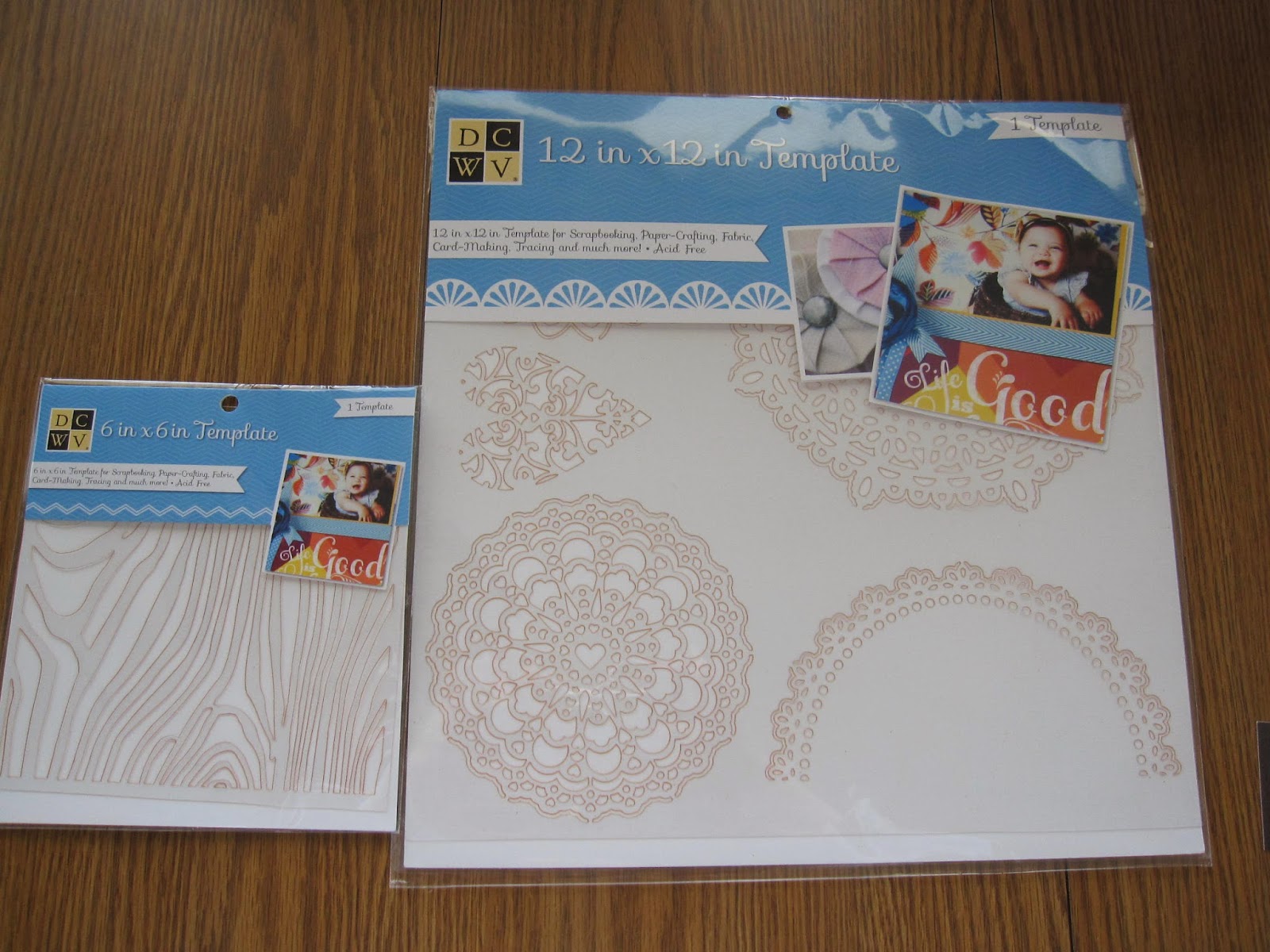 She received some complete sets to give away from the company and instead of giving away the whole sets she split them up so there would be a whole slew of winners!  How sweet of her to do that because it took a lot more time and effort--not to mention shipping costs.  You didn't know which ones you were going to get--just a larger one and a smaller one.  I was one of the lucky winners!!  :)
****
Oh, and I was going to show you!  The tiny egg cup candles are too small for a tea light. 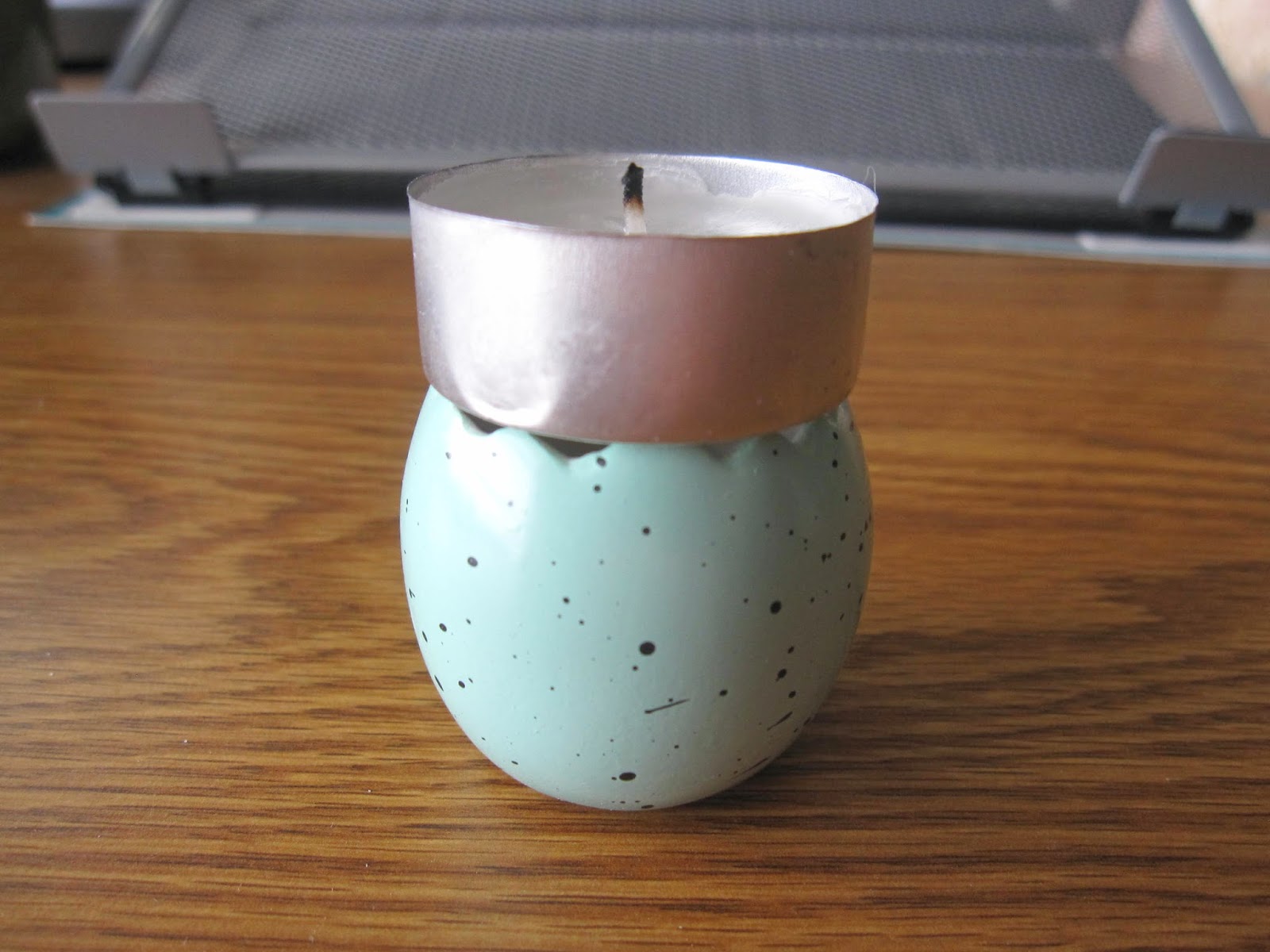 I'll clean them up and see if I can think of how to use them.  Just too cute!  I hate to say this, but what just went through my mind is that bumpy rim would make an odd, clumpy, dotted circle on some mixed media...the paint would wash off...humm...?  I may have to at least try that for the heck of it.  ;)
****
I had ordered a set of metallic acrylic inks on Amazon and the company cancelled the order because they were out of stock.  Odd.  They usually tell you they'll send it when it comes in.  Was one of those satellite companies who sell through Amazon.  Anyways, I guess I was supposed to use that money on healthy stuff--LOL!  Now I will have a little extra when I go with Leah to Tochi's on Thursday.  ;)
****
It has been gorgeous here for the past three days!  In the low 50s (low teens in C) for highs and the snow piles and banks are melting fast.  We've even had some light rain and there was a first thunderstorm of the season one evening!  It even cleaned off the windows enough that I could take that first shot through the glass again.
****
Karma's been in seventh heaven! 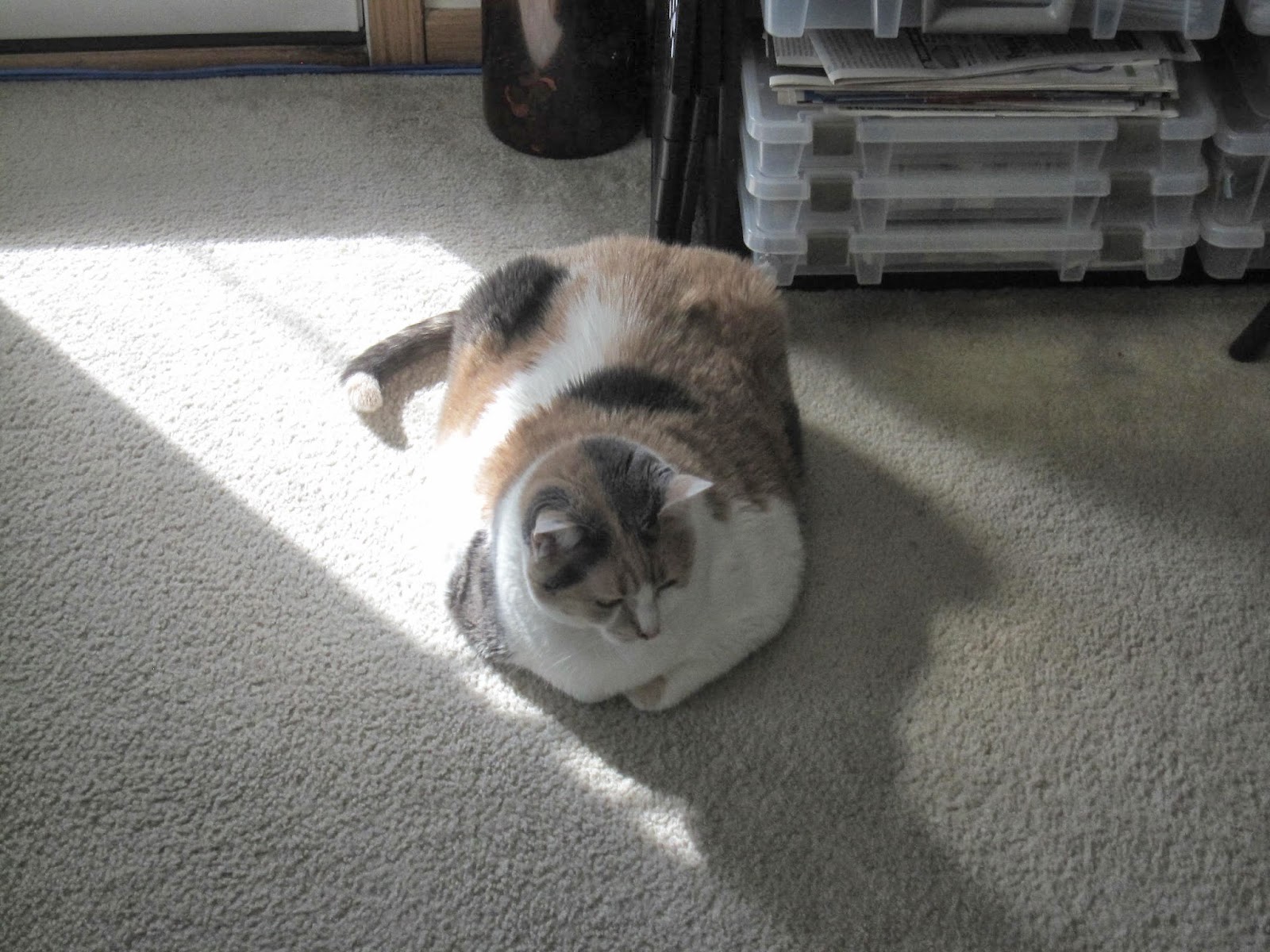 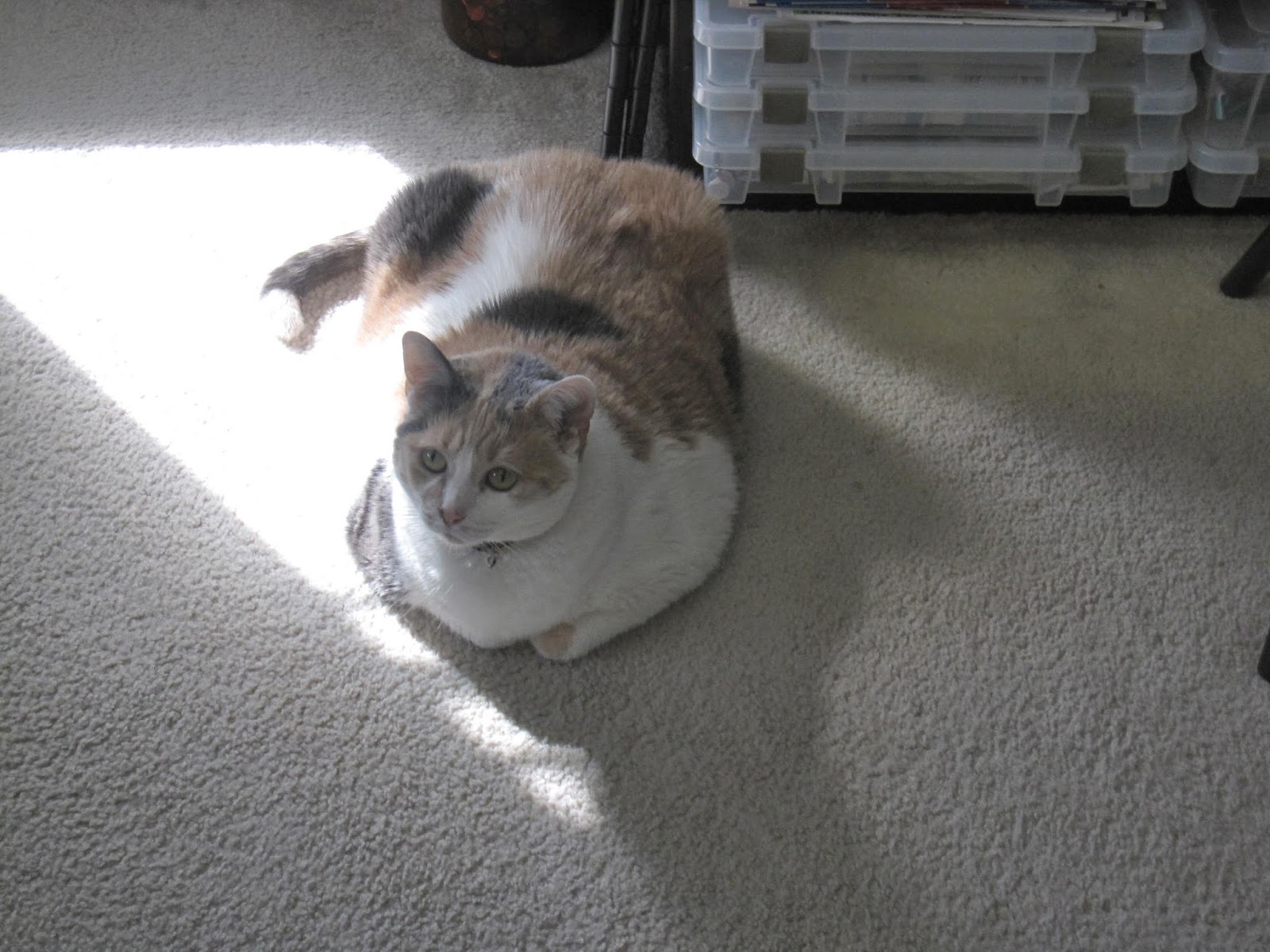 She's been spending time on the porch until the sun beams are gone, too.  Still chilly to sit outside.  I did go out and read a short while yesterday.  But the rumor is that it is supposed to be in the 70s tomorrow!!  (20s celsius!)  There will definitely have to be some porch time tomorrow!
****
Dagan and Leah are coming over tomorrow night.  Leah and I will be working on cards.  I'll try to remember to get some pictures.  I'm just terrible for remembering when I have company or go places, aren't I?  I wonder if I will improve when McBaby arrives as an enticing new camera subject, eh?  ;)  LOL!
****
Well, now I am hoping to catch up a little online this week.  But for right now...my coffee, Puffs, and I are heading back to continue my paper conversations.  Just an old-fashioned girl in love with pens and inks and the quiet, intimate, contemplative (sometimes silly and shallow) conversations letters afford.  ;)
****
Have a special day!
Catch some rays if you can.  :) :)
****
"The true harvest of my daily life is somewhat as intangible and indescribable as the tints of morning or evening. It is a little star-dust caught, a segment of the rainbow which I have clutched."
Henry David Thoreau
Posted by Rita at 12:16 PM