Best laid plans, eh?
No getting together Tuesday and Wednesday with Dagan and Leah. We had a winter storm watch and terrible winds. Blizzards to the west of us, semi-trucks toppled off the freeway, power lines down, and nasty freezing rain. I rescued the philodendron from the porch before the cold rain hit. 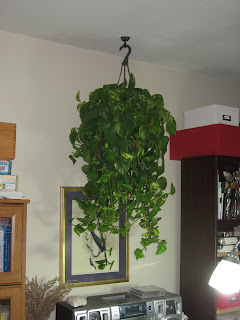 I never saw any snow. I was up late and slept in, but never saw any white on the ground here. The winds, tho--whew! Pounded and whistled and screamed.
****
Monday night the maintenance man came beating on the doors on third floor asking about leaking. [All those prayers were answered, folks! Still no leaks here.] I guess there were a lot of new leaks and they had water "pouring in" a lot of the apartments up here on third floor. A lady opened the door across the hall from me and she had leaking. Those poor people have just slowly been moving in this month. I felt so protected and fortunate. Kind of makes you feel guilty when your fortunes have changed for the better when others have changed for the worse. But not enough that I wanted water pouring down from my ceiling light again--ROFL!
****
Warm and dry, I colored in the holly and berries while I watched Supernatural. 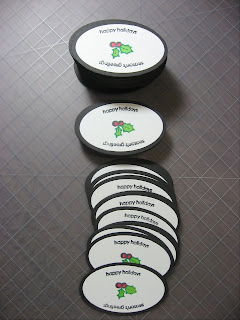 Had to turn up the volume to hear it over the wind. 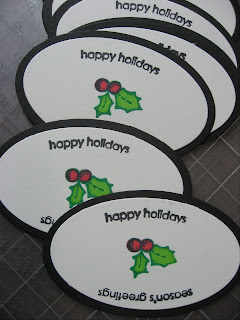 Tuesday. Was still raining and I took these shots. You could hear the plastic being whipped and snapped about up there on the roof. 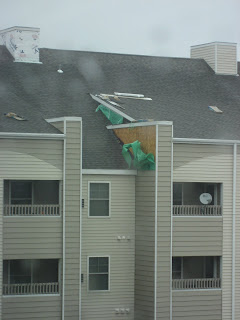 The wind had ripped the plastic sheeting off these areas where they had removed the siding. No wonder there was leaking. Down to the bare wood. Must have finished right above me? Sunny today, but the plastic is still just hanging there in strips--haven't seen any roofers, but they might be somewhere I can't see them...or hear them? Nothing has changed from my viewpoint up here. Even the ladder is still there on the grass. 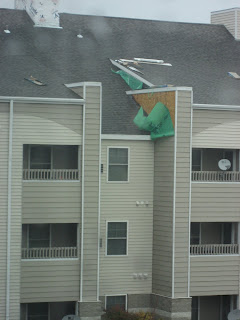 I am just extra grateful that I haven't had any leaking this time. :)
****
Been working away on the oval parts with the holly. I did half of them at a time. 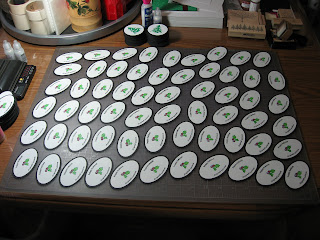 First I glazed one berry (left side) on each one... 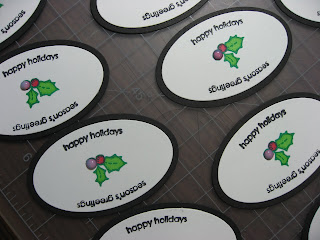 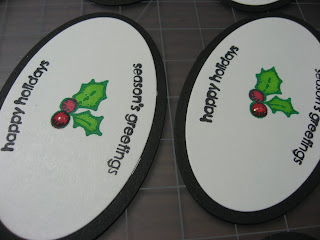 ...and then glazed the other berry... 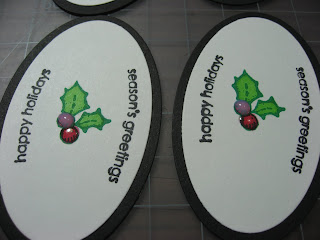 ...and waited till that one dried. That way the berry glaze couldn't run together in one big blob. Leah's idea! ;) 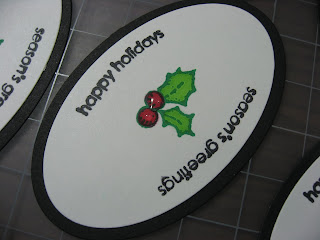 Then I worked on the other half. Notice how much more organized I was by the second half--hehe! Such straight rows. ;) 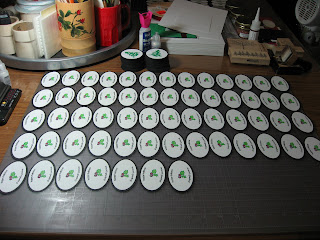 I had them laid out to dry overnight. Now they don't stack well because they are lumpy, but here they all are. Done with that step--tada! :) 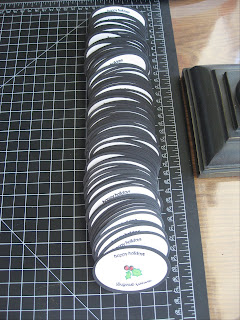 I didn't do things in the order I thought I would, but that happens a lot when you have a lot of steps. ;) Next I am going to start putting the snow on the trees--and cutting ribbons.
****
I will probably make a quick trip over to Dagan and Leah's tomorrow afternoon. Leah has milk for me and she needs the Dahle cutter to trim some pictures they bought that are a titch too large for the frames they purchased. We want to make an envelope order from ClearBags.com, too. So, I'll still get to see them briefly this week. :)
****
Today I am washing clothes. Nice to see the sun again--even if it is only 37 degrees outside. Supposed to get back up into the 40's the next couple of days. It's a fine day. :):)
****
Hope you've been having a good week and nobody suffered from that 2,000 mile wide storm front?
****
"Not only must the most privileged feel they are bothers and sisters of the most destitute, but the most destitute must feel as well that something within them makes them equal to the greatest sages and geniuses."
Omraam Mikhael Aivanhov
Posted by Rita at 3:46 PM

Hey there Rita, the storms wasnt bad here at all mostly northwest of here. Thanks for asking and worrying about me :o)

I love your plant hanging from the ceiling, it is so full and beautiful. I have a couple of plants I need to bring in from outdoors when it starts getting cold here. We are still running the air here but the temps will be over 20 degrees cooler tomorrow for us I cant wait!

You have been busy with the crafting I love those, just looking at them gets me in the mood for the holidays, I cant wait to put up my christmas tree LOL

I hope you are having a good week :o)

You sure have been working hard Rita.

We got lots of wind gusts but none of the bad stuff. It sounds like winter has hit your neck of the woods with a vengence.

I am so glad you have no leaks. You got a break for a change!

Really stormy here too! Just a really bad rain storm is all, but still a storm.

That's great news about the leaks! :)

Hi Rita!! Girl you talk about me being busy look at you over here! I guess it is that time of year isnt it! I know I am no where close to being ready!

Yes I did make those two little journals, playing around with them learning to put them together, but sad to say I did not do a very good job so just might scrap them but not certain yet. I need to learn to do a better job of binding them!


Finally some sunshine today but we did have a killing frost last night....brrrr


Have a great weekend!

I was happy to hear your apartment was leak free. The TV news reported the bad storm front coming across the country, but all we received was some strong gusts of wind and about an inch of rain. I know lots of other folks weren't as lucky. I sure hope those roofers get that job on your apartment complex done soon.

The ovals for your Christmas cards are really looking great. It looks like Leah's idea for the berries worked well, too. Good job to the both of you.

I hope your day today was a good one. Bring on the sunshine! :)

We're having snow here, but it's sunny and no wind, so it's not so bad. My cats are getting adjusted to being inside for the winter. Glad you're doing okay and getting lots done.

Lynn--Glad you avoided the storm.
The plant was a gorgeous Mother's Day gift from Dagan and Leah.
Sounds like you love the holidays, too! ;)

Tori--Wow! Storms everywhere! I hope you are dry over there, too! :)

Reba--Don't scrap the journals! If you're really unhappy with the insides--maybe you can reuse the covers. The covers look so nice!
Yes--it's been frosty here, too. Cold early this year. :)

AliceKay--The roofers have been back. Not sure what they've been doing, but I heard them above us again on this end. I almost wanted to shout up there--please don't "fix" anything on my side! ROFL!

Thanks Sue!
Time to batten down the hatches for winter, that's for sure. ;)

Look at all the purty card "fixin's".