You'd have to click on the picture to see, but there were many moths clinging to the screens in the livingroom last night. One is by the red car and another shows up against the grass. At one time I counted eight of them against the screen. It was cold quickly last night and they were seeking the warmth, I assume. (Got down to 38 degrees last night.) Karma was glued! She sat and cried for me to do something to let her catch them. 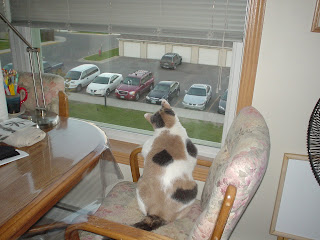 Karma may not know what to do with a bird, but she loves to kill moths and she eat flies and other small bugs--yuck! I do not encourage it! The Japanese beetles that look like an orange lady bug--they make her sick and she barfs, but she eats them anyways! Duh! 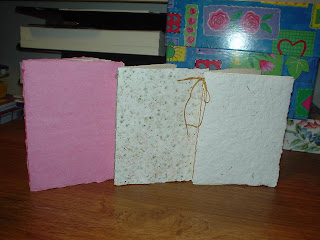 Me--I made a few more bookcards. Actually made another one after this picture and glued the paper moulds on the front of a couple of them. Was a quiet night. :)
Posted by Rita at 4:29 PM