My sleeping around the clock got interrupted and I guess I am right back there again. I've been up since 3:30 yesterday afternoon. Going to bed soon here--but I thought this time I'd blog before I went to bed instead of after I get up. Just had to show you what I got done last evening and all night long--little by little. I worked on the inside pages for the bookcards. 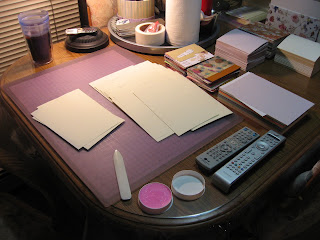 I'd pile them up in sets of five pages and then fold-fold-fold. 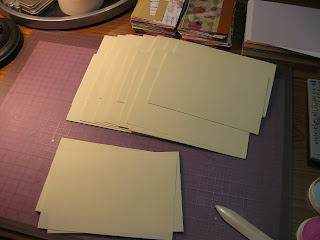 When the timer went off and my hour was up I'd go watch my Netflix movies. 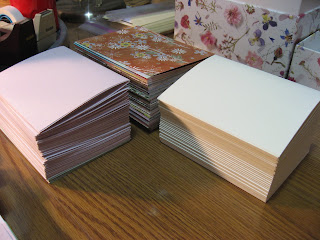 I watched X-Men again and understood it better after having seen the new Wolverine movie. Yup! X-Men was the one I had seen. Now I think there are two more for me to watch.
I also watched Rage:
A young blogger attempts to document the inner workings of a top New York fashion house in the week leading up to a major show, but his behind-the-scenes interviews take on much greater significance when a runway model is murdered. A celebrity supermodel (Jude Law), a war photographer (Steve Buscemi), a critic (Judi Dench) and other personalities share their versions of the week's events in Sally Potter's darkly comic riff on the information age.
Hard to describe--but fascinating! The whole movie takes place with an assortment of fashion industry people coming one by one and talking in front of a green screen to a young boy/teen (you never see him or hear him). He's apparently doing a school project--or that is what he told everyone. They didn't know he was posting the videos on his blog. A murder of a runway model takes place (off camera, of course) and people come and discuss things with the young man. The acting--well, I remembered Judi Dench was in it and I love Steve Buscemi--but I never re-read the sleeve. Well, I had to go back and re-watch some of it because I had no idea that was Jude Law playing a supermodel!!! I knew it was a guy--a male--but he was actually exotically beautiful! No lie! Those eyes! I almost kept it to watch it again just because of realizing at the end that it was Jude Law--hehe! But Netflix takes up enough of my life as it is--ROFL!!
Anyways, what a strange movie! Compelling just for the acting alone. Of course, that's all you're getting come to think of it. I don't think it was ever clear what happened off stage or who killed the model (and I won't tell you anything else), but I didn't really care. I got wrapped up in the array of characters--which was the point, I guess.
Movies-Schmovies. Karma slept. 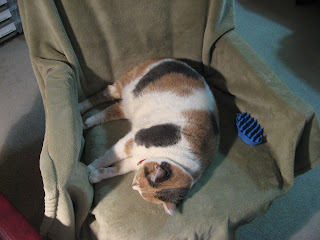 By morning I had finished folding ALL the business paper I had! Here's the finished stack of covers and four stacks of folded paper for the insides of the bookcards--tada!! 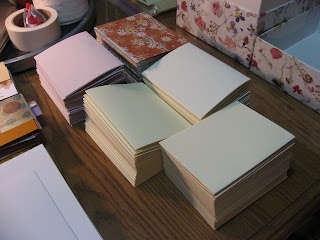 Another step done!
I have never mass produced this many bookcards! I think the most I did at one time was thirty-three (just for me, of course). We have never mass produced this many regular cards, either--not counting Christmas cards, I mean. Like the ones we call the "scrap cards" we are working on that I showed you yesterday--(because they are made using the scraps from my bookcard covers). It's exciting! :)
Don't be concerned we've lost our minds--ROFL! I am not worried if other people don't love the bookcards as much as I do and they don't sell because you know I can use them up myself. And Leah and I would also use up the scrap cards. (Leah's not a letter writer so she doesn't use the bookcards.) We already have transformed scrap cards into whatever we need--birthday, thank you, get well, congratulations...everything but Christmas cards, I think. We love them. :):) But we are quite willing to part with some of them--never fear. So we can make some more--tada! You will see some of these on Etsy later on.

Yes--us crafty folk are often a little crazed, aren't we? LOL! I can hardly wait to see how they all turn out!! I do want to pick out the best ones for Etsy. :):)
Anyways, I pushed my limits--so tomorrow--I mean today--after I wake up--I'll take it easy. Do other things--not cards--save the shoulders. But I can walk by the table--often--and gaze at the stacks--the progress--and smile--and smile. Another very good day indeed. :):)
Posted by Rita at 8:13 AM