I couldn't resist doing at least one cupcake this morning to see how the caulking would work. I love it! This is it! 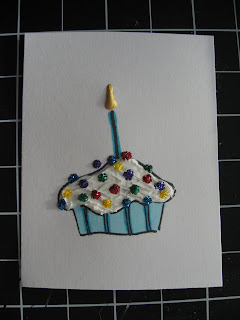 Here's the new caulked frosting version next to the former glitter frontrunner. No comparison. :) 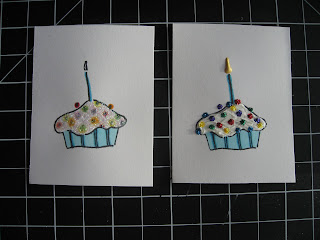 I have to manually kind of paint on the caulking and let that dry and then add the dots of the many colored Stickles. Then I used a toothpick to add the metallic gold acrylic paint for the candle flame--which wasn't quite dry in these pictures due to the overanxious photographer--LOL!
****
I know. I know. I have just made much more work for myself. But I really like these so much better. Now I have to find out if I can run them thru the Cuttlebug after they are already decorated or if I should cut them all out beforehand. ;)
****
This is what it looked like over in the field yesterday. 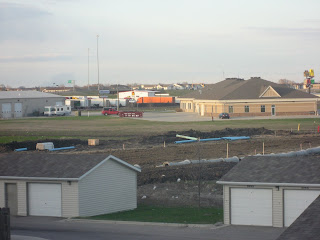 They are definitely laying pipe and have staked out an area. Looks like they're building something, for sure. We're wondering if maybe they are even adding to our dead end road? 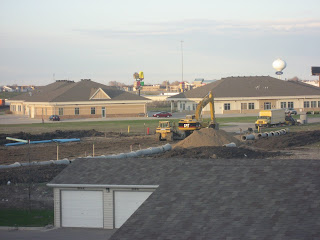 And this summer is not going to be quiet for another reason. We have never had this big of a "gang" of young males in the building. 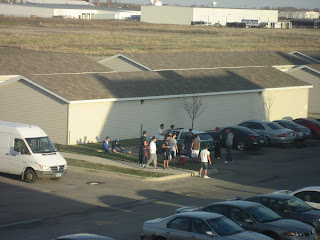 A few of them drive. I've seen 5-6 of them hanging around cars (seem to be fixated on cars) with one of them standing in the open driver's door before. 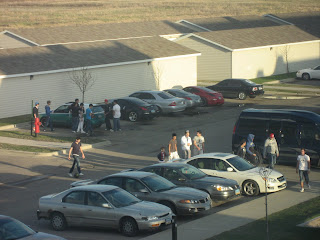 One of the nights Dagan and Leah were here there were maybe half a dozen young guys hanging around a sports car in the parking lot and the police came and talked to them. I think the one young guy was the owner or his parents owned the car? Somebody must have called the police because they don't show up here unless they've been called. Never do drive thrus of our parking lot or anything like that.
****
This car they were all gathered around last night was sure not a fancy new one being shown off, by any means. But I counted 16 teenage boys plus the one younger boy who seemed to be with his big brother. I thought there were maybe 7 or 8 of them (we've never had that many) but here there are twice as many--from one year to the next? Kind of odd. We usually get younger families with smaller kids and babies, actually. Just a curious thing.
****
I have never seen them misbehave. They could all be very nice young men. But if somebody was already calling the police when they saw half a dozen of them hanging out in the parking lot...this huge group might be in for some harassment. I hope not. Unless they do something wrong, they should be given the benefit of the doubt, right?
****
My only personal trepidation is due to the fact that I never trust any human beings in numbers--ROFL! I have a deep instinctive avoidance of mob mentality. I hope whoever the "leaders" are in this group that they have good heads on their shoulders. I send them positive energy. :):)
****
Anyways, it is the end of the week. Leah and I plan to hit Tochi's tomorrow morning.
Hopefully I won't forget and I'll be back this weekend with pictures of the inside of Tochi's. Supposed to be a gorgeous day today and get close to 70! Awesome!
****
Have a great Friday!!
****
"With heart, the impossible is possible."
Catherine Calarco
Posted by Rita at 8:19 AM

Hey, as long as you're happy with it, then that's the way to go with the cupcakes, I think. :)

I completely agree; if they don't do anything, they should be left alone, and given the benifit of the doubt. I wonder sometimes if it's people rushing to call the police just because groups of teenagers are seen in an area that makes them do some of the things they do? I mean, perhaps they figure, "if I'm going to get in trouble anyway, I might as well do something to deserve it." Or perhaps it's they're way of acting out because they're fed up of being labeled as trouble even if they aren't? Either way, I tend to ignore groups of people - teenagers or otherwise - unless they're doing something that affects me in some way - be it directly or indirectly - then it depends what they're doing to whether I leave them to it or do something about it.

I can understand why you woould find those teenagers upsetting (or unsettling) - It seems like so many of them have no manners these days. I bet someone called the police since they were near their car.

I hope they don't cause trouble.

It definitely looks like they are putting in a road - and it will be drained - Hmm.. access road to a (new) parking lot?

Your cupcake looks so yummy they could nearly be edible!

Tori--The white caulking looks more like frosting and then the colored dots sit on top of it like they would in real life--not like underneath the glitter when I tried that. The Stickles are a glitter glue type thing andso the dots are bright bold shimmery colors--yellow, blue, purple, red, and green! :)
Yes, sometimes with kids misbehaving it is a chicken or the egg thing. Like I said, I haven't seen them doing anything wrong, but it is a big group of young males so people keep an eye out, I guess. We wouldn't have noticed them before (and the police) if we weren't sitting at my table by the window eating--hehe! ;)

Iggy--That's what we thought, but one of the young guys opened up the car and gave the policeman the registration. So it either was his or his folks. It is very frustrating to see a young kid like that with a new expensive sports car here in low income housing. The foreigners who move here don't have to pay any rent. I don't know for how long, but it sure doesn't seem fair. They have some really expensive new cars and trucks out there in the parking lot. Really bugs Dagan and Leah because they know cars, unlike myself. There's even a new Mercedes in the parking lot, I guess. Our government sure does work in mysterious ways--LOL! ;)
We're beginning to think it might be a new connecting road. And on the bumpy dead end road people park on both sides! So it is down to one lane more or less. They don't have enough parking for the people who live here to all park in back. So, going to be interesting if they put in a through street with more traffic. ?? Local government also works in mysterious ways--LOL!
I thought you might like the cupcake with the caulk frosting--hehe! ;)

Seems to me cops would materialize out of thin air whenever five or more of us gathered when I was a teenager, whether we were up something or not.

That's a cool looking cupcake! It looks like you could just pick it up and eat it. :)

I think a group of teenage boys (or young men) hanging around like that would bother me, especially if they were hanging around my car when I wanted to use it. For your sake, as well as your neighbors, I hope they aren't trouble makers.

Yes, it most certainly looks like they're building some kind of road. I hope it doesn't cause problems with your street.

Have fun at Tochi's tomorrow. I hope they allow you take pictures of the inside so we can all see what it looks like. :)

I would be cautious of a group of teens myself but I sure hope for everyones sake that they are nice and they just want to hang and chat with each other and not make trouble. That cupcake is just the cutest ever I love it!! My friends hubby and their daughter are driving up to ND this weekend so that she can begin her life with her hubby that is already there with the Air Force. They were lucky enough to get a house on base too. She had to wait til she was done with school(college) before she could move there. Hope you are doing well and a Happy Mothers Day to you :o)

Tatty--I grew up in a new 50s Minneapolis suburb (Fridley) and we ran and played in huge groups of kids all over the neighborhood when we were young. We weren't considered a threat until we were teenagers and used to drive up and down a main drag and hang out at the burger drive-ins. The cops were always on the lookout and patrolling all weekend. I forgot about that because I was rarely a participant. Thought it was boring--hehe! ;)

AliceKay--Thanks! I'll probably make the frosting a little thicker, too, now that I know it works well. :)
I hope they aren't troublemakers, too. I haven't seen anything yet. That one big brother even held his little brother's hand as they crossed the parking lot. I'd hate to see them change.
It's Saturday morning and I am charging my camera battery--chuckle! ;)

Lynn--Me, too! They've been good kids so far. Your daughter must be going up to Grand Forks Air Force Base. Even farther north than us here in Fargo. ;) I bet they will be so happy to be together again. That has to be so hard to be young married folk and living apart. Highway 29 up to Grand Forks was closed earlier because it was under water. Good time to go now--before it gets hot and the mosquitoes come out--ROFL! ;)
Happy Mother's Day to you, too! :)

Sounds pretty (the cupcakes, I mean). :)

God bless ya and have an amazin' Mother's Day weekend! :o)