Karma soaking up some rays... 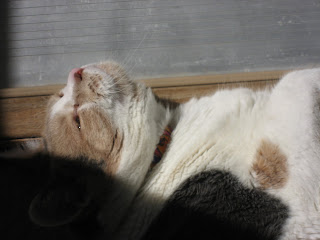 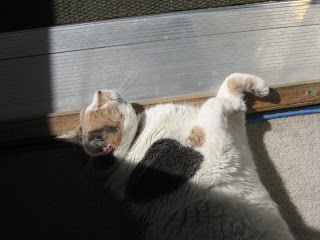 Dagan and Leah both came over last night--and brought Pita Pit for dinner! The wind did change and we had to close the windows. 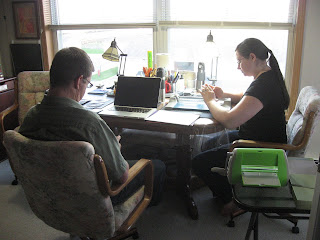 They were both on their smart phones when I took these pictures--hehe! 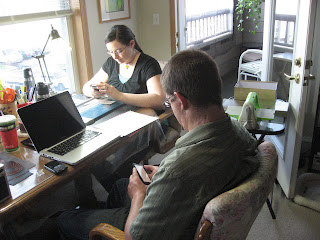 Dagan has a new "tablet" that is really cool, too! I got my questions answered about the new phone. Turned out I had gone offline somehow and wasn't on the internet. That's why I couldn't get to the "market" to look for free solitaire games. (Obviously, I hadn't tried to go online on my phone for several days.)
****
I picked out a whole slew of free games that I can now slowly make my way through and decided which ones I want to keep and which ones I'll trash. They even had a good free "Yahtz Me" app that is, of course, like Yahtzee. Dagan was playing some game where he was building a bridge trestle for a train. It was obviously difficult to do because we kept hearing trainloads of people screaming as they crashed into the valley--and then Dagan laughing so hard I thought I might see a tear roll down his cheek! ;)
****
[We really had an extra, extra dose of laughter last night because Dagan's squealing giggles are extremely contagious! It was above and beyond our norm.]
****
Screaming people falling to their deaths, Dagan's breathless laughter, endless cups of dice shaking, and yet Leah diligently persisted in making her birthday present tags--LOL! She finished up what she needed for right now and will complete the rest of them in a couple weeks. (Not meeting next week unless it rains as Leah wants to golf if it's nice out.)
****
Leah, the recycler extraordinaire, is making permanent birthday present tags. She'll just save them and reuse them every year. I had her take some pictures before they left. This one shows the front and back sides. 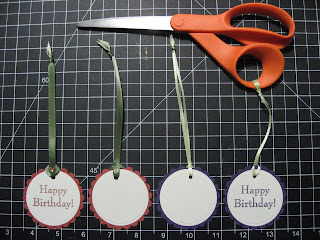 The scalloped and plain circles were cut out with Spellbinders dies using the trusty Cuttlebug. She embossed the "Happy Birthday" on one side--scallop matching purple for the girls... 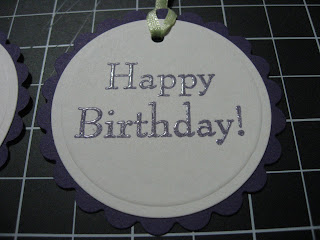 ....and the rusty/bronze color for the boys. Three layers of paper sandwich. 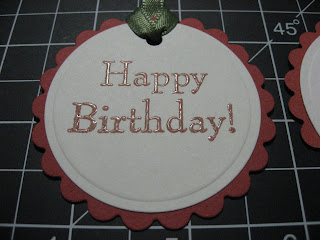 She can attach and detach the tags like she shows on the scissors handle here. Looping the double ribbon over what you want to attach it to, splitting the tied ribbons at the end knot, pushing the tag in-between the split ribbons, and then snugging it up as you see. 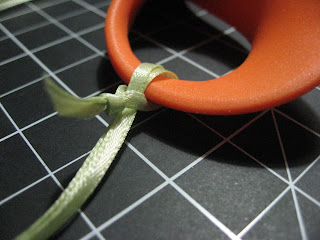 I showed Dagan and Leah the rock and was telling them what Spruce wrote to me about it. We got to discussing whether 1,000 million was a billion, as Dagan said it was. He's probably right. I just wrote down what Spruce wrote to me. Math is not my thing--in any way shape or form. And maybe it's not Spruce's thing, either, right--hehe! So I looked it up on Wikipedia this morning:
"1,000,000,000 (one billion, short scale; one thousand million, long scale)" I guess Spruce and I are in the clear! ROFL!
****
FYI--both Caroline and Leah thought the rock looked like a dried poop patty of some kind when they first saw it. That just makes me giggle!
****
Oh, and I was looking over the pictures I saved from the tripod box and saw "gear level handle"? What? 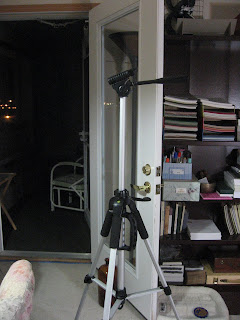 Well, I'll be danged! Look how high I can get this thing to go up from the base of the tripod! It was so high that I'd need a stool to look through the camera to see where I'm aiming! Cool! Might be able to get a more overhead shot. 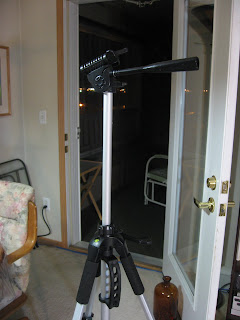 This morning I took a picture of the tripod in smallest mode next to the little flexible gorilla tripod I have been using on my craft videos since I started making them two years ago. 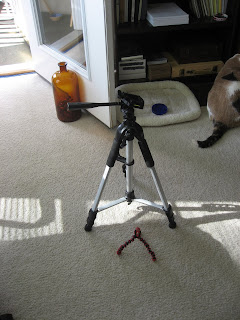 Love my little gorilla, but I had to make a huge stack to perch it on top of in order to get it up high enough to film me at my craft table. 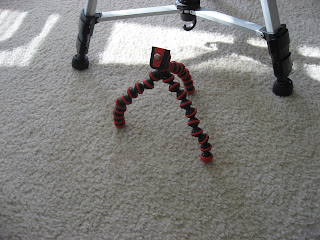 At first I had a stack right on the table, but then I shook the camera quite a bit sometimes. (Even just talking with my hands I can be a table pounder, I discovered--and that's not counting what I am doing when I'm actually crafting.) So then I moved the stacking pile on to a TV tray and put that right beside the table. That is how I filmed most of them. Now I can try it with a real tripod! True. I am too sore to go near the table for a day or so because I sat there all night last night when Dagan and Leah were here. (Dang! I keep forgetting to set my timer lately!) But soon! :):)
****
Anyways, we had a grand time. It is a glorious day again. I am heading out to the porch to read. Karma's already waiting for me. :):) Have a super-duper day!!
****
"The measure of a man's real character is what he would do if he knew he would never be found out."
Thomas Babington Macaulay
Posted by Rita at 11:03 AM

Im so glad you had a good time! :) Love that Karma

That's great about the tripod. Good thing you kept the box for now, eh? ;)

Those birthday tags are really cute. I think, though, that I would have difficulty getting people to leave them with me to recylce.

Karma is one lazy kitty. It sounds like you guys had a lot of fun playing with those phones, crafting and everything else.

Hope you aren't hurting so bad today. I went to my Rheumatologist today - got dexiscan that showed the arthritis has gotten worse (which I already knew by the pain). We are going to try some physical therapy. I'm hoping it helps!

Have a wonderful day!

Nice pictures of Karma soaking up the sun. I'm so jealous. We've had rain and thunderstorms all day long and some parts of the county are under flash flood warnings again.

Sounds like you and the kids had a great time together. Isn't it nice to hear your kids laugh? At even the silliest of things? :)

The gift tags are really nice. Great idea, too.

My tripod cranks up like that, too. I don't need a step stool to look thru the highest level, but maybe I'm a bit taller than you? Have fun using it, tho. They come in handy sometimes...especially on zoomed in shots.

I hope you're feeling better and enjoyed the time reading out on your porch today. *hugs*

*hugs to Deanna too*

What number sunscreen does Karma reccomend? :) She needs some of those ultra-blue sunglasses... she'd be waaay too cool with those on!

That tripod is really neat!! I was thinking about getting a Gorilla.

And oops... if that rock is 3 BILLYUN years old - I don't want to hear it's story anymore!

I wanna come curl up on your porch with Karma and bask in the sun. She looks so relaxed. Cats much have such a relaxing life.

Nikki--Dagan had us laughing and giggling! Was a great time. :)

Tori--Yes, and I hadn't expected Dagan to stay, so that was nice.
I love the quote, too. That's when you find out what someone is made of. ;)

Deanna--I think everybody that knows Leah already knows what a recycler she is so it is no surprise. I think she is also going to pretty boxes for gifts that she can reuse, too. Now those would be harder for her to get back, I think--hehe!
I've had so many pills for so long that my stomach doesn't take well to them anymore--plus I have bad reactions to some families of meds. I weaned myself off all my meds last year and just have pain pills around for bad days. And then the darvocet that actually took the edge off and didn't make me sick--they took it off the market after all these years--arg! The pharmaceutical companies just come out with something similar (but not the same and often doesn't work as well) for way more money. Makes my doctors mad even. I can totally relate to constant pain. I hope you find something that helps. *hugs* :)

AliceKay--They were right about the rain coming back by Friday. The sunny porch time is on hold again. :(
Yes! Dagan occasionally will fall into this total lose-control, squealing, can't breathe laughing fits that makes everyone around him laugh even if they have no clue what he is laughing at. (I wonder where he got that from--hehe!) We have had rare occasions where we have set each other off in public and can't stop! Makes me giggle just to remember it. :)
I definitely need a step stool. I was only 5'2" (actually 5' 1.75" but I always rounded up) and who knows by now. I might be down to 5'1" or less. They say you shrink with age and the arthritis in my back sure feels like compression--LOL! ;)

Iggy--I think Karma would look good in blue sunglasses!
Was such a fun night! Haven't laughed THAT hard in a long time! ;)
I just posted pictures of the small gorilla I have been using. I've really used it a lot. You can also wrap the legs around something, too. It's quite sturdy for being so small.

Barb--I agree. Just looking at Karma sometimes probably brings down my blood pressure. Talk about relaxed! I want to come back as a spoiled pet cat! ;)

Dont know what pita pit is but it sure sounds good LOL Im so glad you all had a wonderful time together :o)

OH what a fun night! I giggled out loud just thinking about you all laughing....particularly Dagan laughing and squealing as a train load of people fall to their deaths screaming. Laughter certainly is contagious. I love to hear my kids laughing....it never fails to make me smile or laugh depending on the situation. We like playing Yahtzee and I also enjoy the PC games that are similar.

Leah's gift tags are SO nice!!!

I forgot you had the gorilla tripod...THAT'S what I want. Yay on finding out another little trick with the new tripod...there'll be no stopping you now.

Karma reminds me so much of Cody as he will lie near windows that have the morning sun streaming through them. They obviously know how important vitamin D is. lol

Anywhoo, have a lovely weekend!

Lynn--Pita Pit is the good pita place in town. The "other" one (I won't name names) we've tried and unanimously voted off our island--hehe! I tried a falafel pita and it was really good. Sure am trying new things since I gave up meat. ;)

Serena--Hehe! Dagan squealed and the imaginary people screamed! And what made it funnier is that Dagan still squealed and laughed over and over and would show us the trains crashing into the gorge...LOL! I'm smiling just writing this. Having a mother like me, Dagan is never afraid to show his silly child self to the world--ROFL! ;)
I'm not sure if I would have gotten the bigger gorilla tripod or not. It's not like it is that much taller and the little one is sturdy enough when you get the legs where you want them. I've been really happy with it and will continue to use it for certain things, I'm sure. It is small and convenient.
Miss Karma is a sun worshiper. I'm glad cats don't get skin cancer. At least that I've heard of. ;)
You have a good weekend, too, Lady!