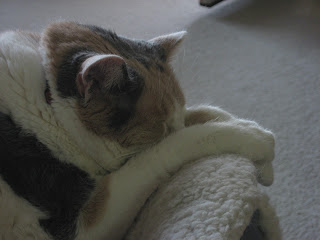 Actually she was watching a nature show with me and fell asleep--LOL! 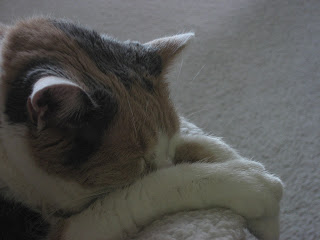 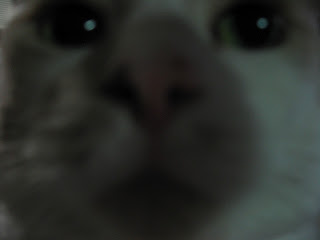 Have a super duper weekend!!  :):)
****
"Your success and happiness lie in you....Resolve to keep happy, and your joy and you shall form an invincible host against difficulties."
Helen Keller
Posted by Rita at 12:38 PM

karma is cute 'praying'. i did know about the canned pumpkin. a lady at work uses it for her dogs so i keep a can on hand here in case my dogs get an upset stomach. just need to be sure it is not the pie filling type - just real pumpkin.

Oh my I love that cat! she is so cute and it does look like she is praying.

I have a friend with a cat and I will mention the canned pumpkin to her.

I had no idea about pumpkin and cats! Wow, that was actually quite surprising. If i ever get another cat, she will have pumpkin. Glad to hear you are getting the flap fixed, and that your 'wave will be replaced. Hugs to you, Rita!

Such cute pictures of Karma! In "real" life, I'm allergic to cats, so it's nice to come here and be able to enjoy one that won't make me itch or bother my breathing. :)

Pumpkin. Well. Whadyaknow. Karma prays. Good Christian cat. Comment problems -- might be resolved at some point. You never know. Sometimes when I least expect it, something starts working.

Nice post.
The canvas prints on my craftystudy walls are bought - I'm not artistic, though I'm trying to learn some skills.

Yep, pumpkin is a miracle cure. Wouldn't have thought a cat would love it but dogs don't mind it.

Now I have never heard of canned pumpkin don't even know if you can buy it here in Australia but then I have never looked for it......either

Yes Blogger can be a right pain in the backside at times......lol

What else hmmmmmm ok I can't have my micowave up high as this short ass can't reach it........lol

Never heard about the pumpkin before but Karma seems to love it, so that's all that matters, even if it's served cold! I just wish I had someone take care of me as well as you do Karma! lol waving hi from the hills of North Carolina :)

So sorry you have to wait for your microwave!!!! They really are handy inventions!

YAY on the dryer flap being fixed though! And to think...it ONLY took seven years, lol!

Canned pumpkin?? That's just so weird! It really doesn't taste good right out of the can.

Looking forward to seeing all your new stuff!!!! It's a "high" for me, even if it isn't for me, lol! I LOVE CRAFTY STUFF!!! The new SU catalog is now live and I can't order anything. So sad!!! So I just drool over it and make my plans.....

Have a calm and peaceful Sunday!

Karma did look like she was praying; too cute!! Koda has a sensitive stomach so we have used pumpkin in the past and it does work wonders to help settle it. One time we accidentally got the pumpkin pie mix with the sugar added in it, not the straight pumpkin. That didn't sit well with him and we learned our lesson :)

I totally understand with the comments. I found there are a few blogs I have to comment on through Google Chrome or the comments won't show up though I see that I made one (Iggy's is one of those blogs). It is so frustrating; you take the time to leave a comment and know its there and then it doesn't show up. Oh well!

glad you'll be getting a new microwave!

Pumpkin huh? I'm gonna have to try it. I have one barfer. I think the other two are ok, but I'll give it to them anyway and let you know how it goes! I love this post Rita! It was so breezy and fun! Way to go. when the flap guy comes back start dancing in circles and saying
Who was right? I was right! That's right I was riiiight!"
He may not love it but you will have a blast and love it. hee hee

Re. Karma's pic - When you said she was watching a nature show with you, my first thought was that Karma was closing her eyes through the gory bits. lol

Bummer about your microwave dying on you. Poor Jack (our Jack Russell X) doesn't like his food cold either. Yes, our boys are spoiled too. ;)

Pumpkin is a staple food in an Aussie diet...we LOVE it! That's the one thing I missed when we lived in the States because, there, it's only canned or available at Halloween time. Americans tend to only eat pumpkin in sweet pies whereas we eat it as a vegetable side dish. Well, that was my experience in the States anyways.

I'm glad the maintenance guy tended to the dryer flap. Well, hope so.

I hope Blogger sorts itself out soon for you. How frustrating! Have you tried selecting the option NOT to moderate comments? After a few hours, re-select it. May do the trick, who knows.

Have a lovely weekend, my friend,

Love that picture of Karma praying. How sweet. She is such a pretty cat. I'm glad that you mentioned that about the pumpkin because blue has a sensitive stomach. That will come in handy sometime. Hope you get a new microwave soon. I would go crazy without mine. And wow, to finally get that flap fixed would be great. wouldn't it be funny though if you couldn't sleep without it LOL

Seeing pictures of Karma makes me smile...even on bad days. :)

That's neat about the canned pumpkin. I had never heard of that either, but it's good to know.

I hope the dryer (vent) flap issue has been resolved so you won't hear that bang bang bang against the side of your building anymore. I hope the new microwave goes in without any problems. Karma will be thanking you over and over when she gets to have her warmed up food again. ;)

Raining here today and more rain on the way. But...it was nice enough yesterday afternoon that we got the lawn mowed and I pulled lots of weeds. We dumped the old sand out of Ryan's sandbox and hauled it down to the creek bank. Terri shoveled lots of new sand into the wagon and brought it up, so now Ryan has lots of fresh new sand in his sandbox. He wanted to play in it the other afternoon, but it was full of ants and bugs and stuff from the trees. Even though it has a cover, that stuff still gets inside.

Helen Keller was such an inspiration. Nice quote. I hope you're having a super duper Sunday. :)

Dear Rita, I hope to return to your blog during the week and catch up with your postings. I've gotten so behind. But I especially wanted to comment on this one because of the tip about pumpkin sauce.

Maggie eats both wet and dry food and is the one who throws up the most. So I'm going to try this. I have a can of pumpkin in the pantry! I'll let you know the outcome.

I'd surely miss the microwave. Good luck getting it installed soon. Peace.

One of my cats barfs quite a lot, but the vet says that he is healthy.
They both eat dry and tinned cat food, but I never thought of using pumpkin. Seems a good idea, although he was fine this afternoon while bird chasing in the garden!
I'm pleased that you have finally got your vent fixed...seven years would have driven me mad!
The blogging world seems to have gone crazy since this last change, and it is worse because I am so newish to it, so I hope things get sorted out for you soon! ;)

YAY about the dryer flap that wasn't! :)

Hi Rita. That pumpkin idea for cats sounds like it's worth a try for our fella. Thanks for the suggestion. It will be great if it works - Dave

This is such an adorable photo! Karma is so cute! :-)

Karma makes my day! My kitty is in awe of her.

Sorry about your microwave. I almost fried thmine. I put a slither of apple pie in, hit reheat button amd forgot about it until I came back into the house and smelt smoke! Opened the door and blackened mess and smoke billowing everywhere. It still stinks 6 days later.

Did manage to kill the electric kettle though. New one has a blue neon ring like a racing car....

About time they fix that flap..LOL you have been waiting for them to fix it forever. You will have to report the next windy day! :)

yippee for the dryer flap & the new microwave!

i didn't know that about the pumpkin. next time i head to the store, i'll pick up a can...milo gags and pukes. thought it might be old age! if the pumpkin helps to soothe her tummy...that'll be good!

i think google...blogger...just never stops having problems...if it's not one thing, it's another!