When I was a kid these are the kind of salamanders that came wandering up from Moore Lake into the brand new Fridley suburb of Minneapolis we had moved into in 1956.  (Note: I found all these photos today via google search.) 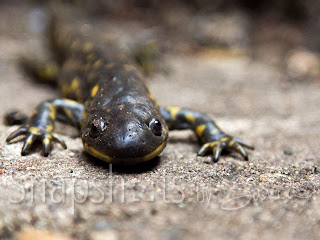 After a good rain they came waddle-sliding along and fell into the new window wells. 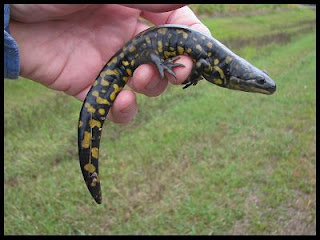 I wandered around the neighborhood with an empty three pound Folgers coffee can that had a little water on the bottom... 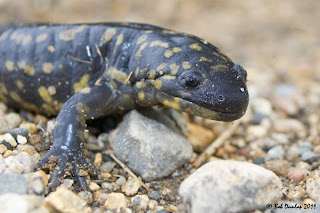 ...and I'd lay down on my belly to reach down into the window wells and collect the lost salamanders so that I could bring them back down by the lake.  If I forgot...mummified salamanders.  :( 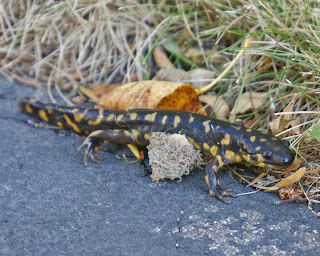 I fell in love with these silly, gentle things and still have a soft spot in my heart for them.
****
Years later, when I was working in pet shops, something new became available.  Well, how could I not fall in love with axylotls!  The first one I took home I got for free because three of its legs had been chewed off by other axylotls before it ever got to the store.  When it tried to walk along the bottom it rolled and spun, poor thing.  It was a black one similar to the one below.  I hand fed it and kept it in a tank with lower water to prevent as much spinning.  Blew my mind!  All his legs and feet grew back within a few weeks!  The manager at the store didn't know that axylotls could regenerate limbs, but let me keep him.  I had him order copies of the one book we could find on axylotls. 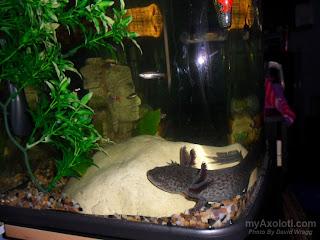 I named him Axel.  I know.  Not very original.  But I named him after goofy, Scandinavian-accented Axel from Axel's Tree House that I used to watch as a kid.
****
So, of course, when I got a white one that looked more feminine, I named her Carmen after Carmen The Nurse who used to visit Axel in his treehouse and later took over the show for him when he died. 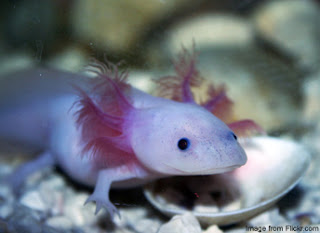 And finally a got a hefty brown speckled axylotl and named him Clancy after the Clancy The Cop show as long as I had been following the morning kids' TV show naming theme.  Clancy the Cop and his sidekick, Willie Ketchum--LOL!!  Only kids from Minnesota would remember any of these local original programs. 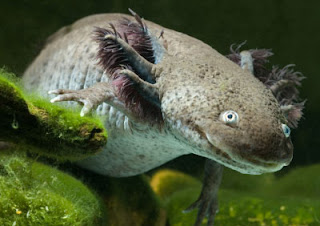 Anyways, I got a lot of questions about what an axylotl was.  They are actually related to tiger salamanders and it can be tricky to tell them apart from the tiger salamander larvae you see below. 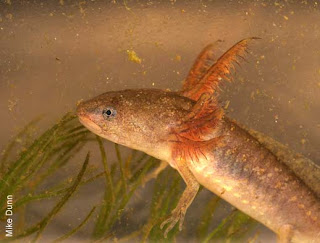 The difference is that axylotls don't turn into salamanders like this tiger salamander larvae form will.  (We got a couple of these in by accident in the shipments at the store.) Axylotls remain in larvae form and yet mature and reproduce (lay eggs).  They live out their lives underwater.  But they have been known to switch over and become salamanders if their water supply is drying up.  They can do this in a couple of weeks, but not all of them will be able to do it.  Once they do become a salamander they can no longer regenerate limbs and it shortens their life span from about 15 years down to 5 years.  Amazing survival skill in a pinch, though, don't you think?
****
You can read more and even see some short videos below in these links.

Edge (videos!)
****
Axel, Carmen, and Clancy lived about 7 or 8 years in a 30L aquarium.  I don't know what killed them to this day.  Something (in the water? in the frozen food?) killed all three of them within a couple days.  It was shortly after I cleaned the tank, too.  ??  Broke my heart.  I just see pictures of axylotls and they make me smile.  They have the goofiest, sweet faces and they're feisty.
****
Okay.  I also got asked about the "naming myself" thing.  I never understood what my mom meant by that until I was pregnant with Dagan.  His name kept coming to me over and over--awake and in dreams.  And I could see it spelled D-A-G-A-N with two As.  It wasn't even in the baby name book I had at the time and I couldn't remember ever seeing it in a book or on TV or anything.  (I have seen it since spelled Dagen--but you have to admit it sounds good with McGregor.)  I truly thought I was having a girl.  But when I met my boy--it was like--"Oh, so you're Dagan".  And I couldn't imagine him being anybody else.  ;)
****
That's it for today.  This took longer than I expected.  I have Caroline coming this afternoon and Dagan and Leah tonight for Sacred Circle...so I had best get moving here.  ;)
****
I do have a question or idea to pose, though, before I leave.  I don't mind answering questions at all and will answer almost anything you ask me.  ;)  I just don't like the obligating other people thing.  Now, I have seen a couple other bloggers who invite people to ask them questions and then they'll answer them in posts on their blog.  What would you think of that?  Do any of you have questions you'd like to ask me...about anything at all?  I also have some new people this last year who probably don't know much about me.  What do you think?  Let me know and go ahead and post questions for me if you have any.  If I get a lot of them I could just take one day a week as answer day or something like that.  Don't worry about overwhelming me with questions.  You know how OCD I am.  I'd keep a list going.  Would be nice, actually.  Give me something to talk about--ROFL!  ;)
****
Happy middle of the week!!  :):)
****
"Curiosity is free-wheeling intelligence."
Alistair Cooke
Posted by Rita at 12:13 PM