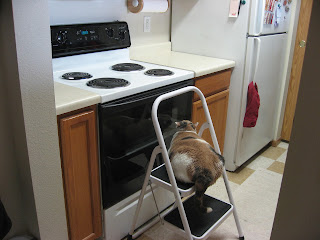 I had to empty off the countertops, stove, and the cupboard above the stove... 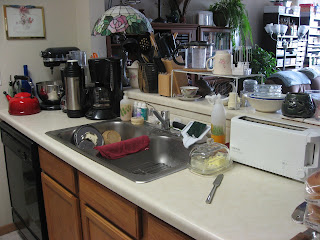 ...so there was a variety of stuff all over the other side of the kitchen. 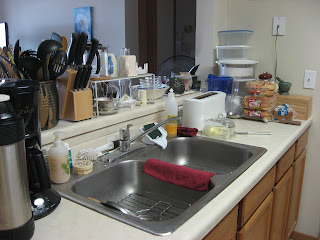 This empty side reminded me of when I first moved in...barren...not "home" yet. 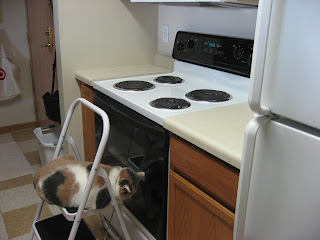 Here's the dead microwave that will be scavenged for parts by the maintenance man. 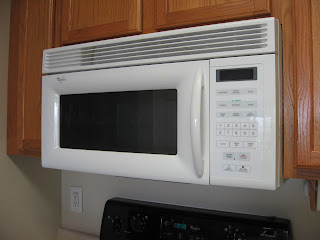 Karma tried to claim the stool as soon as I was finished with it. 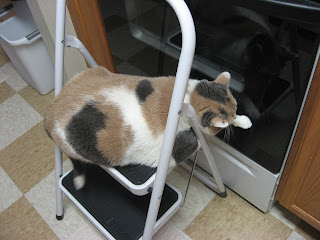 Her way of asking me to leave it out for a while.  (Because I was taking a picture she pawed the oven door.) 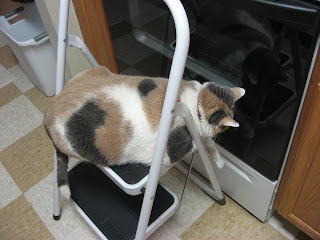 I warned her--don't you even think about getting up on the counter. 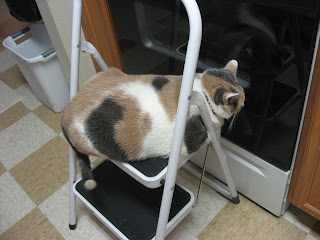 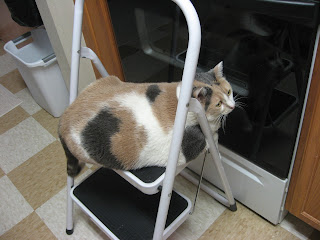 He got here about 11:30am.  I took a quick picture after he left with the old one and I had swept up seven years of cat hair bunnies, a marble, and a small mummified piece of potato. 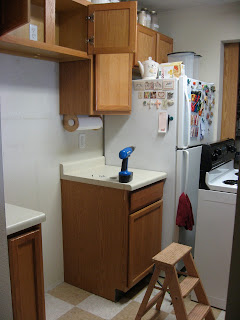 The new microwave and my kitchen put back together--TaDa!  Ahhh!  Now it looks like home again. 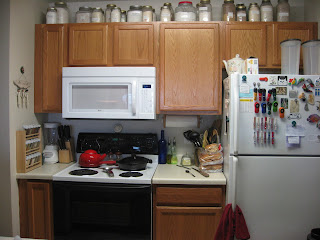 He asked me if I had heard the flap pounding.  Nope.  From what I could gather (keep in mind he has a speech impediment and I can usually understand him pretty well, but he was trying to describe things I have no knowledge of) I think there was some kind of additional piece that was never removed when it was installed.  He removed it and thinks that should keep it from flapping.  Told me to let him know if I hear it again.  I told him I would, but I am confident in him and his knowledge and don't expect to ever hear it again.  :)  Whoohoo!
****
A section of my Amazon order came (which is coming in several separate boxes, I guess).  These are the stamps I ordered (from Craftology.com through Amazon--so I knew this one would come separately). 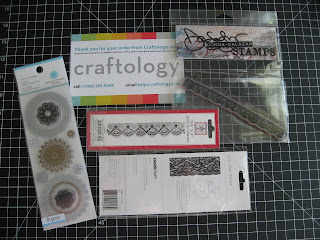 Doilies and lace stamps!  The doilies are a Martha Stewart stamp set.  Then all I need is some fine white embossing powder--which is coming with the Dick Blick order--and I can get some pretty cool faux effects.  Of course, you can make any color of lace or doilies, but I always immediately think white. 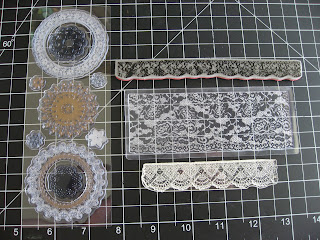 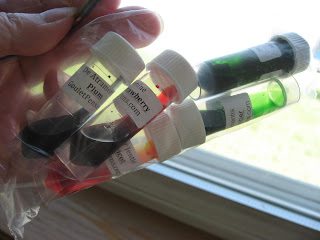 I had to chuckle!  Summer picnic is the theme... 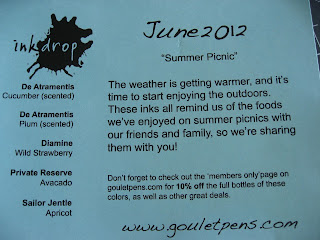 ...and a couple of these are scented again.  Cucumber should be interesting--LOL!  And plum?  So, my dear letter friends--you are fair warned.  ;) 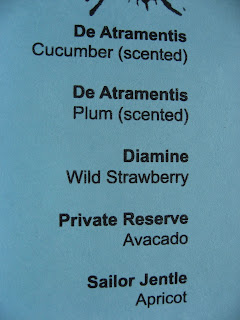 I discovered with the rose scented ink from last month that one of the recipients could still smell the scent after the letter arrived--and for days afterwards.  So, apparently, it doesn't fade away quickly.  Cool!!!  This ink company, De Atramentis, has a ton of scented inks--and I can buy samples at Goulet Pens.  What fun!
****
I saved the best for last!  Look what came in the mail from Tracey and her daughter (P) in Australia!!  Two gorgeous bookmarks!! 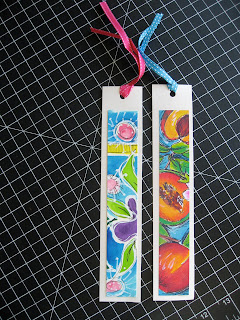 Made from Tracey's luscious, original artwork!  Aren't they just stunning?! 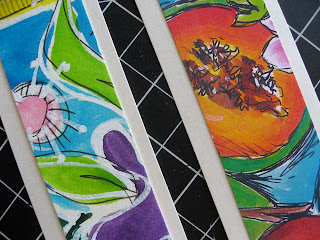 Tracey and her daughter are avid readers and are sometimes skirmishing over bookmarks.  I sent them each watercolor bookmarks I made a while back.  We had a kind of bookmark exchange before we knew what the other was doing--LOL!  These are wonderful!  Thanks so much ladies!  I shall treasure them.  :):)
****
Been AC hot here the past few days.  The porch was full of moths flapping against the screen to get out.  The swallows kept swooping up on the first warm day (when the moths apparently never slept all day long) to snatch a meal and pulling up short when their eagle eyes saw the screen.  After the first morning the swallows caught on and I never saw them diving near the screen again, despite the half dozen flapping moths--most of which lie dead on the carpeting out there this morning.  (Talk about Cat TV!!!  LOL!)
****
I got an email this morning that said that the velcro and Devil's Claw is due to arrive separately on Friday.  And I think another box is due Thursday.  Dick Blick is due today sometime.  The beginning of the month is filled with shopping excitement, eh?  LOL!
****
I did finally get a mass email from Traci Bautista--a welcome to the class email.  She was out of town doing a seminar or something.  Anyways, we're supposed to get an email on June 11th to register for the private class forum.  The first kit and video don't come out until June 20th.  So, I'm in.  It just isn't starting as soon as I thought it was.  No problem.  :)
****
I did finish all of the George Gently series that was available.  Netflix had all of them through 2010, but not the 2011 season.  Probably not out on DVD yet.  I really enjoyed them.  I like a lot of the British programs.  :)
****
Tonight, if I am up to it, I'm planning on going over to Dagan and Leah's.  Leah would pick me up after work and Dagan would drive me home.  Been a while since we've hung out.  Plus I want to see how many banker boxes we have over there full of the paper making supplies.  Thinking of possibly moving the supplies back here until they're all moved to their new house.  Might be too many boxes.  Must be at least five or six, I figure.  Could be more.
****
Anyways, Leah will check with me after she's done work to see if I am up to leaving home.  Hope so!  :)
****
While I was writing this my Dick Blick order arrived!!  So, I'm off to open the box and take pictures for you.  ;)  Have a good one!!
****
"Another world is not only possible, she is on her way.  On a quiet day, I can hear her breathing."
Arundhati Roy
Posted by Rita at 11:42 AM