I know you can't see it well, but Karma is meowing and panting at the same time. 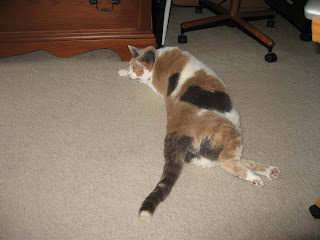 What has her undivided attention and gotten her in such a state that she will leap and chase (too blurry to snap a picture) until... 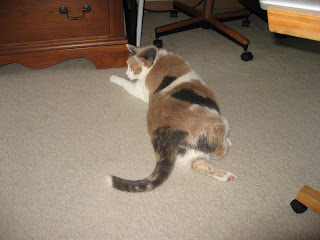 ...she captures her precious prize...bites hard, parks herself, breathing heavy between her teeth, and won't let go? 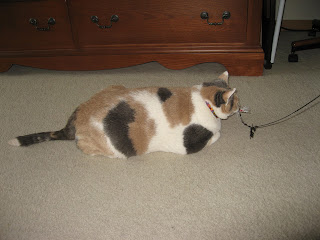 What treasure is this that causes such kittenish excitement and begging as I have probably not observed in several years? 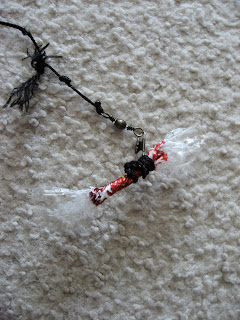 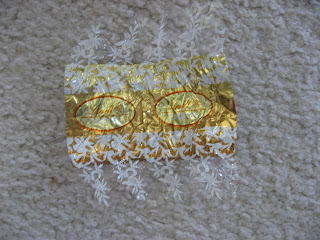 I'd never tasted a truffle before, having thought them some kind of fungus or mushroom, until I heard online that they were chocolates!  Well, then I just had to try them and bought me an assorted sample bag.  (They were all delicious!!)  Little did I know that the wrappers--which make a crinkling noise--would drive Miss Karma bonkers.  Here she is protecting her hoard of wrappers--LOL! 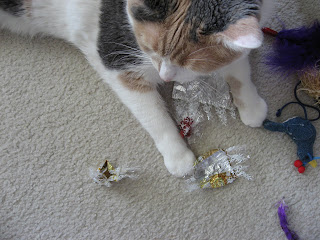 I have to put the string toy up on top of the bookcase by the front door because if you leave Karma alone for two seconds with string she will have bitten through it and be trying to eat pieces as fast as she can.  Took my eyes off her for a bit yesterday and she bit through the string--again!  That's why her string toy has so many knots in it and I have extra string so I can replace the whole string when it gets too short.  She's bitten two or three of Dagan's shoes laces into pieces over the years.  Yes, Miss Karma has a string fetish, that's for sure.  And, at least for now, she has a Lindt chocolate wrapper fetish, too.  ;)
****
I worked on the zendala some more on Tuesday. 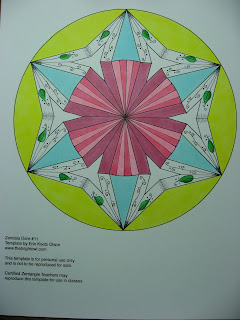 Wanted something softer to contrast the pink abstract flower shape in the center, so I added some leaves and such. 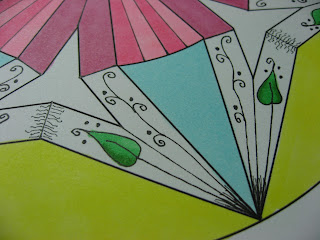 Got this far before Dagan and Leah came last night. 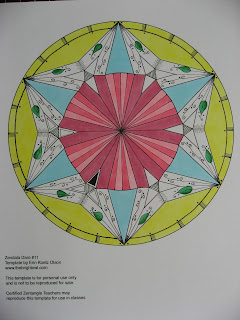 We never did Sacred Circle last night, either.  Leah came later--with food from A&W/Long John Silver's.  We did phone and computer updates--gabbed a lot--and they put down some of the leftover velcro for me on that far end of the porch to cover the gap in the carpeting.  It was already getting late and we like to have 2-3 hours...so we postponed again to try for this coming Saturday night.  You just don't want to rush Sacred Circle, you know?
****
This morning I went to take a picture and Karma immediately noticed the velcro strip.  As you can see, the gap wasn't the full length, so it ends there by the padded chair. 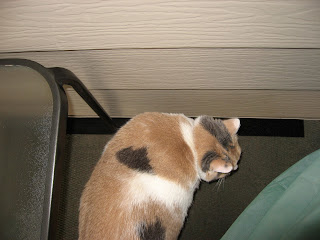 Karma immediately tried to paw it up.  Good thing she doesn't have claws and this is industrial strength velcro because she was over there working on it for some time.  Too hot to keep at it for long, though--LOL! 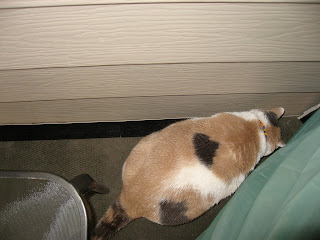 Anyways, I finished up this morning so that I can enter my zendala! 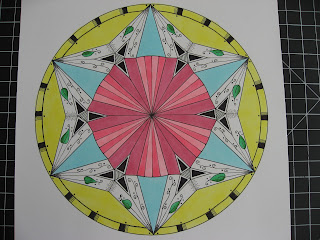 I used a black LePen for the triangles and I should have used a Micron.  The LePen was tending to bleed more on the cardstock and was harder to control for crisp edges.  Now I know.  It was a rich, dark black, though, so I added the black squares around the outer edge, too, for balance. 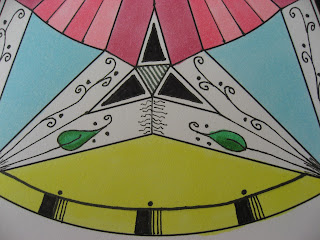 I could have added more, but I tend to like the contrast between empty areas and filled areas.
****
Anyways, that's my contribution to The Bright Owl's Zendala Dare for this week.  You can click on the link and see what other people have done with this week's template, too, if you'd like.  They're always so different!
****
Today I'm off to work on something "garden" for the Artist's Play Room challenge this week.  It's supposed to be around 90 for the next several days so I am staying inside where it's cool.  Karma's out soaking up the heat, silly cat.
****
Have a great day!  :):)
****
"Intuition will tell the thinking mind where to look next."
Jonas Salk
Posted by Rita at 11:27 AM