This is what it has looked like outside here for days. Gray--with a mist of rain that would come and go... 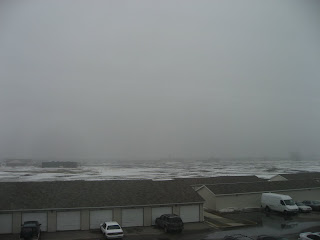 ...and has been steadily melting the snow. (What a mess!) 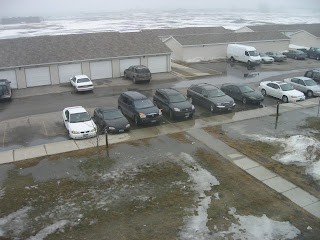 The big dirty snow pile that was taller than the garages is down to half the size. 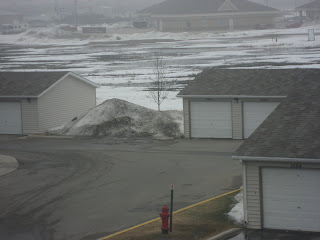 Spring has been desperately trying to rear its head. But they say we have more cold and snow and ice on the way this week. Once we've had this much melting, tho, we know whatever is still in store can't last all that long. ;)
****
Still good soup weather. Made some more of the chickpea and spinach soup this weekend. Delish! 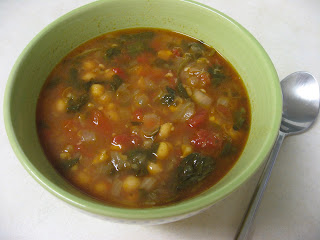 And I got my first birthday card early!
From Wales!! 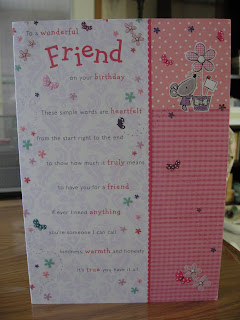 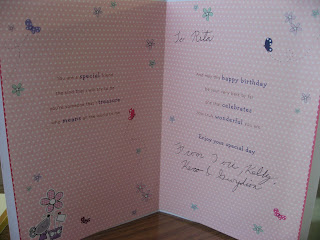 What a delightful surprise!! I send early too when I am sending internationally. You never really know how long it can take to get there. It arrived, Tori! Thanks so much for thinking of me!! :):)
****
I will end with sheer silliness. I had Leah pick me up a new shower curtain liner and finally got around to hooking it up yesterday. Karma was sleeping at the time, but later in the evening she sat in the bathroom and cried and yowled until I went in to see what was the matter. She wanted to get into the bathtub--something she normally has zero interest in. Apparently she could smell the new shower curtain or something? I pulled it back so she could jump in and check it out.
****
Well, she continued carrying on in there for the longest time! I thought she'd get bored, but she was jumping around and crying and yowling like a crazy person. I don't know if the fascination was because this one was clear or longer or made a noise? Or maybe she was just enjoying the echo of her own voice? The mysteries of the Karma mind. Of course, as soon as I got the camera and she could hear me creeping up in the hallway...silence. LOL!
And so the week begins!
Apparently I do not have a sound mind. ROFL!!! :):)
****
"The sound body is the product of the sound mind."
George Bernard Shaw
Posted by Rita at 5:00 PM