Terrible weather! Last night within one hour--besides the unrelenting wind gusts--we had rain, sleet that quickly turned into little beads (like miniature hail), thunder, lightning, then snow, with a little more thunder and lightning. They closed Interstate 94 from Fargo to Bismarck and advised no travel. You know it is really bad when they pull the plows off the roads. I took some pictures.
****
This was about 20 minutes after the sleet had turned hard... 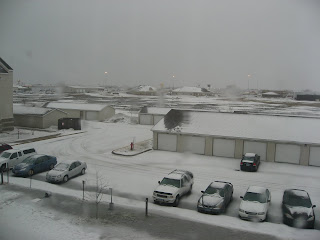 ...and already there was a white covering over everything that had been dry (parking lot and sidewalks, etc). 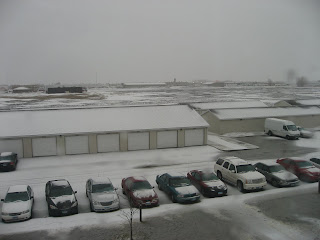 We got a thick layer of the sleet/hail that turned into snow. All night (yes my hours are flipped again) the wind was consistently violent and occasionally loud enough to startle the both of us.
****
Note: I also discovered during the night that my Preppy pens cannot be used as eyedropper pens without the adaptations. Bummer! They started leaking where you screw them together. :( So I will order the parts I need in April to adapt those two pens. Live and learn, right? They do sell actual converters for them, too, but I am hooked! Eyedropper pens are new to me--but I love them!! You can get so much more ink in them that way compared to using a converter. I'll remember that when ordering more Preppy pens. :)
****
You can see the evidence of Karma's very quick excursion onto the porch in the dark last night. She was quite shocked at the arbitrary return of cold and snow... 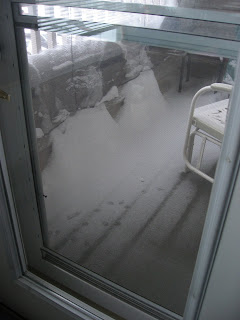 ...and came racing in. But she still had her wits about her enough to realize the snow was sticky enough for a quick turn around to eat her footprints off the carpet. ;) 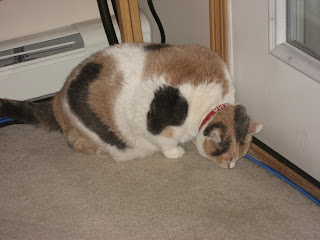 Looked a little different out there this morning. You can see the snow drifts halfway up the garage doors. 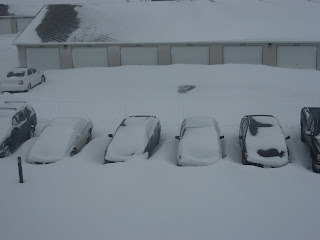 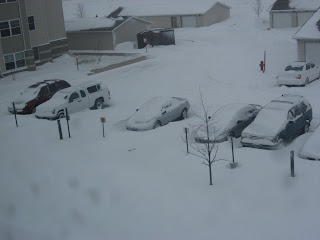 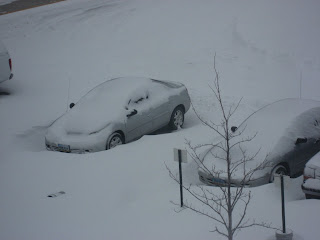 ...but when you have that ferocious wind... 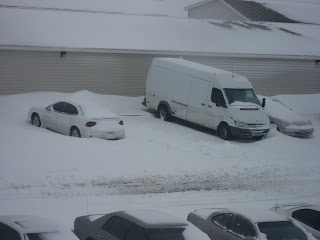 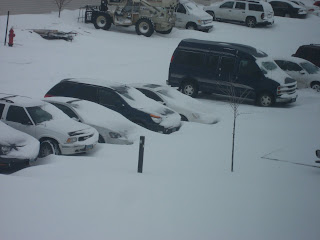 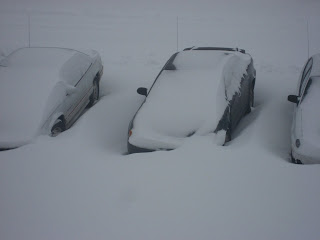 I tried to get a picture of how this giant drift formed down the length of the yard. I hope you can see it? You can always click on the picture to "embiggen" it, as I read on a blog somewhere--giggle! 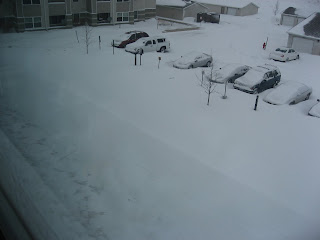 That long drift has to be at least four feet high, I'd guess. Maybe higher? It looks taller than the cars in the parking lot, but it's hard to tell from up here--perspective and all that. It is sure awesome cool, tho! The wind was cruising along the building all night and doing some crazy stuff. Sometimes it sounded like it was trying to force the roof right off sometimes! So the drift didn't push up against the building and sits several feet away with such a nice crisp long edge to it. How did the wind manage something that uniform when it sounded so erratic? It's as much a mystery to me as Miss Karma's mind. LOL!
****
Anyways, the worst part of all this is that thick layer of ice under the snow. People were having a very hard time getting wheels to move last night. I imagine the plows will be back out on the roads this morning and they'll plow and sand and all that, so it will be better soon. The snow hasn't actually stopped yet, but it seems to be letting up and taper off by this afternoon. It's just a general mess up here. Other areas were getting winter storms, too. I hope everyone is warm and safe. Just wanted to pop in and say hi. :)
****
You can't really sail in a snowstorm, but... LOL!
****
"I am not afraid of storms, for I am learning how to sail my ship."
Louisa May Alcott
Posted by Rita at 7:59 AM