Dagan and Leah came over after work and we ate, but never did get around to doing Sacred Circle. They were tired and wanted to leave early, so I went to my list of techie requests. Turned out they still didn't leave early--hehe! Three computers with minor issues and a chatty mom can really be a drag, eh? LOL!
****
Karma actually stayed out in the room for most of the time they were here until she finally hid under the end table. We always wonder if she is going to change and become more sociable. Evidence more of our optimism than Karma's ability to change. :)
****
Dagan had been sitting in my little lounger and after they left I went to sit down and the foot thingie got jammed part way up. I got out and managed to pull and jiggle it up and back down. Tried again--same thing. Harder to get it back down again the second time. So, I left it and called Leah (our Tool Girl). Just had to tease Dagan about breaking my chair, because he has the magic touch with computers--hehe! They're going to stop by after work tonight.
****
Seriously, tho--this chair of mine is 14 years old and I've had troubles with the foot lever a couple other times in the last few years but Leah flipped it over and was able to fix it. So it wasn't Dagan--LOL! We're hoping she can work her tool magic again.
****
So, in the meantime--I decided to use the burgundy footstool--which is from the broken chair in the garage--and I've been using with the glider rocker (Karma's chair). Yes, I have a hodgepodge of furniture--hehe! Anyways, this plan did not work well. Moving the footstool instantly thrust it to the top of the Karma interest scale--ROFL! 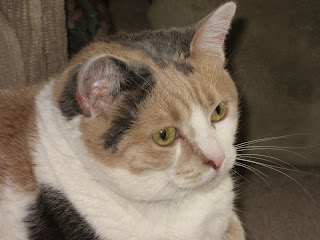 Karma is used to climbing up on my lounger and curling up between and across my legs. Well, once she took over the footstool... 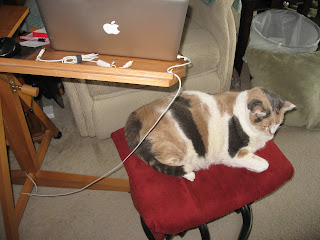 ...there was no room left for my feet! She doesn't understand what the problem is. I finally gave her a ride on the footstool back over by the glider rocker. She hasn't relinquished possession yet. Snoring softly at the moment, as a matter of fact. ;)
****
I wanted to tell you about a movie I watched a couple days ago:
Get Low.
I loved this movie!
There's a trailer you can watch on this imdb link.
http://www.imdb.com/title/tt1194263/
****
Oscar winners Robert Duvall and Sissy Spacek team up to tell the true story of irascible Felix Bush, a backwoods Tennessee loner who planned his funeral in 1938 while he was still around to attend -- and enjoy -- the proceedings. Director Aaron Schneider's deft blend of dark humor and poignancy also stars Bill Murray as Frank Quinn, the huckster owner of a failing funeral home, and Lucas Black as his dubious assistant.
****
I know everybody has different tastes in movies. But if you like quieter, slowly unfolding, character driven movies with great acting and subtle humor, then you will absolutely love this movie! It is "based on" a true story, so it shouldn't have said "true story" as it does in this Netflix description (watched all the bonus material). That Lucas Black is a fine young actor. Watched him in several movies since he was just a kid. And Duvall...what can I say. Just had to tell you how much I enjoyed this one. :)
****
Anyways, still one below zero up here in Fargo. Cloudy, white-gray, winter day. I'm going to order groceries for delivery tomorrow. I'm still on days. Life is good! :):)
****
"Heaven and earth are threads from one loom."
Shaker proverb
Posted by Rita at 10:30 AM