These were the last pictures I had of Karma sprawled on the porch on those glorious three fall days... 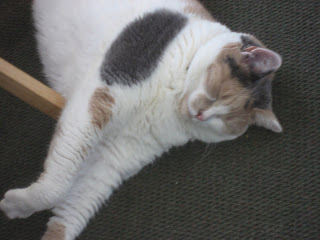 ...before the frost warnings... 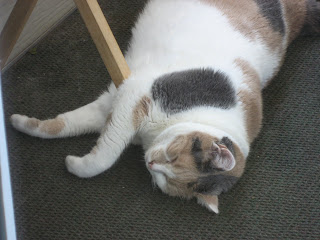 ...and the chilly 50 degree days that have kept her indoors the past three days. 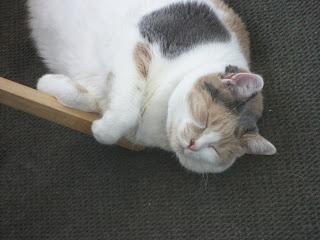 In fact, since I like it chilly for sleeping and actually have had the window open with the fan on low, Karma refuses to sleep with me and has been snoozing inside the big box in her cat bed. I even covered it with a throw so Karma has to crawl her way under (makes it even more interesting if it looks like maybe she's not supposed to be in there) so that she really feels like she's in her own Sabertooth Tiger cave as Iggy suggested--LOL! She's nice and warm, anyways, while I am snuggled deep under layers in my chilly, chilly bedroom. ;) 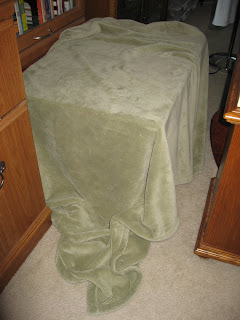 In fact, it has gotten so cold that I have had to turn the fan off during the night the last two nights. 20s. Brrr! Nice sleeping weather, tho!
****
I had a small Amazon order arrive yesterday. The Dayrunner on the right is my old one that I have used for maybe 16-18 years (my memory isn't what it used to be). I searched online to find a new one that would use the same paper with the same goofy six holes. Took a while, but the one on the left is the new zippered version. They don't list them by the size of the actual runner, but by the size of the paper you use inside. Strange! Good thing I discovered that at the main website or I would have ordered one way too big! 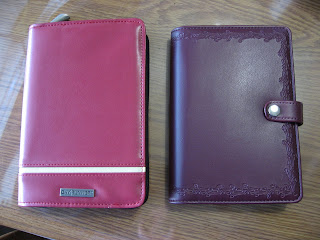 They're that plastic fake leather stuff so after several years they just crack like crazy. As you can see, I've needed a new one for some time--LOL! 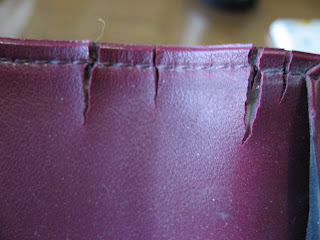 The new one looks nice, but is very stiff and won't lie flat, of course. I need to break it in. I'm sooo happy that all my old refills and pages work just perfectly in here!! This has been my address book for decades, so I had a lot of spare sheets I had bought up for it. 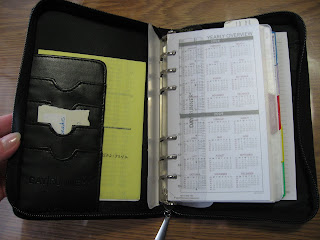 And I also purchased one of the Peter Pauper Press journals. This one is called "Yellow Flowers"--no surprise--hehe! Anyways, this company makes tons of these! All kinds of pretty covers to choose from, 5" X 7", elastic band closure, lined, and have a back pocket. Naturally, I've wanted to test the paper. 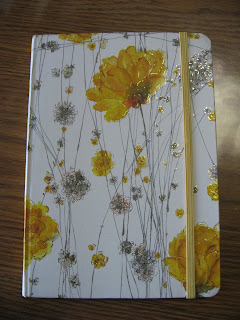 I took the page from the backside and it didn't cut out well. The paper was soft and tore unevenly, so I wasn't hopeful. 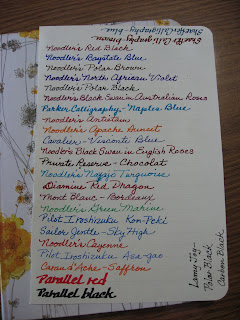 But, it wasn't as bad as I expected, actually. There was bleed-thru with the Parallel Pens and a couple others, but on the whole not nearly as much as I thought there would be. Did shadow, but with certain inks, it could be usable for fountain pens. Probably best with gel, ball point, roller ball, etc, though. I think I may have to experiment some more. ;) 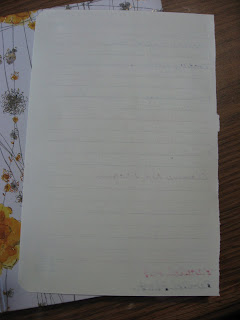 Hey, it's not Clairefontaine. But these are pretty, have a lot of variety, and run $8.99 most places. This one has bits of golden shimmer on the flowers. 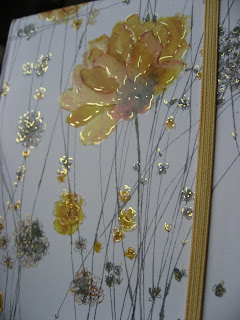 Peter Pauper Press has been around since 1928. They also make stationery, other journals, cards, calendars--well, you can see in the link. I've just been looking at them for a long time because they're pretty cute--LOL! Now I have a much better idea.
****
I must have twisted my knee on Wednesday when we were doing the shelves. Bummer. It's sore and swollen, so I am waiting for it to go down before I will try tackling the organizing. Meanwhile, I watched the newest version of Jane Eyre yesterday and have Meek's Cutoff to watch today...and letters to respond to...and Karma to giggle at...and drying herbs to google (no I haven't done that yet-sigh). Supposed to be in the 60s tomorrow and low 70s on Sunday...and only in the 40s during the night, so things are looking up for a nice, normal fall. ;)
****
Have a really special weekend! :):)
****
(I like this quote because it gives you hope to always keep trying.)
****
"Even if our efforts of attention seem for years to be producing no result, one day a light that is in exact proportion to them will flood the soul."
Simone Weil
Posted by Rita at 1:07 PM