Yesterday's dawn. Was a cloudy day with a little rain. May have been more than I know since I slept a lot. 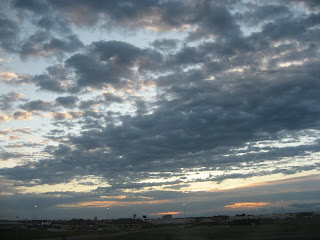 I was sooo tired (chronic fatigue is a b*tch) that I fell asleep in my chair for three hours in the afternoon. I thought for sure this would goof up my hours, but I was still back in bed and slept the same hours I have for the past three nights now--7:30pm till 2:30am. Maybe today I won't be such a zombie? LOL!
****
Was a quiet day. Karma was feeling lazy, too, and used her paw with her treat egg while laying down instead of walking it all over with her forehead. 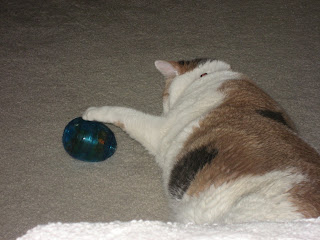 She was sawing logs on the dark day, too. 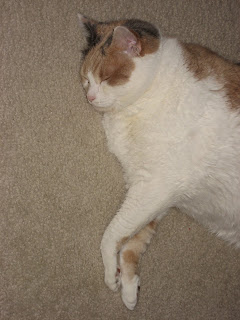 I was excited to see that my Ink Drop came before the long weekend! This is the one year anniversary of The Goulet Pen Company's Ink Drop, so they added a surprise in the package this month! A little Clairfontaine notebook--whoohoo! You know I am a new fan and how much I appreciate this french paper with fountain pens. Also a new fan of Exacompta (my new journal--also french paper) and I want to try Rhodia paper because I've heard how nice that also is with fountain pens. Happiness is good paper--LOL! 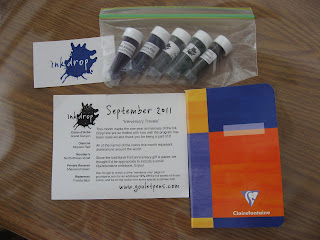 What a wonderful treat! And I only have one of these sample inks, so I have four more to try. Well, more than four--have several sample vials from the past couple months. Only have so many pens--LOL!
****
I'm not sure if you have heard of Story Corps or seen any of their animated videos, but I just love them!! The newest one is Miss Devine.
My favorite one so far is Danny and Annie.

****
They also have a lot of audio interviews. I haven't heard them all, but I am fascinated by people's stories in their own words. They are in the process of trying to do an interview on every one of the people who died in 9-11. Gotta love public radio! (And, of course, public TV--which is where I first saw Dannie and Annie!)
****
Okay...movies!!
I've seen a few memorable ones in the past week or so. First of all I watched a documentary that Caroline told me she couldn't believe was real on Instant Netflix called The Wild and Wonderful Whites of West Virginia. Not realizing that this was the documentary sequel to White Lightnin', which was also on the Instant Netflix list--so I had to watch that one, too.
****
They made the movie White Lightnin' based on Jesco White's traumatic life--with actors--won awards. Then for The Wild and Wonderful Whites of West Virginia a documentary film crew spent a year with the actual White family and you get to meet the real Jesco White and his kin. It is an entire clan lifestyle where they are up against it from birth. Hard to describe. So sad. You have to see it to believe it. Broke my heart.
****
Another one I really liked that I rented from Netflix was called Goodnight, Mister Tom. A touching movie, without being overly sentimental, about a young boy evacuated from London to the country in WWI where he stayed with Mister Tom.
****
Snow Cake with Signorney Weaver and Alan Rickman is another one of those movies I can't believe I never heard anything about. I do so love these smaller independent films. Unique, unexpected, slowly unfolding, memorable performances.
****
The Interpreter with Nicole Kidman and Sean Penn was really good, too. Not as black and white as the trailer and description. Had more levels to it and left you wondering until the end.
****
Two Weeks with Sally Field is the most realistic movie I've ever seen about a mother dying without becoming maudlin or trite or even overly depressing--and will probably often make you laugh, odd as that sounds. Probably because it was written by someone who had lived through the experience. Another movie I hadn't heard about. (I love cruising the Netflix lists--LOL!)
****
The movie Yesterday is a movie that has left me thinking about unconditional love and forgiveness long after I watched it. Profound.
****
To round off my eclectic list, I started watching Dexter (Season 5-the first DVD arrived) and have been watching (instant) episodes of Ancient Aliens. Both fascinating for completely different reason--LOLOL!
****
I never like to tell too much if people want to see them, but you can check the links for more information and some of them have trailers you can watch.
****
There. I am caught up on the movies I wanted to mention. :)
[Note: I have no idea why all the links in this post turned out two different colors?]
****
Today is supposed to be a sunny day in the mid 60s! Despite the 83% humidity, I've had the bedroom window and the porch door open and will just put up with the dampness and feeling more stiff and achy. Just too dang nice to have it cool out!!!
****
Happy, happy Sunday! :):)
****
"Most of us look at our ideals, say how far we are from them, and get depressed. But it is heroic simply to say, 'Here are my ideals,' state them before the world, and then spend the rest of your life trying to live up to them."
Keshaven Nair
Posted by Rita at 4:01 AM