Since my 27 hour stint of being awake, I've been going to bed at around 7:30pm and waking up around 2:30am...wishing I had slept longer--hehe! But this is closer to regular hours and I'm happy with that. This is what I saw close to dawn through the porch door--LOL! Karma lounging up on her TV tray "observing" me. Karma's glowing eyes looked rather spooky-Halloweenish. ;) 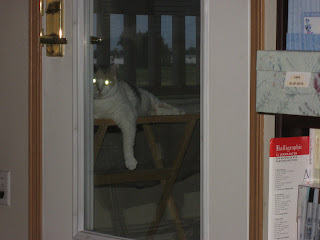 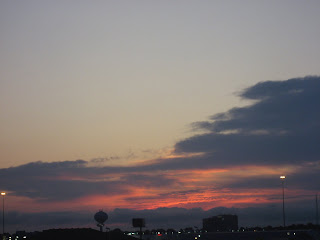 As I said, can't lay anything down on the floor. I forget what these big socks with the rubber on the bottoms are called, but they're like slipper socks. 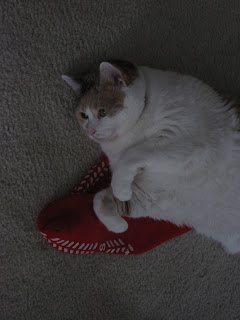 The sun did come up and the day was looking right beautiful. The swallows were having a wind party!! I think the recent batch of young ones were testing their new skills with joyous abandon...swooping and diving like small jet airplanes. Karma was in seventh heaven! 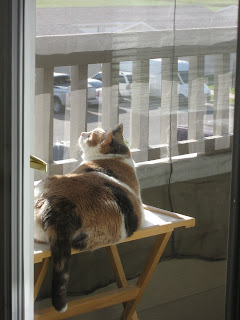 I decided to take a couple pictures of the blue sky and the predicted possible rain clouds rolling in... 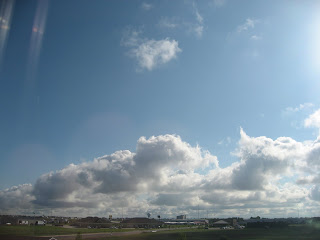 ...the sun was coming out from behind this big cloud and I thought to myself--I've never tried to turn the camera taller for a sky shot--so I did. And I just happened to catch.... 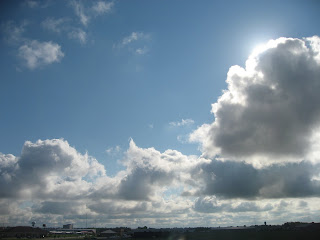 ....two swallows!!!
They seemed to deliberately dart up in front of me to make it into the shot while I was standing in the window!!! Like they were saying hello. :) 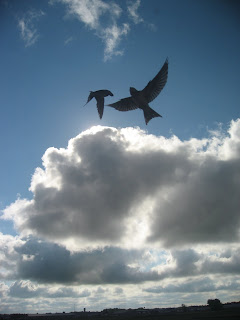 Awesome! It was a perfect instant. They are soooo fast! I wasn't sure I hadn't imagined it until I checked the picture. Came and went in a flash--and yet their dark silhouettes against the sky aren't even blurry! Happy dance time in Fargo!! Truly, a small miracle. :):) So--greetings to you all from the Fargo swallows!
****
Somebody asked me about the herbs. They are doing well. 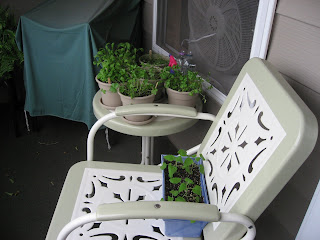 Looks like about time to do some cooking in September--LOL! ;) 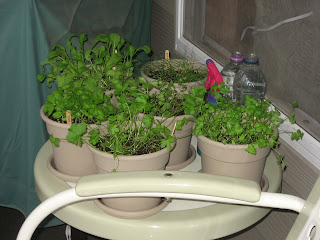 And Karma hasn't bothered the catnip yet. Only because it's on the wiggly metal glider chair she doesn't like, I imagine. 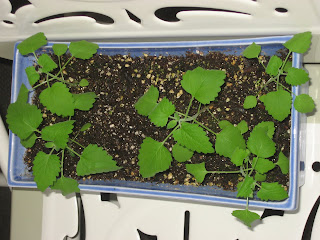 It was a great day for cloud watching. 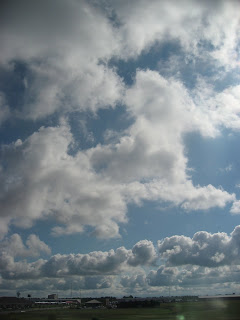 My check was in the bank early because the 3rd fell on a weekend. So I got to order groceries...and Karma got to play in the bags. 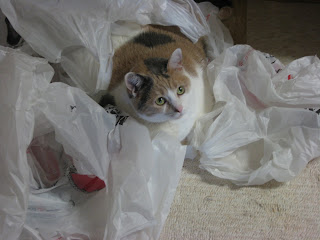 I ordered my paper shelves. The steel pair from Office Max...already got a shipment confirmation email here in the middle of the night. So, they will probably arrive either today or after the holiday on Tuesday. :)
****
Leah said Dagan forgot that they have a ValleyCon meeting this coming Wednesday. Everything got pushed back a week, but the basic plan stands. So far, at least--you know how things are always tentative around here--LOL! ;)
****
I can't remember if I mentioned that my folks didn't stick around this summer and went back to Florida early? My dad has a hip that has been bone on bone for some time and has been getting worse and worse. He is in such pain standing and walking with his walker that a permanent wheelchair life is looming in his immediate future. He'd been trying to get a hip replacement for some time but, since he's 90 (91 in November-but his mom lived to be 104), he got turned down for being too old. He'd gotten a lead on a new surgeon (in Florida where they live) and had his information sent to this new one. The doctor said he did want to see him and they went right back to Florida! :)
****
Dad still had to be checked out by a cardiologist again. (Because it had been close to a year since he'd been checked--and okayed!!--but the last surgeon still turned him down anyways for being too old--duh!--like he didn't know how old he was in the first place!) Well, Dad just got the okay from the cardiologist! He's very happy. Now they meet with this new surgeon again next week and Dad hopes to have a date for surgery maybe in September. Wants to be able to walk on his own again and be free of the horrendous pain.
****
Love you, Dad!! :):)
****
Funny how sometimes I have nothing to talk about and then I have too much--LOL! I still have a 7 things award from Dee to do (still thinking) and I have some movies to mention, but this is long enough for me today. So, I am going to go start Dexter--Season Five! Those of you in the US who have plans for the long holiday weekend--I hope you have good weather and good times! Same goes for everybody else--holiday or not. ;)
****
"When we do the best we can, we never know what miracle is wrought in our life, or in the life of another."
Helen Keller
Posted by Rita at 3:05 AM

What an amazing shot!!! I almost never get cool shots like that. I'm satisfied if it's in focus, lol!

Love Karma - she's such a character!!!

I'm glad you got your things ordered!

I hope your Dad gets his surgery!!! Being in pain is not living.

I am sorry to learn of your dad's continuing pain. But a hip replacement is a big deal, no matter how old a person is, so I am of two minds about that.

Jeannie--Yes, it was a fantastic surprise to see the swallows!
I'm happy to know the organizing shall begin soon! :)

Djan--He definitely knows there's risks, but he decided that he wouldn't want to live the rest of his life going downhill the way he has been the last two years. We're all supporting him in his decision. Swedes are notoriously stubborn--what else can you do? LOL! I'm counting on that stubbornness to pull him thru it all. :) :)

As long as your dad knows the risks of surgery at 90--and I'm sure he does--then it seems to me that the decision is his to make. Pain is so debilitating. It affects us physically, emotionally, spiritually, and mentally.
And so I hope that somehow your father gets relief.

This long weekend I'm going to try to figure that out.
Wish me luck, Rita!

Slipper socks is what we call them over here... I have some in my "fluffy sock" collection, which I wear when it's really cold.

I'm glad your herbs are doing well. Hope you enjoy using them. Don't forget to post any new recipes you try out! :)

You got groceries and Karma got bags... Sounds like a great deal! ;)

Hope the surgeon does help your Dad... That can't be comfortable for him... Hey, if he gets surgery in September, he may be able to walk on his own again by Christmas... Wouldn't that be great?

Great pictures of Karma. I always love seeing her in "action". Love those eyes!

What an amazing shot of those swallows! And you're right...they are in focus. So cool to see. The sun behind the clouds in the one picture was pretty spectacular, too.

I'm glad your Dad got the okay from his cardiologist. I hope the surgery is scheduled soon and all goes well. Pain is something many of us endure, but if you don't have to endure as much, life would be so much easier. I wish him well.

It's very hot and humid here today...chance of thunderstorms today and tomorrow. I'm praying for my friends down on the Gulf Coast. Tropical Storm Lee is packing a nasty punch with heavy rains and winds. It's predicted to hit us by the end of next week with quite a bit of rain...which we don't need. :\

Enjoy watching "Dexter - Season Five" and have a great weekend.

Dee--He does know the risks and it is his decision. They have always led an active life with a lot of road time and traveling. None of the pain pills he tried could touch the sharp pain and he doesn't want to live so doped up that he doesn't know what is going on, either, you know? We all support him.
The swallows were absolutely a gift!! I'm sure you can figure it out. Just read your instructions and keep trying. I need to try to figure out how to scan old photos, too. Even the one I am using for my picture was taken with the camera--LOL! ;)

Tori--I so seldom ever post recipes. If I find anything new and tasty I'll try to remember. ;)
My dad would be thrilled to be walking on his own again by Christmas! It does take a long time in rehab and such, but he knows that. At least that pain should lessen and go away as he gets used to his new hip. :)

AliceKay--You had a wonderful sunrays coming from behind the clouds shot--a few of them!! Gorgeous!
It cooled way down up here!! Really nice!! Just wish that humidity would go down, but I guess we can't have everything. Have a good rest of the holiday weekend. :)

Speaking of recipes... Don't know if you're keeping an eye on my recipe blog, but you may want to. I've put up a couple of new vegetarian recipes with more set up in the near future (set up 1 a day, and there's one for each day for about two more weeks).

I just love Karma! Have a great week Rita. Terah

You got a "still" of the Karma Show on Cat TV!! How cool is that! And such a remarkable picture too! No wonder Karma enjoys the show so much!

Your herbs are really green!! Any ideas what you will be cooking first?

I love the shot of Karma pretending to be a "Bag Kitty" - she could mimic Carol Burnett and be on TV too!

Iggy--The swallows are the best show on CatTV, that's for sure. It's an action packed nature reality show. Karma's favorite channel. ;)
LOL@Karma the "bag lady"!!
Speaking of Carol Burnett, she arrived as Verla Grubs in Pine Valley yesterday. My soap just got much more interesting for a few days. I just love Carol!!! :):)