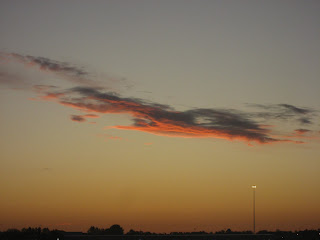 ...turned the clouds orange for a few minutes. 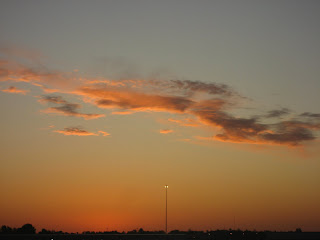 Miss Karma enjoying her tipped out box of toys in the sunshine. 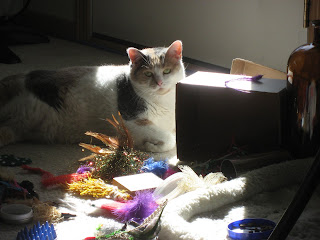 Believe it or not, one of her favorite toys is still the bottom of that clear shower curtain liner that I cut into strips and tied together. Wiggle that plastic anywhere, anytime--beyond resisting to the Karma mind. ;) 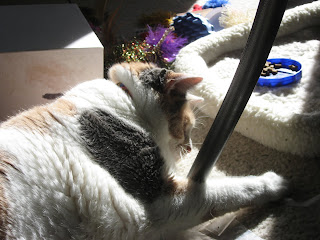 Dagan and Leah were here on Wednesday night. Leah re-potted the fern and the philodendron (which has been doing very poorly). Turns out it wasn't me--tada! I thought I had over-watered it, but I guess it was a combination of the cold and being TOTALLY root bound. I was relieved. I have tried to err on the side of drought and been so careful. Good to know.
****
I don't plan on seeing Dagan and Leah for all of October. Leah's mother's house has to be completely emptied for the closing date that is coming up plus ValleyCon is at the end of October, too, and they're very involved with that event every year. So, they're going to be driving up to her mom's house every weekend until it is cleared out and everything is in storage. During the week they'll be busier, too, because everything they'd normally do on the weekends will have to be done after work during the week. Whew!
****
Me...I'm kind of useless anyways. Been in a fibro flare and my hours are wonky. I had somebody ask me what a fibro flare was like. Well, for me, the best way to describe it is that it's like how you feel when you have a bad case of the flu where you ache all over and feel so weak and generally miserable that you don't want to move. The only thing missing is the vomiting and the fever--LOL! You can feel like this for a day or two...weeks...months...I have heard tell of years. Awk! I have had months of this before, but since I have been in Fargo (2005) and can self-regulate more I have usually had only days or weeks and haven't crossed over into multiple months...knock on wood. This too shall pass.
****
Anyways, I have been trying out some fake dairy products. Why? Well, since I have been vegetarian for over a year now (no meat or fish), I thought maybe I should extend this to dairy. One: because dairy cows are not always treated well, either (even if I buy organic). Two: I have heard so much about how getting rid of dairy can help with things like chronic sinus and other health issues.
****
Okay, so I've tried the fake milk. I say "fake" because there are different kinds of substitute dairy products. Some have soy, some rice, some say non-soy...whatever. "Fake" is shorter (and funnier) than "substitute"--LOL! Plus, I suppose growing up in the upper Midwest where we generally love our "real" milk, cheese, cream, butter.....these are just fake. ;)
****
Anyways, I tried some fake milk. I have a much harder time drinking a glass of that with my meal. The vanilla flavored is better, but the chocolate is the best to me for just plain drinking. Not sure chocolate is healthier, though--hehe! I can use the plain or vanilla flavored on cereal just fine. Maybe I'm getting a little more used to it.
****
I tried some fake (soy blueberry) yogurt...and it wasn't that bad. I tried some fake ice cream and it wasn't as bad as I thought it was going to be--especially the chocolate one, of course. There was a chocolate brownie one that was pretty darn good, actually! ;) They are harder--to scoop and seem to stay quite hard for a longer time in the bowl.
****
Made an actual pizza with some fake mozzarella cheese shreds. Was okay. The fake cheese was kind of dry and didn't have much flavor, but it was edible. I had another brand to try, too. So, one night I decided to use this other brand (Daiya) with some of the extra pizza sauce. 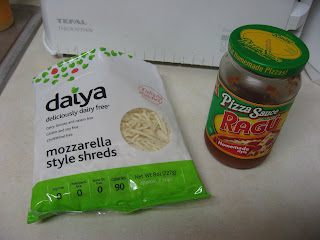 Note that it says "melts and stretches". I was curious because the other stuff wasn't very moist at all. 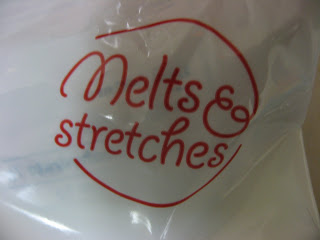 I made a piece of toast, spread some pizza sauce over it, sprinkled the chunky fake mozzarella shreds on top... 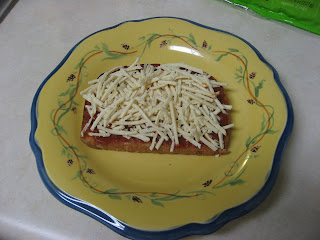 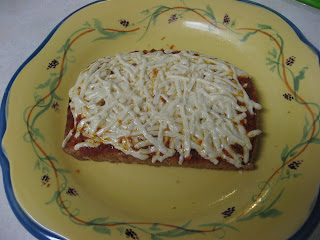 Now, I don't know if you have ever used toast to make a kind of "fake" pizza before, but I have. Never made fake pizza with fake cheese before, though--ROFL! What that package should also have said in big letters is: STICKY!!!
****
That "cheese" stuck to your teeth, both sides of a fork...ROFLMAO!!! Was sooo funny! It didn't taste that bad, but it was a hoot to try to actually eat it! And I still have an actual chuck of this that can be sliced--oh my! ;)
****
Ahh! Trying my fake dairy has been quite interesting. Not sure if I can go totally without, but I might be able to cut way back. I still haven't tried a lot of the various products--like the fake butter, other cheeses, sour cream, cream cheese, etc--and then there are different brands of many items. So, I'm trying something new every month. :)
****
For all the look of rain clouds that have occasionally drifted past... 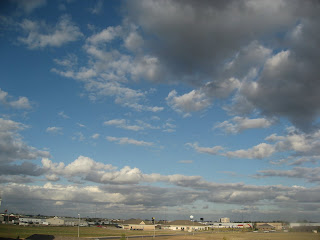 ...we haven't actually had any rain, I don't think. 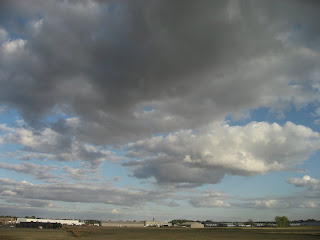 Of course, I have been sleeping during the days a lot so I'm not positive. Been kind of good for nothing the past couple of weeks. Hopefully things will turn around here pretty soon. My knee's better, though. :) Karma's well. Everything will wait for me to get to it around here. Life is good! I'm thankful for whoever invented television--LOL! Karma and I say bye for now from my comfy chair. Hope your weekend is spectacular! :):)
****
"A thankful person is thankful under all circumstances. A complaining soul complains even in paradise."
Baha'u'llah
Posted by Rita at 11:26 PM