Took hours for Karma to make it out of the kitchen once the workmen arrived on the roof. 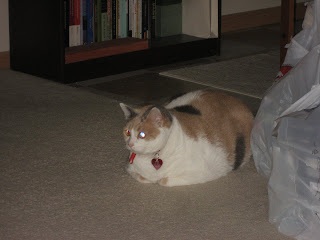 Eventually she made it into the living room, but she was jumpy as the proverbial cat on a hot tin roof--hehe! 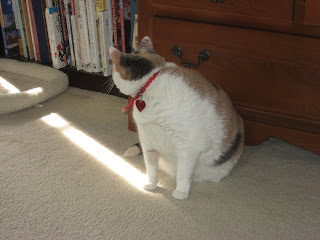 She's been afraid to step foot on the porch--even today when there have been no workmen. This is where the ladder was placed Thursday and Friday--right in front of our porch. So, I didn't blame her one bit. It has been nice and cool outside, but there was no reading on the porch for me, either--hehe! 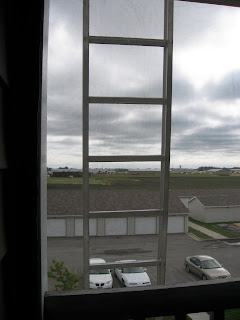 Been quite chaotic with all the trucks and cranes. 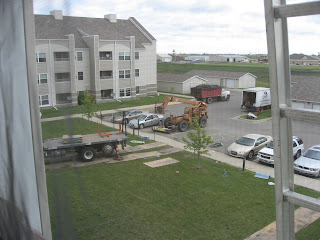 Karma never made it past hiding behind the open porch door and peeking thru the glass. 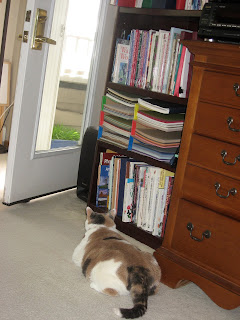 This is as comfortable as she got (when they went to lunch and it had been quiet for a while)--lying down, but with her head raised and ready to jump back up the moment they slammed the packages on the roof or got going with the nail gun. (I caught a few winks after I shot this photo while they were gone to lunch.) 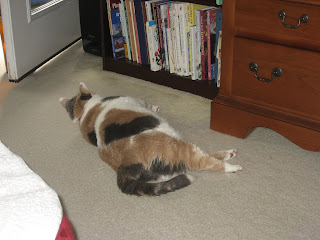 When they left for the day...talk about taking up the parking lot! 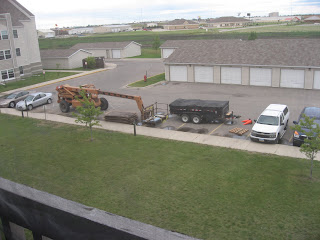 Used up a lot of spaces behind the garages, too. 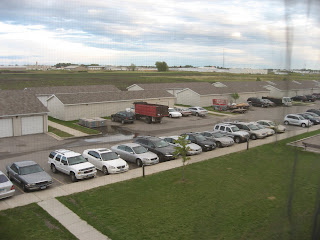 When Caroline and her boyfriend came to pick up the TV and stand on Thursday night they had to park over by the other building. (I told them to move over by the long sidewalk for loading the TV--people do that all the time for loading and unloading stuff.) Her boyfriend was really interested in seeing the computerTVsystem. Nice guy!
****
So--the TV and stand are gone in the bedroom. Karma, whose nerves were on edge from the first day with the workmen, cautiously inspected the empty space... 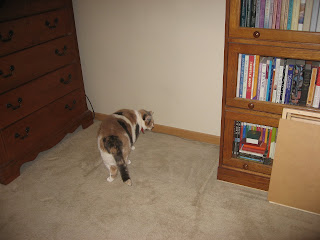 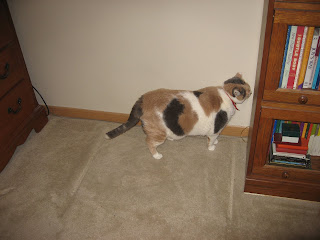 ...and decided she'd better leave and get back to watching for the crazy people outside. 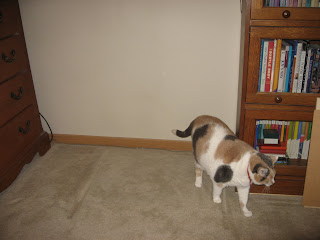 Let's just say that neither Karma or I have had much sleep since Wednesday. Sadly, I barely slept even tho they aren't here today. I'm as bad as Karma (who's still afraid of the porch)--hehe! Zombieland this weekend over here. I haven't even ordered groceries this month yet because I don't want to "have" to be awake at any particular time right now. I'll wait till I can have a better idea when I might be awake and halfway human. ;)
****
Yesterday I had a coffee disaster. The top wasn't pushed all the way in (second time that has happened recently, but I caught it right away last time--it doesn't seem to latch and hold like it used to) and the coffee overflowed all over the counter and down onto the floor and soaked into the kitchen rug...what a mess! Also leaked down from the backside of the sink and into the cupboard under the sink. I have two screwed down pull-out baskets under there (thanks to our tool-girl Leah), so it was difficult for me to get behind them. I did what I could. I can't be on my knees very long (painful and then they swell up--arthritis), so I'll ask Caroline to see what she can do to get the rest when she comes on Tuesday to clean.
****
So, yesterday I washed clothes and the kitchen rugs. At least I had clean sheets to crawl into for the brief amount of time I was able to sleep. :)
****
The new TV has always balked at switching back from the DVD player to the TV. Not sure why. But if I turned off the TV and then turned it back on again, it would work. Not since Friday. *sigh* I can play the VCR and the DVD player, but it won't go back to the TV. Black screen says no signal. And--no--I haven't told Dagan and Leah yet. I'll email them today. Probably something I can do--like manually restart the computer, but I don't know how. I tried unplugging the tuner and plugging that back in, because they showed me how to do that. Nothing.
****
Meanwhile, I am too tired to deal with it and I do have a couple DVDs from Netflix. I have been watching more of Northern Exposure and I have a movie called The Road (another end of society movie, I believe--new one). I have World Without End (almost halfway now!)--but I may be too tired to focus. And I have the laminated bookmarks to mess with that I have avoided since I set them on the craft table. Or the Christmas card parts to start. Never without things to do, of course. Just too tired to move. ;)
****
Right now I am yawning to beat the band as I've been typing this. May have to take a nap here pretty soon. Darn--was hoping to get back on days here soon or the workmen will drive me plum crazy--ROFL! Oh well...you do what you gotta do, right?
****
May your coffee pot not overflow and you have a great Labor Day long weekend for those of you in the United States. And just a plain old wonderful weekend for everybody else. I shouldn't hear clomping, shouting workmen till Tuesday!! :):)
****
"A good heart is better than all the heads in the world."
Edward Bulwer-Lytton
Posted by Rita at 12:31 PM