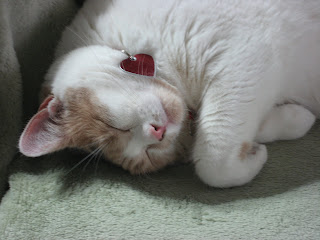 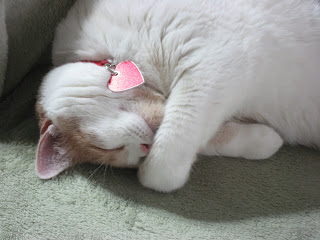 It was dark and looked like rain all day yesterday, so they didn't show up. Same this morning. The sun is attempting to peek between the clouds at the moment, tho. 55 degrees and predicting rain for the next couple of days--so I guess I'll see if they fixed the roof over Karma and my heads, eh? ;)
****
What have I been up to? I finished all the stamping of the backs of the bookmarks. 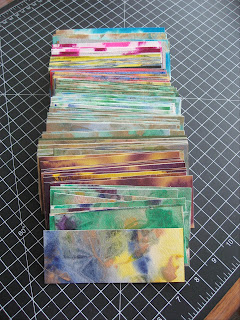 Then I worked on embossing the green fronts of the Christmas cards. 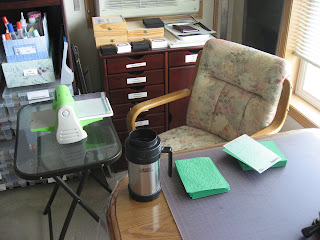 The embossing folder has these funky snowflakes. 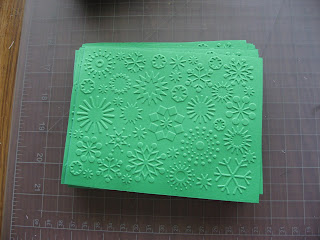 Finished all 120 of them--tada! Then I have to trim them down. I wait until they are embossed to get the best cut for the front. I suppose you could cut them exactly to size first--but this way I know I can cut off the blank strips on the edges, I guess. 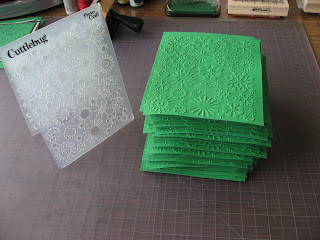 Then I started on some part samples. I wanted to have them done to bring tonight over to Dagan and Leah's. Have samples of just cut and then the cut & embossed versions. Got this far on the weekend. 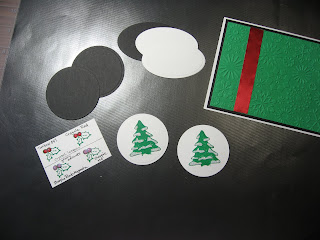 Oh--just wanted to show you how Leah and I can destroy the B plates we use with the Cuttlebug. They come in a set of two. I had purchased an extra set of two when I bought the Cuttlebug--thinking it may have been a foolish thing to do and I'd never need them. HA! Here's one side of this set... 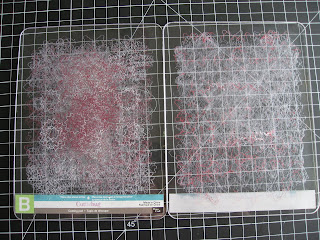 ...and here's the other. These just went into the trash. 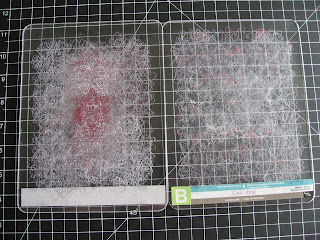 We have ruined three out of the four so far. Just starting to cut on the fourth one. When they get this bad they can't cut as cleanly because you are cutting against a rough surface. You can't say we don't use the heck out of our Cuttlebug--ROFL! Anyways, Leah and I are going to see about ordering some new B-plates and a few other cool items tonight--probably from Amazon this time.
****
The other part of the Christmas card I have been experimenting with is the holly for the inside of the card. I wanted to have red 3-D berries. The previous attempt with the red Stickles--well, they were okay, but they flattened down completely when they dried. So now I tried coloring the two berries with red pens and markers and then adding a clear glaze on top.
****
The top two I used Crystal Lacquer and the bottom two are Glossy Accents. The Glossy Accents is cloudy at first... 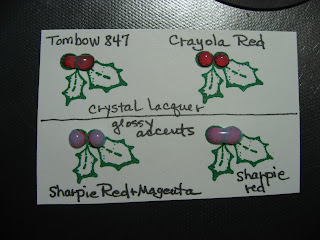 ...but dries clear. For those of you crafters who are interested, there's a big difference between them if you are using a glob like this. 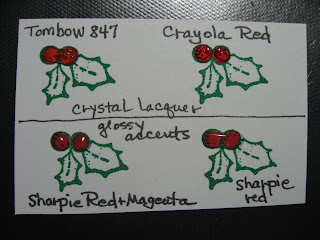 First of all, the Crystal Lacquer had bubbles in them--but that might have been from shaking it to get it started coming out of the bottle. I didn't mind that so much--but they did dry unevenly and had sinking problems, as you can see. 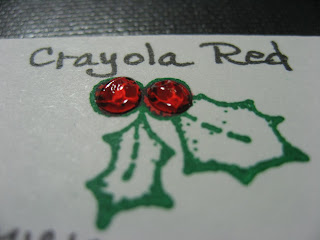 I also learned that it is tricky trying to make separate berries this close together. Almost have to set the globs off to the opposite sides of the berries--but they do look okay that way, I think. The Glossy Accents berries kept their shape and were nice and clear. 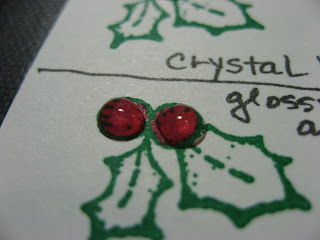 The ones where the berries ran together--well, you can see what happened with the Crystal Lacquer! Sunk right across the center and looks terrible! 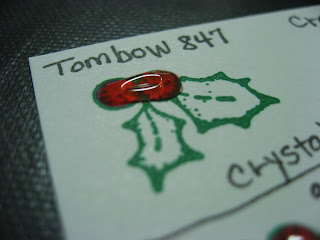 But the Glossy Accents don't look that bad even if the two berry blobs touch and run together. So--there you have it. Glossy Accents is the clear winner. And I wouldn't use the Crystal Lacquer for anything but thin layers, I guess. 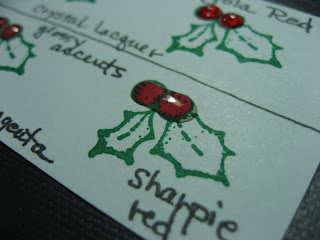 Meanwhile...I tried different markers and Sharpie pens for coloring the berries. Made no apparent difference. So I think I will stick with the red Sharpie. 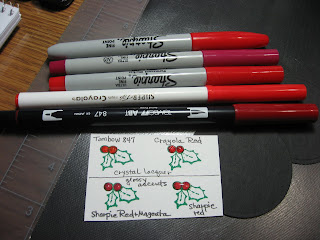 I finished up the samples last night for the outside and inside of the card--so now we can switch around the mock ups to see which we prefer. 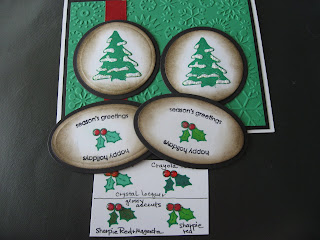 We also have to decide on which green to use for coloring the holly leaves. All done, tho--tada! Final decisions tonight and then I can continue on with the assembly-line. ;)
****
This is the type of prep work we do before we can start on assembly-lining the Christmas and Birthday cards every year. Fun for us--probably boring to the non-crafters--hehe!
****
Aha! Just heard equipment backing up--they were moving some shingles over to the other building. ?? I thought they were done shingling over there. Who knows how these roofers do things. Logic, apparently, has nothing to do with it. The crew doesn't seem to be here--just a couple of guys. Maybe because it still looks like rain? As we say in the Midwest--whatever. ;)
****
Oh--I finally called and made my dentist appointment for re-doing the filling. I guess I didn't need to wait until I felt better--hehe! Usually I can get in within a week or two, but this time...October 21st. So, I have a longer reprieve from the dentist's chair than expected. Nothing hurts--so you will hear no complaints from me--ROFL! ;)
****
Caroline comes this afternoon and I head over to Dagan and Leah's tonight. Let's hope Etsy is working well this time and we get lots of picture sets up tonight so that I can work on the descriptions the rest of the week and finally get some new products up! That's the plan, anyways--hehe! :) :)
****
I hope those of you who so badly need rain and cooler temps will finally get some and I hope my roof doesn't leak when we get some more here pretty soon. I am loving the cooler weather--even if it's damp instead of crispy. ;) Have a good week!!
****
"Live in the present. Do things that need to be done. Do all the good you can each day. The future will unfold."
Peace Pilgrim
Posted by Rita at 9:44 AM