Update on the roof leakage and collection agency.
****
7:30 am water started leaking from the ceiling light fixture in the hallway. I put down an ice cream pail but it wasn't big enough. 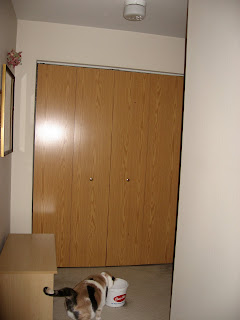 The leaking was too wide. I tried a bucket--ended up using my roasting pan. 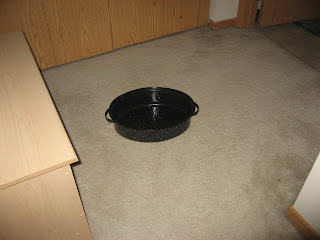 Really creepy to see water dripping off a light fixture! 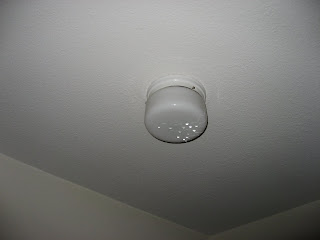 Around 9:30am the other leak returned from the bathroom door frame. 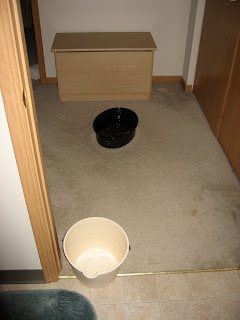 Ended up needing both the bucket and the ice cream pail because it was worse this time. 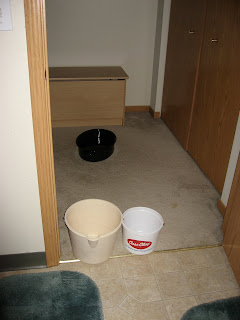 And water ran down from the light switch on the wall in the bathroom. I called the office right away this morning. Not that there was a lot they could do. The maintenance man came this afternoon. He did take the glass dome off the ceiling light for me. (I asked--was completely filled with water, of course.) He told me that I could use the bathroom light if I only touched the plastic switch and not the metal screws. Something about there only being one wire down the wall in the bathroom, but two wires in the ceiling light?? Sorry. I don't plan on using the bathroom light, either. I have a night light in there on a different wall.
****
He said that the roofers haven't come back and finished on the roof on my end of the building yet. And that it should all dry out once they finish. He seemed exhausted and frustrated by this whole ordeal. He can hardly wait for them to be done, also. Poor guy. Everybody bugging him and he can't fix the roof issues. Not his fault. But he did say that if it is nice out--they will come back on Sat or Sun--whenever it quits raining, even if it is the weekend. Good!
****
Also--very early this morning I got a call from the collection agency. I kind of figured I might hear from them. This woman who called...well, she really was an aggressive bitch--pardon my French. They wanted to know all my bills and I decided to try to cooperate with them. So I'm telling her my bills and she informed me that I should immediately cancel my Internet, any cable TV, and I shouldn't have a cell phone. (I'm not sure how they knew I have a cell phone and had the number being as I am on Dagan and Leah's family plan and don't even pay the ten dollars a month myself?) I didn't even get to telling how much I spend on Karma each month or some of my other smaller bills--but she would have told me Karma was a luxury and I should get rid of her, too.
****
She jumped in and informed me that by her calculations (I wasn't even done listing monthly bills!) I had an extra $100 a month, so I needed to pay them $54.00 a month and had to pay them before the 28th of this month. I said I didn't have the money this month. Dripping with sarcasm, she told me I should borrow it from my son. (I had told her one of my bills is I pay Dagan and Leah back every month for what they pick up for me at Target.) She went on about how I was living with all these luxuries when I owed money for medical bills (the whole low-life thing)...that she didn't have Internet...what did I think people did before the Internet, cable TV, and cell phones...on and on.
****
I took down all the information--where to mail, etc.--and she was still ragging on me...still threatening that if they didn't have the money by the 28th that they would take further steps...
I hung up on her.
I guess I was being "uncooperative" like she kept telling me I was.
****
Logically, $54.00 is more reasonable--not the $130-150--whatever it was Merit Care was demanding before--that there's no way in hell I could possibly pay. (I kept trying to get her to go for $30.00.) It doesn't matter that I had been paying for over a year--she kept calling my account "delinquent for over a year"! She just got me so upset...because she was so nasty and sarcastic and condescending. I know that's her job, but how does she sleep at night? I only feel a little guilty for hanging up on her.
****
Anyways, after I calmed down, I remembered that I have the two checks sitting here for Merit Care that I had already deducted from my checking account--for August and September--for $25.00 each! So--even tho I am supposed to write the check out to this new place--I put the two checks to Merit Care and another for the $4.00 (that one written out to the collection agency--who I'm paying from now on, I guess) in an envelope. Let them sort it out.
****
I will try to pay them the $54.00 a month and they had better leave me the hell alone then. Negotiations are over. And I had best check with legal aid or somebody in case I can't always make the full payment. I don't think they have a legal leg to stand on and are just trying to scare me into paying more. I do owe the money and have always made payments, but I would have been more comfortable paying $30.00. At least they have taken a more realistic approach, anyways. The whole thing could have gone so much better if she hadn't been such a mean, nasty woman. Hard to believe she's from Minnesota--hehe! If she really is from Rochester where this company is located. Oh well--enough...
****
Let's just say it wasn't a very good morning.
****
But--since then--it has stopped raining--for now. Boy! If I have ever prayed for rain to stop, it was today! It is still totally gray and looks like more rain--so I'm still praying--and the roof is still dripping a little. That's it from Fargo. Sorry to be such a complainer this past week.
****
I am very aware that you all truly are a luxury in my life. :):)
Posted by Rita at 1:42 PM