Karma's been lounging about this week so far--on her wooden pillow... 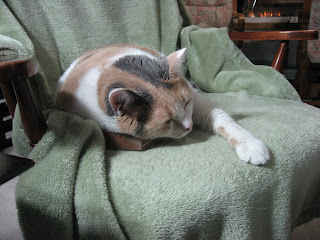 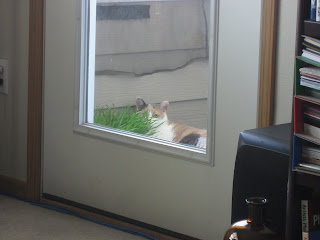 ...and under the plastic stool in the bedroom. (It's like she knows something is amiss with the TV stand out of place--hehe!). 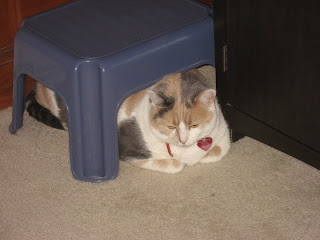 But this was her slinking off into the kitchen this morning. No rest for the wicked today! They started on the roof over our heads at 7:30am! 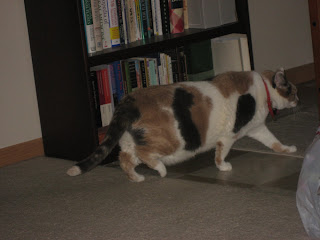 And, wouldn't you know it, my days and nights have been flipped this week--so I was just about ready to go to bed. No such luck. The stomping about and slamming of the nail gun aren't exactly conducive to sound sleep--hehe!
****
So I thought it might be a good time to blog. :) I have so many pictures saved up and stuff to tell you...blogging less often might lead to some pretty long blogs, eh? ;)
****
I made another couple of bookmark sheets--this green and gold one... 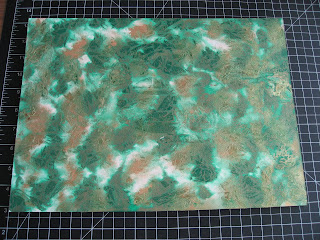 ...and this turquoise and gold one. It's a good thing I love to make these! (I'll explain in a bit.) 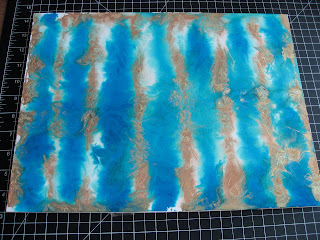 Tuesday I went over to Dagan and Leah's for Craft Night. A little hello from Sammy... 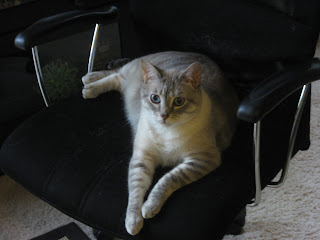 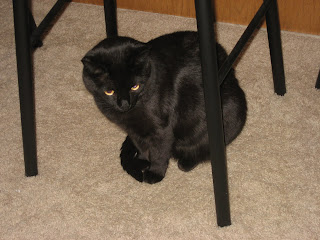 Sorry, Leah! I caught you off guard--hehe! 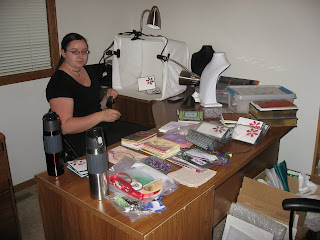 We were getting ready to do a video for YouTube. Leah showed her light box that she put together for taking etsy pictures and how she takes them. So--finally have a new video up after seven months--tada!!! :):)
****
Leah took some pictures this week and next week the plan is that we will work on posting a few things. Kind of alternate back and forth.
****
This is what I brought over for Leah and I to decide on what we want for the Christmas card. 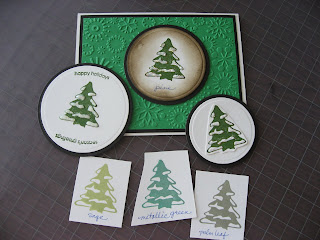 Had samples of the greens (ink pads) that we have for the tree. Trouble is, the green we liked (darker one) doesn't cover a larger surface very well and leaves random white spots. So Leah and I were thinking about trying a juicier pigment ink like Colorbox if they had a nice green. We decided we need more of the diamond Stickles for the snow on the trees so we could keep them all the same, if possible.
****
And Leah had some red ribbon that worked perfectly for a splash of color! The ribbon will be tucked under the green embossed front. 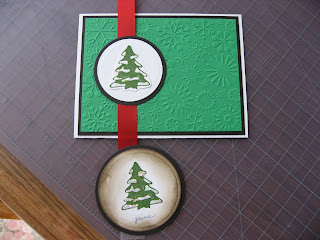 And we both prefer the distressed tree circle. So you have to imagine the smaller circle being distressed--and done better than I did on the sample one (hadn't used the new Tim Holtz tool before).
****
The plan for the inside of the card is to use the two curved sayings in a white oval (or circle if that looks better) on the inside of the card that will also be trimmed out in black. In the center I have a small holly stamp that will be stamped in green, too. Then the red berries will be jazzed up with red Stickles! Of course, I'll show you when I get a sample finished.
****
Leah had an appointment Wednesday with her chiropractor in Moorhead. She picked me up after work and I read in the car while she went in for her appointment. Then we went over to the Office Max in Moorhead and talked to the girl about laminating the bookmarks. She said it was going to take a while (didn't seem to want us around really), so we said we'd go shop for a while and come back.
****
We headed over to K & Krafts. She has the best selection of ink pads in the FM area!
****
OH--little backtrack--I had already called K&K's to see if she had the diamond Stickles and a "pine" refill for the Ancient Page ink pad we have (we'll need it regardless). Nope! Out of both. So I called Hobby Lobby, Michael's, and JoAnn's. Nope. Nobody had the refill or the diamond Stickles. So I called back to K&K's and put in a special order for the refill and 2 diamond Stickles.
****
Anyways, before we had even started shopping the girl from Office Max called Leah's cell phone and said she was having trouble with the bookmarks. Said they were too thick and not sealing right...we said we'd come by to look at what she had done so far after we were done shopping.
****
We found a nice green Colorbox pigment ink pad and refill--and a Christmas Red Stickles! Perfect!! :) Something went right, anyways. 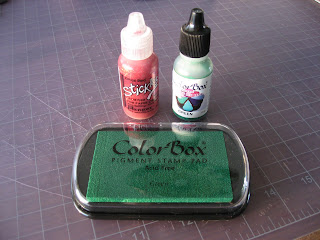 Then off we went back to the Moorhead Office Max. What a disaster!! 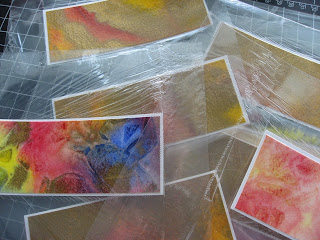 All the ones she had done were ruined.
****
Wrinkles and puckers. 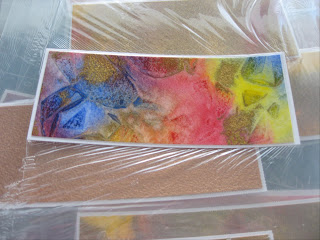 Absolutely cannot sell them. And she had used 34 of them before she quit.
****
We have done this before--about 7 years ago or so. This is the worst job yet! Back then we had to go from the Office Max in Fargo to the one in Moorhead to get better work done. So--we decided to head for Fargo and try our luck over there.
****
At the Fargo Office Max we got a guy who seemed to know what he was talking about. He expected problems because of the thickness. We gave him four bookmarks and he tried setting them farther apart in the laminator.
****
Well, his did look better at first glance, but they were still not usable. 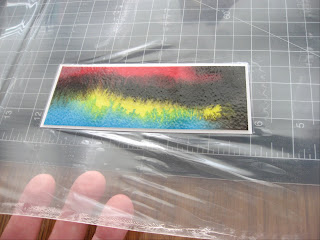 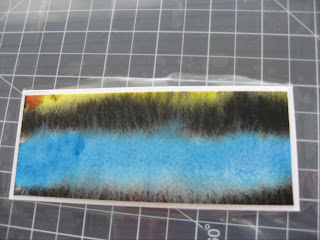 On the way across the river to Fargo Leah and I had discussed some options--like seeing if we can pull the backings off without tearing the watercolor paper--and, if we can, then maybe using gesso on the backside & then stamping them? Seeing if we could buy some bookmark sleeves online and leaving them as they are?
****
At least this guy at the Fargo Office Max came up with a suggestion we hadn't thought of. He wondered if we could make a color copy, trim it, and then laminate it. So we gave him four more bookmarks and he went to town! The copies are really good, as you can see. Can you tell which ones are the originals? 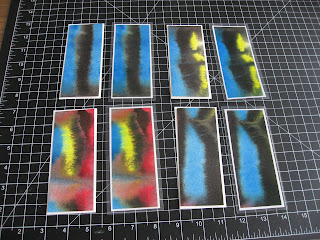 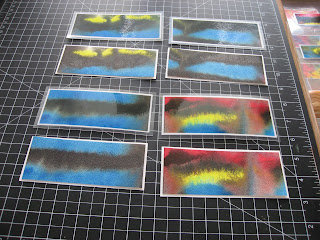 But they were too flimsy for our taste. Very thin! He said there is a heavier laminate that we could use on the thinner paper to make them stiffer. We suggested using cheaper, thinner cardstock for copies and the regular laminate...
***
...well--at least we do have several options to check out. We will figure out what will work best. It is funny that we always said we should have put a backing on the first watercolor bookmarks we made back then (we didn't like the sloppy backs from the ink and paint)...but it turned out to not be a good idea after all--ROFL!! Live and learn, right?
****
Meanwhile--I have been really cutting back online! I quit facebook, flickr, two different writing groups (writing.com and shewrites.com), and even deleted a lot of bookmarked websites. I am streamlining my computer time. :):)
****
Caroline was going to come and pick up the TV and stand with her boyfriend on Monday night. He doesn't get home till after 8:30pm, so it had to be later in the evening--which is okay with me as my days and nights are flipped anyways.
****
Monday night. Rainstorm.
Tuesday I was gone to Dagan and Leah's.
Wednesday night. Rained.
We said we'd try for tonight.
Predicting rain--ROFL!!
But there's no hurry, so it's no big deal. :)
****
That's what I've been doing this week. And the entire time I have been working on this blog it has been very noisy up on the roof. Hey! Wasn't that a song? Up On The Roof...? :)
****
Karma won't be getting much sleep, either, today. It's taken her 2 1/2 hours to make her way into the living room. But she is poised to run at a moments notice. ;)
****
Hope you've been having a great week! That's it for this morning from a very tired me in Fargo. These guys will have to go to lunch, right? ;)
****
"And in the end, it's not the years in your life that count. It's the life in your years."
Abraham Lincoln
Posted by Rita at 8:04 AM