Since I am awake and trying to stay that way (explain later)...thought I'd fill you in on what's been happening up here in Fargo. ;)
****
I went and got the stool to find out where to unplug the TV. (Didn't work, BTW. And Dagan talked me thru restarting the computer on the phone--nope.) Of course, the second I turned my back...Karma had commandeered the stool--hehe! 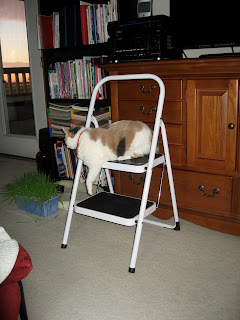 Well, let's see. Since Saturday...
****
I worked on cutting up Christmas card parts Saturday and Sunday... 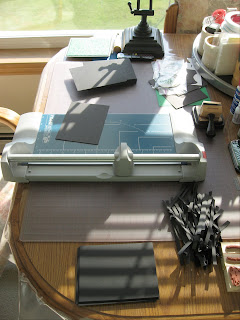 ...and finally roughly cut all the laminated bookmarks apart so I could see if any were salvageable. 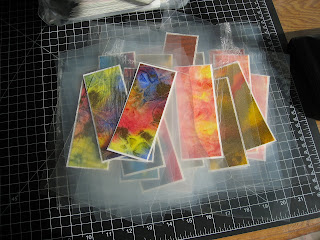 I finally collapsed from lack of sleep on Sunday and slept from 9am-9pm. (Since then--back to an hour at a time here and there--so annoying!) By Monday morning I finished all the six stacks of the card parts for the 120 Christmas cards! (One can get a lot more done without TV--ROFL!) 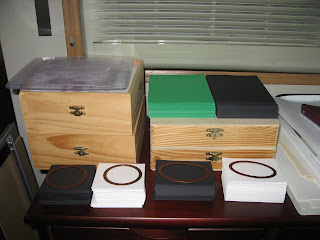 And I cut up the new sheets into bookmarks. 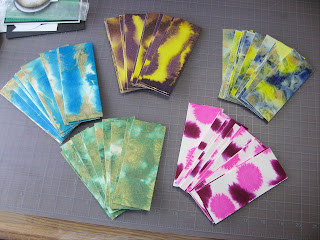 And how many of the 38 Laminated bookmarks were possibly useable? One. Cut way too close to the paper for our liking, but it was sealed. The back is wrinkled, but I'll keep it. If I run my nail across the puckered back it makes a noise that annoys Karma. *she chuckles evilly* ;) 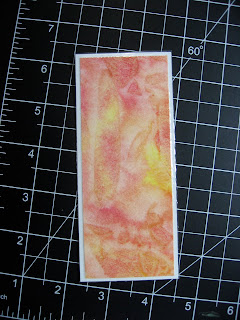 All the rest are wrinkled and/or the lamination is separated. I am keeping the four that were from my favorite batch, tho. Just because they weren't too badly wrinkled and mostly sealed--and--well--I love them regardless. ;)
****
Yesterday I started seeing if I could peel off the backings and save the bookmarks already made and not laminated since they were tacked on with ScorTape. If I slowly tear the backing off... 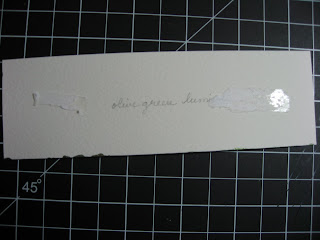 ...and then carefully peel away the tape & paper left on the back of the bookmark (with some the tape has actually peeled free right off the bat and stayed attached to the backing!)... 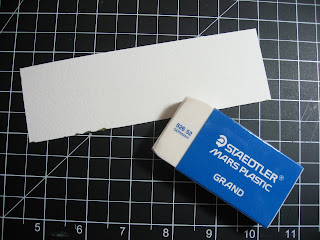 ...then I can take a big white eraser and rub away some of the glue residue and they look just fine!! :) 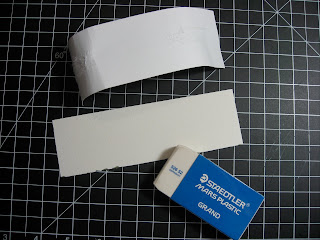 So, I am salvaging as many as I can. 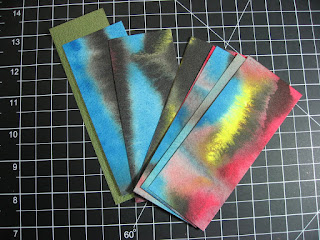 See--the backs look okay. Might be able to stamp on them even. Depending on the glue residue. 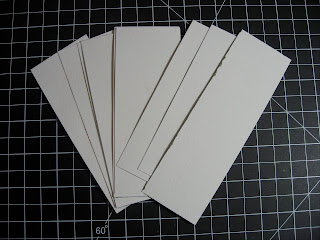 This is the stack I have left to "de-back"--hehe! I'll just do a few a day and keep working at it. (Hard on my bum arm.) Very happy that we can probably save almost all of the rest of them. :):) 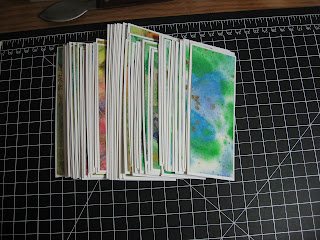 Oh--and at least we didn't have to pay for any of the bad lamination at either Office Max. With the four additional ones we experimented on at the second store, we lost a total of 38. Oh--minus the five misfits I'm keeping, I guess that's 33 then. Barring any bad tearing--should be able to save the rest of them and get them laminated--hopefully--without any problems. :)
****
Dagan and Leah came over yesterday. Dagan got the TV to work!! No more Microsoft updates for me. That is what caused it, believe it or not. Thanks Dagan! He's my computer magic man!! :) :)
****
I showed Dagan and Leah what I had been working on. Made a quick kind of half-sample of what the inside piece is going to look like. White oval with black framing behind it--just like the front circle has. These aren't positioned properly, but it gave Dagan a quick idea with a scrap circle. Going to have holly with words above and below--and some red Stickles on the berries. We all decided that the words should be black, tho. 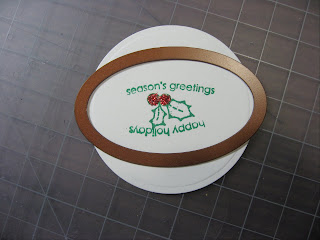 Then I wanted to see if we preferred the distressing before we remove the metal die or after. Did a quick distress job on the sample tree. 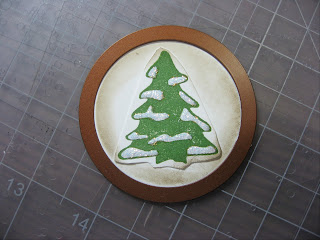 We liked it better without the white ring when we set them on the card. Just as well, makes that step a little less complicated. ;) 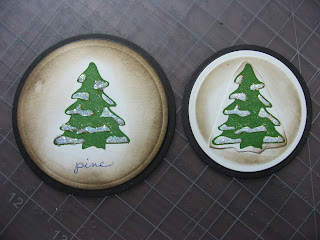 Here's what we will be using for the distressing. Walnut ink and the sponge applicator. Need to practice to keep it lighter. Well, not really--duh! We'll get a lot of practice doing 120 of them--240 counting the insides--won't we?! ROFL!! 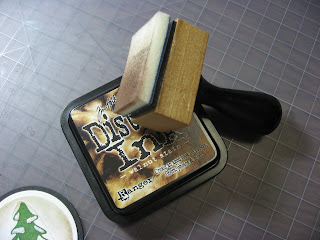 Also ordered a cheap bookcase from Office Max (online) last night. We were all measuring and deciding the options of how to arrange the furniture in the bedroom for the coming bookcase. Dagan and Leah think I (well, it will be them) should move the one dresser over next to the oak bookcase and put the new one on the wall by the window. Easier access to my dresser drawers, that's for sure. But--that is the dresser that I have the little fish tank on. A lot of work to move...so I am going to think about it. They said they could borrow some kind of slider things to put under the dresser so it won't be so difficult to move. They thought we could probably leave the fish tank on it and just lower the water way down. Hummm...?? I'm trying to picture the furniture....
****
Anyways, when Dagan and Leah left yesterday afternoon, I was soooo tired. But not having seen TV for going on four days...I sat and watched a couple of things while I listened to the storm rage.
****
I decide about 6pm to try to sleep, right? Getting ready for bed--go to brush my teeth--and I hear dripping!? Right outside the bathroom door on the carpeting! 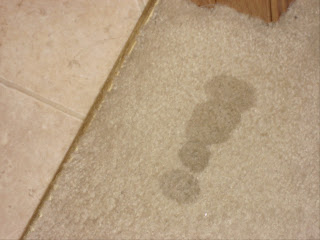 I went and got an empty ice cream pail and put a rag inside to soften the noise and splashing. 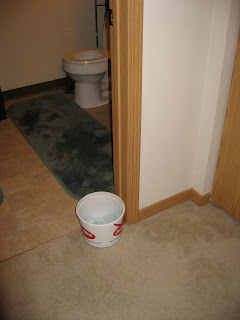 It was coming down right from the door frame here under my angel that sits on the corner of it. 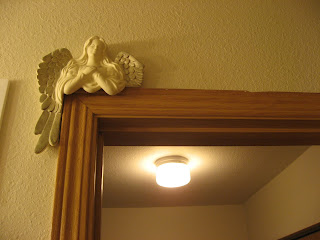 And I noticed that there was water coming down the wall right next to the door there--looked like it was dripping from the light switch!! 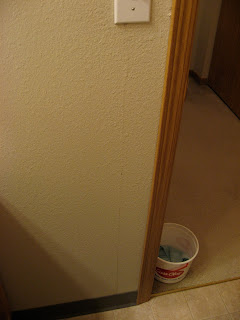 You can hopefully double-click on the pictures to see better.
****
Anyways, I tried a couple of times to lie down during the night--no luck. So--I have been up all night again, but need to stay awake to call the office this morning to tell them.
****
This is the great job they've done on the new shingles?? It never leaked there before? *sigh*
****
Caroline comes to clean this afternoon around 2pm. I might get a short nap or two in. Seems like I can only doze an hour or less lately?? Doubt I will be able to make it over to Dagan and Leah's tonight for Craft Night. :( Maybe we can do it another night this week? I'll have to email them.
****
But, right now--I need to jump in the shower and then call the office. The day is beginning and I just want to go to sleep--hehe! Oh well. At least the sun is trying to peek out this morning.
****
Have a great week! :):)
****
"Our walls of division do not rise all the way to heaven."
Metropolitan Philaret of Moscow
Posted by Rita at 7:46 AM