Karma lolling on her toys. 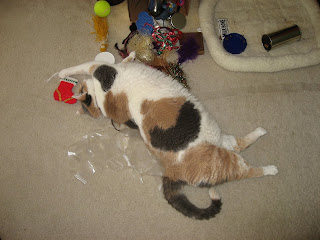 Well, the herbs weren't getting much light way back by the kitchen so far away from the window and I could tell they weren't happy. So I got a large bin cover, to protect my cabinet that sits right behind me at my craft table near the window, and moved them all down there. I decided I needed to relinquish that space to them. I think they are happier. We'll see. (Three of them got trimmed, too, tonight so they may not have liked that at all.) 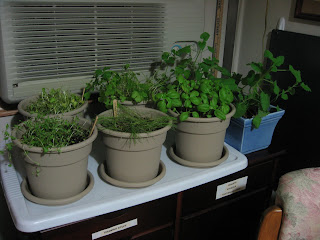 Don't ask me how I got this huge pot up on top of the bookcase!! OMG! 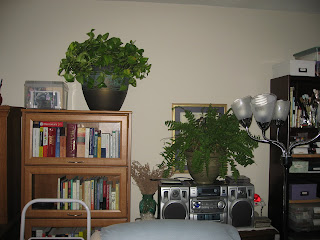 When Leah re-potted the philodendron I had her put it on a TV tray in my bedroom by the window...foolishly thinking I could pull it across the floor away from the window if I wanted to open the window, right? Well it was too heavy for me to pull with one arm. The wooden legs were just trying to bend! So, I placed the step stool under the bookcase in the living room, managed to get the pot up on my side, hauled it one-armed into the living room, got up the steps of the ladder, almost dropped the pot...but just barely managed to kind of hoist/toss it up there--whew! A feeling of accomplishment, I tell you! :) 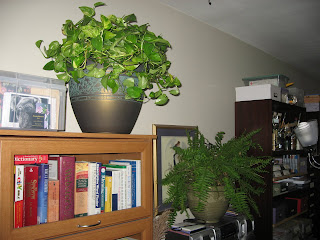 Leah used this metal epoxy to kind of weld together three hooks at the top for the fern that's sitting on top of the boom box. There's another huge hook that is meant to go through the top of those hooks and then the plan was for me to hang the fern up on that ceiling hook after the epoxy cured. But there is no way I can lift this heavy pot filled with wet dirt with one hand at that angle. Maybe after the soil has dried out. We'll see. Eventually it will hang there.
****
Neither of these pots came with hangers, so Leah was converting the pot. I told her the big one for the philodendron was just too large and heavy to attempt to hang. After carrying it...I am positive! LOL! The funny part was Leah got the stiff hooks and epoxied them together so it would (in theory) be easer for me to move by myself. ROFL! The best laid plans, right? I can't even lift the smaller pot with my good arm--LOL! Oh the things that crack me up. ;)
****
Anyways, the only sun I get now in the winter will hit that wall. All the plants are now on the sun wall so they will be as happy as I can make it for them. It's the best I can do. :)
****
Tonight after I woke up I finally made another batch of cabbage soup. Been putting it off because of feeling crummy. But I figured that if I could move plants yesterday I could make soup today (before the celery was totally limp--LOL!). Added some fresh cilantro, chives, and parsley--tada! Oooo....warm soup on a chilly night....ahhh! Perfect! 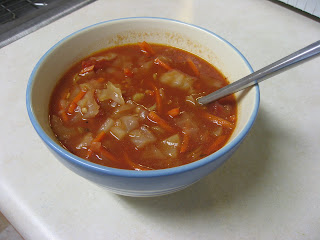 Karma got bored with her saber-toothed tiger cave, apparently, and hadn't used the box for many days. So, I took off the throw (I wanted it to keep warm anyways) and moved the box under the art table. Voila! Instantly interesting! 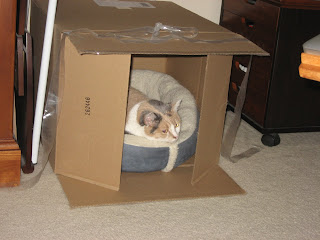 Let's see...I finished watching the last season of Dexter, my favorite serial killer. Now I am in the process of watching last year's Supernatural with the usual interesting angel/devil wars. Also been checking out the new TV season, of course. Glad I can just record so easily now with this computer system. (Is that called tivo-ing?) Can't say anything has stood above the rest so far. Two and a Half Men might be good again. Does anybody have any favorite shows...new or old?
****
We had one hot day (90) and then it cooled off again. You never know from one day to the next if it's going to be in the 70s or the 50s. Was in the 30s again last night. Hey! It's October 1st! They should have the heat working again now for the winter. (I don't think landlords have to legally provide heat until October 1st.) I suppose I should check...later. Been up since 9:30pm and, right now, I am curling up under the throw and going to turn on the TV and veg out for a good long while. ;)
Happy weekend!!
****
"A loving person lives in a loving world. A hostile person lives in a hostile world. Everyone you meet is in your mirror."
Ken Keyes Jr.
Posted by Rita at 4:59 AM