This is the new setup in the living room. The gold chair will be moved to the garage, but for now--Karma thinks I have placed it there strictly so she can have a more comfortable spot to be near me while I am at the computer. 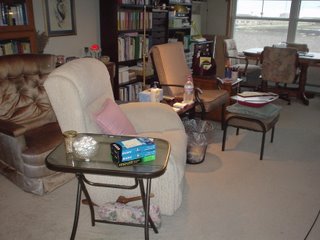 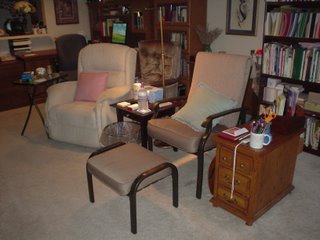 I sometimes put Gracie on her playpen in the bedroom and shut the door. Gracie likes the change of scenery, looking out the bedroom window, and the peace and quiet, I think. Karma often sits outside the door when Gracie is relaxing in there. Karma fell asleep outside in the hallway. I am not sure that she actually misses Gracie--I think the main fascination comes from being shut out. 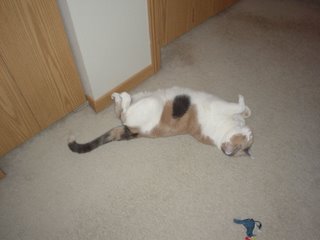 She looks so funny the way she likes to curl up her feet.

I watched a movie tonight about Bobby Darin--Beyond The Sea:

Kevin Spacey directs and stars in this film biography of singer Bobby Darin, a hipster in the Frank Sinatra mold and singer of pop hits such as "Splish Splash" and the titular tune. Darin eventually moved on to performing jazz standards that culminated in his signature gigantic hit, "Mack the Knife." Kate Bosworth plays Darin's wife, the movie star Sandra Dee. John Goodman, Bob Hoskins and Brenda Blethyn co-star.

It was done in a part factual and part musical/fantasy portrayal--which seems fitting for Bobby Darin. I remember all the problems Bobby had with knowing who he was and who the people really were in his life. To me--he did seem to use his career as a sort of escape from reality. I am amazed at how well Kevin Spacey can sing!! I honestly couldn't tell when it was Kevin and when it was Bobby!! You can tell that Kevin Spacey really admired Bobby Darin and this film was a loving homage.