Ah! Another beautiful white baby mushroom! I saved this new one (on the top) in the frig. 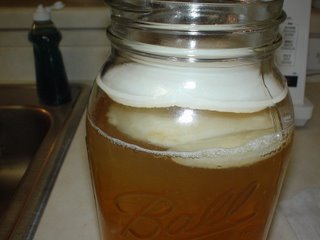 Last time I used Banchu tea and natural turbinado sugar. And did the tea ever taste good this time!! Didn't even have the bite to it that makes me pucker. It's actually delicious! I drank twice as much when I got up today.
I had already put together the tea for this week. I used the Banchu tea and brown sugar this time, so we'll see how that turns out next Friday? 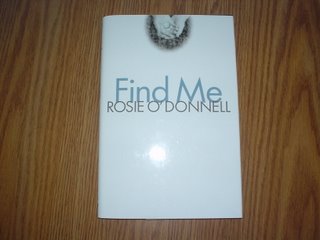 The last two days I read Rosie's book. She's one of those people that you either like her or you don't. I like her. I don't agree with her all the time, but I admire her struggle to just be herself within the craziness of fame. She's just is--take her or leave her. Those are my favorite people--public or private people. (Why I always liked Bette Davis, Katherine Hepburn, Jimmy Stewart--and Oprah, Drew Barrymore...I have an odd list--hehe!) I don't have to agree with them--but I like people who are true to themselves. Of course, just like most of the rest of the world, I tend to like people who think at least partially like I do, better than those who don't--hehe! Just like openess and honesty.

Rosie also has a generosity of soul and a childlike joy that I find refreshing--and she will admit her faults and when she is wrong. To those of you who can't stand her--fine--just don't write to me about it, please. We won't change each other's opinions, anyways.

If my opinion is changed, it will be changed by Rosie. Kind of like Mel Gibson--I used to like him when he was younger, before he got preachy. His recent drunk & nasty--showing his true colors, as they say--was the final straw for me with Mel. He's been on an escalating ego trip for years and he'd have to exhibit a whole lot of genuine humility for a good long time for me to believe he's changed, I guess. Not that he couldn't, of course.

Anyways, for those of you who like Rosie--it's an interesting book. Let's you get a peek into her heart and soul. If you'd like to read it--you can contact me at www.bookcrossing.com --my bookcrossing name is soulcomfort. :)

I watched some movies last night.

Charlie Croker (Mark Walhberg) leads a gang that manages to pull off a major heist and steal a carload of gold stashed in a safe that they've stolen from Charlie's former crony (Ed Norton), who filched it from Charlie in the first place. But can they get away with the heist -- for good? Charlize Theron, Seth Green and Donald Sutherland co-star.

From the director of the Lord of the Rings comes a chilling true-life drama about an obsessive friendship that led to murder. In 1950s New Zealand, introvert Pauline (Melanie Lynskey) befriends self-confident Juliet (Kate Winslet, in her film debut); soon, the two are inseparable, retreating to an imaginary world. Their relationship intensifies in the face of opposition from their families ... opposition that ultimately has bloody consequences.

I thought I had seen the old Italian Job from years ago, but after seeing this version I wasn't sure. I will probably have to see if they have the old movie at Netflix. I don't think this version was meant to be a "remake"--seemed more like it was "based on", you know? But it was good! So many good actors! Fast moving--and the action keeps going till the very end. Oddly, you realize that you are actually just siding with one set of thieves over another-ha! :)

Heavenly Creatures was a very strange movie. It says that it was actually based on a true story. In the beginning it said that the movie was based on the actual diaries of Pauline--one of the two girls in the story--and at the end it tells you what happened to them (arrested, sentenced, etc). The story was quite an odd one--that gradually got creepier and creepier! These two young girls became kind of addicted to each other's company and they hinted at a lesbian connection. It was set between 1952-4, I think, in New Zealand. Pauline and Juliet were both lonely, unhappy girls who had medical issues and were outsiders in school. The parents were trying to split the girls up and the girls concocted the idea to murder Pauline's mother who wouldn't give parental permission for a passport--apparently so that Pauline could run away with Juliet to Hollywood. How they figured that killing one parent would assure her father of signing for a passport, I don't know--but teenagers have strange logic sometimes and these two were extra weird to begin with. Pauline's diaries convicted the both of them. They both lived in this fantasy world half the time--a world they were writing in a novel--with characters they made out of clay--all very strange, but very well done. The girl who played Pauline now plays Rose, the obsessive neighbor of Charlie Harper on 2 1/2 Men. And this was Kate Winslet's first film, too.

I have The Grapes of Wrath to watch today!!

And I am washing clothes and have to go fold... :)