Well, I thought I heard people in the hallways yesterday, but it must have just been people who live here making more noise than usual. The construction company's people never did arrive. Late afternoon I went down to get my mail and saw that the office had posted a notice that the company changed the date to next Monday the 9th to come and fix the windows. I got up early for nothing--but I made up for it last night. Went to bed at 11:30pm and slept till the phone rang at 12:30pm! And I slept well, too! :)
The phone call was from CashWise. The lady wanted to ask me about some substitutions again. I still can't get over that they would bother to call me when I have the "no substitutions" box marked. Same lady--noticed I only order once a month and was worried there were too many things going to be missing in my order. Small town life is sure different than living in the Twin Cities!! :)
I decided to rearrange the desk again. Cats!! Once I gave Karma her own spot, she lost interest and the thrill was gone. So, I moved the blue leather box back to its old spot. Then decided to clean out all the paperwork in my wooden files. That took me all afternoon off and on at my table by the rainy windows. Obviously my back is slowly feeling less tight and sore!! :) I do stretches every day, too. 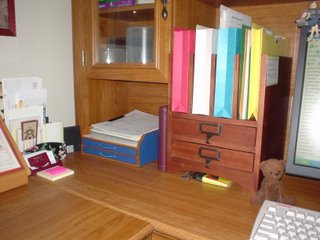 It looks better and is more organized. Now one day I need to get into my lateral files!! hehe!
Yup, it rained off and on all day today. Cooler. Nice day. The rain seems to have stopped now and as the sun is setting tonight there are pink and blue clouds across the horizon. Beautiful!
I watched Lucky Numer Slevin last night:
An identity mix-up places an innocent man in the middle of a mob war in this noir crime thriller. While checking out his missing friend Nick's apartment, Slevin (Josh Hartnett) is mistaken for Nick by thugs. Just how much trouble is Nick really in? Slevin finds out when he's forced to participate in a high-profile murder for a powerful crime boss. The top-notch cast includes Lucy Liu, Morgan Freeman, Ben Kingsley and Bruce Willis.
It was really good and had interesting puzzles that finally fell into place at the end. I had a suspicion in the beginning--was led off the track--and then found out my original hunch was correct. And yet--they threw me off with another twist I wasn't expecting! I like a movie that I can't figure out easily, but that all the pieces fit in the end. :) And, of course, look at the actors in this one!
Anyways, Leah's coming over late on Thursday to make a wedding card for Ryan and Melissa. We're going to call in our second Shaklee orders, too. After the mix up last time, I hope things will go smoother with this order. I guess August was an absolute record month for sales--ever--in 50 years for Shaklee. I haven't had all the stomach troubles I had with the other supplements and have been actually feeling a little better in that regard. :) So, I plan to add another one of their digestive products this time--which means something else has to go and I'll have to decide by Thursday.
I haven't noticed anything different from drinking a small glass of the kombucha mushroom tea every morning--yet. hehe! Does make my pantry smell a bit funny, tho. :)
Posted by Rita at 6:33 PM