Gracie gets interrupted while eating popcorn. 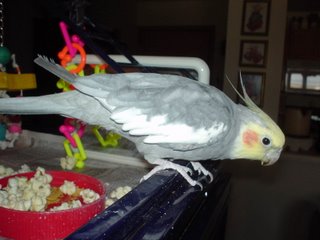 Gracie doesn't understand the bright flash and is on her way to her boyfriend for comfort. 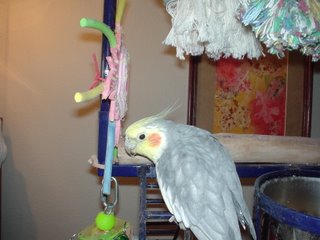 I finished this book yesterday. 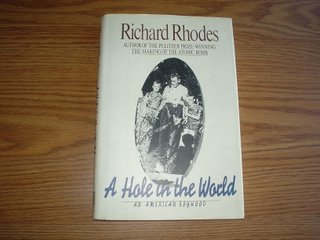 This was quite the autobiography! If you ever think you have it rough--there's always somebody who has it worse. Rhodes previously had won a Pulitzer Prize--so this is written by a man who can bring you back to his childhood with him. This was his 10th novel. I haven't read anything else by Rhodes--makes me want to search some out, even if they are not autobiographical.

Anyways, also now available at www.bookcrossing.com (under soulcomfort). If anyone is interested in my TBR books (to be read) just let me know and I'll move them to the top of my stack. I'd love to do some book trading!

The guy worked on my window and the windows directly below me until 5:30pm on Friday. Spent a long time up here. Even took off some of the pieces of the eves and nailed them back on? This whole procedure really freaked out Miss Karma. She spent all of Friday in the kitchen or the hallway watching the shadows on the blinds--and waiting for them after he left. I don't think she came into the living room with me until around midnight!

Miss Gracie, on the other hand, didn't seem the least bothered by it all. She was the one I thought would be scared of the shadows and pounding--nope! Karma--still jumpy yesterday! Me--it was a bit disconcerting--just because I'm not used to something outside my third floor window. I wonder if he finished or if he'll be back on Monday?

All the pounding stirred up old dust, I think. I have been sneezing and my nose has been running since Friday. It's a little late for hayfever season, isn't it? I have that reaction to old dusty places--garages, attics, basements, old bookstores, etc. My eyes burn, too. So, that is what I have been dealing with all weekend. Seems better today? (Knock on wood.)

Yesterday I washed clothes and watched disc two and disc three of The Decalogue (1987)--the moody series by the Polish director:

Krzysztof Kieslowski's award-winning cinematic masterpiece is a riveting, profound work of supreme daring and imagination. Using one of the Ten Commandments as a thematic springboard for each film in this collection, Kieslowski bucks the trend of action-based or psychological filmmaking, exploring the lives of ordinary people flailing through inner torments, hard decisions and shattering revelations.

I had watched the first disc quite a while ago--finally got the rest of it. Had to be in the mood, I guess (hours of subtitles--dark, gritty looking films). I honestly couldn't tell which one of the commandments he was referring to in any of them except maybe one--no lie! There were usually multiple sins--hehe! That kind of distracted me when I watched the first disc--trying to figure out which one was mainly which commandment. I gave up. Just watching them each as a story--they were interesting enough in themselves and some had interesting twists at the ends. You get to view a slice of life in modern Poland, too.

Well, got an extra hour of sleep today with Daylight Savings Time "falling back". (Thanks for reminding me, Mary Lou!)

Monday tomorrow already. Hope everyone has a good week!