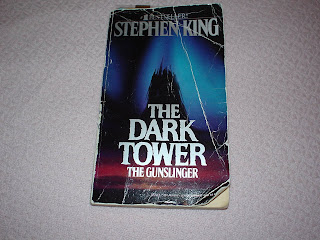 Got caught up reading Dagan's book--the first book in the Dark Tower series I borrowed from him. I am re-reading the first three or so that I had read a few years back so I will remember what the heck was going on. Things can be so strange in Stephen King books. This is a very odd series, even for Stephen. Kind of a combination western, days of knights & quests, sci-fi, time travel, and mystical as far as I recall.

When George Reeves (Ben Affleck), the actor who famously played the Man of Steel in TV's "Adventures of Superman," turns up dead, a dogged private eye (Adrien Brody) investigates and unearths a string of strange secrets. Diane Lane and Bob Hoskins also star in this gritty noir-style drama based on the true story of one of Hollywood's most infamous mysteries, a film that marks television director Allen Coulter's feature film debut.

I liked the fact that they didn't tell you what they thought actually happened, but just put out the possibilities and left you to ponder on your own--because they never did find out if it was murder or suicide. The thing I loved about the film was the time period, the atmosphere, and the interesting details of George Reeves personal life that I didn't know about. It didn't dwell on the Superman series and the movie was basically through the eyes of this detective. I loved how the detective's life was changed by his investigation of Reeves' life. There was a lot more to the movie than I had expected.

Dagan is coming over for lunch. I have some computer questions for him. He'll be here any minute----gotta go! :)
Posted by Rita at 11:47 AM