Karma disappeared last night. Found her in the dark bedroom... 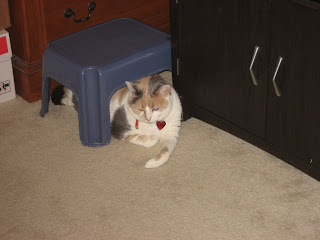 ...where she had tried to crunch herself under the plastic stool (I need to stand on to feed the fish). 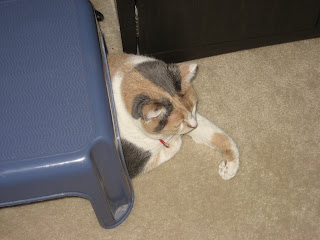 Figures. It's right next to the TV--which had been pulled out and disconnected. Wasn't in its proper place, so that made it interesting, of course.
****
Speaking of...Caroline said she'd take the TV for some new clients who were going to be arriving in September with basically nothing. So the TV and stand will have a new home!
****
And Caroline said the client that fell on Tuesday didn't break his hip, which they were afraid of, but put a hairline fracture in his leg bone. Much easier to heal. Even the doctor couldn't figure out how he had fallen to fracture the leg bone so high up and not break his hip. Anyways, it was a better outcome than expected. :)
****
Sadly, I am going to have to go close up and put the AC on already today. It's a hot one up here on third floor.
****
Made another bookmark sheet last night. 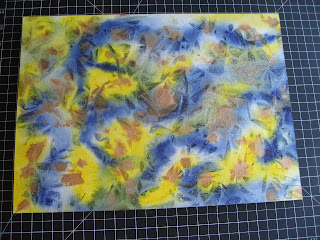 Used some Daniel Smith watercolors. They are really vibrant! I may have to play with those some more! But I'm having the same troubles with the Dr. Martin's calligraphy gold as I did with the other Dr. Martin's liquid watercolors--they don't move. Oh well, I'll use up the rest of this bottle. They were all old to begin with, I suppose--on sale at Hobby Lobby. I guess I am just not a fan of liquid watercolors. I should get out some of my colored inks again....hummm? ;)
****
The quote today...well, I kept thinking about this video I watched on wimp.com yesterday.
****
http://wimp.com/homeroomteacher/
****
The teacher talked about empathy.
****
"Let people live in your heart."
****
How if you truly listen to another person they will live in your heart forever.
****
Have a great day!! :):)
Posted by Rita at 1:32 PM

I think living in an actual heart might be a lot like Karma being squinched (if this isn't a word, it ought to be) in under that stepstool.

That bookmark sheet is wow! eyepopping! (And I'm biased, yellow and blue are my favorite colors) Kind of a Vincent Van Gogh's Sun Flowers painting mashed into his Starry Night...

I love the bookmark sheet such pretty colors. So glad that the client didnt break his hip and so glad that your tv will be going to a good cause and help someone out, hope you are having a good weekend :o)

PS: I wanted to mention to you a book that you might like, hubby pointed it out to me today but I didnt buy it yet but I am sometime because it sounds really good and it just reminds me of the kinda of writing that Pillars of the Earth and World Without End is. The book is titled Roma and the author is Steven Saylor :o)

Glad it wasn't as bad as expected for the other client, and that the TV and stand will be going to a new home soon. :)

Well, of course... Anything in a new location must be investigated thoroughly by any cat or dog who might be in the vacinity. I mean, what if it's just a replica of the same item? Or, maybe it escaped when they weren't looking? in which case it could have come back with all kinds of interesting smells all over it!

The pictures of Karma were cute. I was wondering how she managed to get herself in there like that. LOL

I'm glad the client who fell will be okay, and I'm glad Caroline knows someone who will put your tv and stand to good use. I'm sure it will warm their heart knowing someone cared enough to give it to them.

The video was very thought provoking. I certainly wasn't expecting what unfolded in his classroom. I commend that teacher for what he is to his children. He understands them, sits with them, and listens to them. The children learned a lot from the letter Ren wrote and read in front of the class. It opened up a whole new conversation that carried from one child to another. Wonderful story. Thank you for posting the link.

"Let people live in your heart."

Wow... just watched the video in your link, what a great teacher and to teach not to be afraid of your feelings. Thanks for sharing that. Your bookmark paper is wonderful... have a wonderful day!

Iggy--LOL! But isn't it amazing how many can fit in there without spilling out? Unlike Karma who spills out from under the plastic stool--hehe! Glad you liked the blue and yellow sheet. That is what you think of with some of Van Gogh's work. ;)

Lynn--Ah--Roman times! You'll have to tell me if you read it whether you liked it or not.
I love freecycle, but I figured if Caroline could find somebody...they can't even use freecycle. Don't have the ability or no internet access. :):)

Tori--Yes--it was nice to hear all that good news from Caroline. :) Animals seem to have endless curiosity for everything around them. We have that when we are little, but seem to have a tendency to lose it. Karma reminds me--just like Dagan did when he was little--hehe!
Sorry! I just realized that the link I posted had a lot of subtitles! :(

AliceKay--I kind of wondered how she even got under there, too!
I was touched by the video. Glad you liked it, too! :)

GiddyUp--welcome!! So glad you enjoyed the video. I started to follow wimp.com on facebook and they have such a wide variety of short videos that they must just find all over the internet. I like a lot of them. Thanks! Hope you had a wonderful day, too!

Hey Rita! Cheers to you getting the bookmark sheet all made up. It's lovely!!

Karma is a cat...loving to get into tight places and pull disappearing acts. They do it to make sure we still care even if they are cats and try to make us think that they don't care if we look or not. We "know" that they do. :) happy week to you!

Hey Stephanie! I've been working on some more bookmark sheets, too. Having fun!

Yes! I know just what you mean. They go hide and seem to take delight when we finally go looking for them--and then feign disinterest--but you can see that little sparkle in their eyes like they were just testing and you passed the adoration test--ROFL!

Don't worry about the thing with the link. If things are too visual for me, I just ignore them. It's your blog, post what you want to post. :)

Okay, Tori. I was just thinking about if you listened to it--there would have been a lot missing because of the subtitles inbetween the narration. :):)