Dagan and Leah stopped by briefly on Tuesday to string cable around the living room. :) 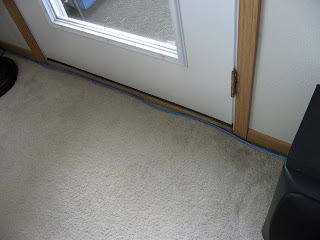 I put all the boxes and paperwork under the art table for now. The place doesn't look quite as chaotic now. ;) Looks like Friday is likely the day Dagan and Leah will come back with their router (which works, of course) to see if it is the router that is acting up over here. Maybe the tuner, too? I can't remember if they are bringing both of them. I hope it isn't something like the computer or the new TV that is the problem.
****
It has been doing the strangest things. Shutting off the DVD player for lack of a signal? When I was taping one program any other channel I went to it automatically starting recording that one, too? (I might have been doing something wrong, of course.) Still consistently losing the signals or losing the Internet altogether. So--we are trying to find out what the problem is by process of elimination. *sigh* I think Dagan and Leah probably regret starting this whole process.
****
But--when it is working--I really love it! I get a few less broadcast channels than I had on the basic lifeline cable, but I like what I get better. I never watched the two Cspan or the two shopping network channels that I had. I get the usual: CBS, ABC, and NBC--an extra local WDAY channel (they run ABC up here) with different programs and a WDAY weather channel (now I don't have to watch the news anymore--tada!)--4 PBS channels!! (one is a duplicate, tho, in HD)--"THIS" channel that plays old movies and old programs like Sea Hunt--and then FOX. And I love being able to watch Netflix instant movies and having the Internet on the TV. So--when we finally find out what the problem is, it will all be so cool. :)
****
Let's see...CashWise came on Tuesday. And yesterday I had my annual checkup with my rheumatologist at the clinic. 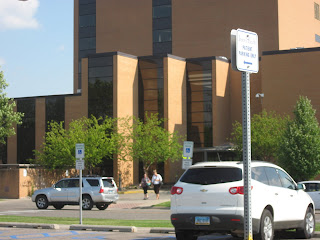 It was actually a really decent day, as you can see. These are shots from the parking lot before I left the clinic. Blue sky, white clouds, lower humidity, windy--pretty decent out. 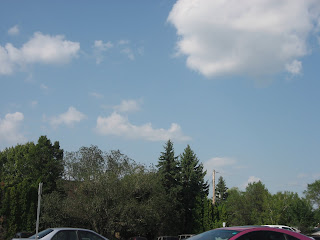 And here's a shot of home-sweet-home thru my car window on my return. :) 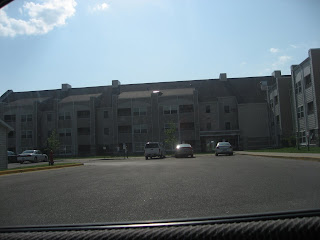 Dr. Sleckman did seem proud of me for going off the pills: Darvocet, Bentyl, and Ranitadine. Now I just take them if I really need them. He understood why I didn't want to be addicted to pain pills and foggy-brained. Brain fog is a problem with fibro in the first place--hehe! It's up to me whether I want to take the pain pills regularly or not. We'll see how it goes.
****
I brought him a copy of Baby Girl and told him about winning the contest. He wrote a play--in French--that sounds like it will be put on in March 2011! He'd taken a writing workshop, but said he just doesn't have the time to devote to writing--very time consuming. Yes. I told him that maybe by the time I come back next year I will finally have something newly written to show him. Maybe. If I can ever figure out how to manage the time involved to do so--hehe!
****
Anyways, by the time I got home I was so exhausted. Whenever I leave the house I remember quickly what bad shape I am in--hehe! I was in bed early, but woke up in 3 1/2 hours and couldn't get back to sleep. Hurt all over. Beautiful night, tho. First time have been able to have the windows open in ages. So I read and watched a couple of DVDs. Been up since 1:30am and am about ready to go back to bed for a nap--or a sleep--whatever happens.
****
Miss Karma relaxing on her back... 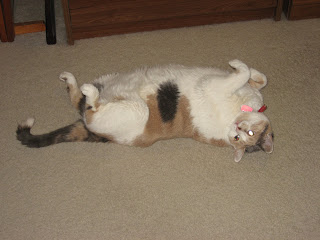 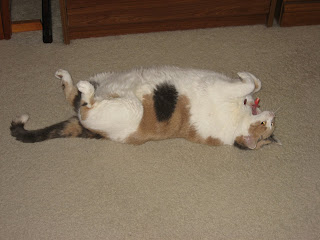 What a rough life, eh? ROFL!
****
Speaking of yawning....;)
****
"Sit in reverie, and watch the changing color of the waves that break upon the idle seashore of the mind."
Henry Wadsworth Longfellow
Posted by Rita at 9:45 AM