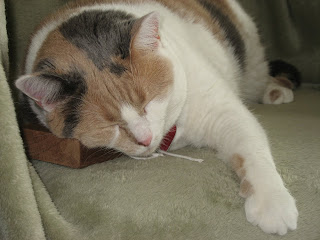 And another windows-wide-open day today!! Low 70s during the day and 50s at night--ahhh! Best sleeping weather. :)
****
Caroline called and had to reschedule, tho. There was a client who fell and was being taken to the hospital by ambulance and she had to go because her boss wasn't available. She'll come on Thursday instead. Said she had more books for me. I asked her if she wanted the TV and stand from the bedroom. Caroline asked if she could check and see if any of the clients would be able to use it. Sure!! They're mostly disabled, seniors, etc. That would be nice if someone could use it. She said most of them aren't even able to use freecycle. She'll let me know on Thursday. If she doesn't find anyone, then I'll put it up on freecycle.
****
Dagan emailed me to tell me Leah wasn't coming (had to work late and was hitting the gym). He came over and we had spaghetti (have lots of leftovers so don't have to cook for days--nice!). He unhooked the TV and VCR in the bedroom for me. The DVD player was being nice and working just fine--hehe! So let's hope it was just a fluke of some kind because it has been working now.
****
We started watching the new Clash of The Titans. Not very good. Dagan left. I half-watched the rest and worked on letters. But then I watched Repo Men and that sure got my attention! This movie is, also, violent and gory, but it didn't upset me like Unthinkable did. Can't put my finger on what it was that bothered me so much--maybe because there was nothing redeemable? Repo Men did have something to say and think about--even tho it was very dark, too.
****
http://www.imdb.com/title/tt1053424/
****
In the world of this sci-fi thriller set in the not-too-distant future, artificial organs are readily available to anybody with a credit card. But what happens if a buyer falls delinquent on his payments? Jude Law stars as an organ repo man who's now fleeing his ex-partner after failing to keep up the payments on his own recently installed ticker. Miguel Sapochnik directs; Forest Whitaker and Liev Schreiber co-star.
****
Why I preferred one and not the other? I guess I have a mysterious mind like Miss Karma--ROFL!
****
Well, I am heading for the porch. Started World Without End yesterday--the sequel to Pillars. Time has jumped 150 years, so I am still struggling to get my bearings here in the very beginning. I want to enjoy the porch while I can. They've started on the roof of the other building first. It was shingles! ;)
****
Hope you're having a perfect day, too!! :):)
****
"Laughter is carbonated holiness."
Anne Lamott
Posted by Rita at 11:29 AM

It's a cooler and overcast day here today. Little sprits of rain now and then. It's feeling more and more like fall around here. I'm glad you have that porch to enjoy while the weather cooperates. A customer asked me at work this morning if I realized Christmas was "only 4 months away". I think I had a disgusted look on my face when I looked up at her to reply, "no I hadn't". LOL

I hope Caroline's client will be okay. Falling is the pits. (i'm still healing from mine) I also hope she can find a client who could use your TV and stand.

I remember watching Repro Man and thinking, "Oh.. this is just... odd... and creepy."

I love that shot of Karma!!!

I hope all your readers will go to:

and vote for her!!

I hope Caroline's client is OK.

That would be nice if one of her other clients can use the TV.

Lynn--I'm just starting part three and it's getting harder to put it down. I was reading it before I went to bed, but have been finding myself still reading at 3am--hehe! It is too heavy to hold--ROFL! ;)

AliceKay--Ha! I've been thinking about Christmas--only because I have Christmas cards to make and don't want to be scrambling to finish again--hehe! Was just playing around yesterday (Friday). Have to figure out something fairly simple that I have the supplies for and can make over a hundred of. ;)
Shingles! We all guessed it right--hehe!

Iggy--Yup! Repo Men is odd and creepy. In the future when your artificial heart or liver could be repossessed if you didn't make the payments!!
Thanks for the idea and the Karma promo! ;)

Tori--turned out good on both counts! :)

I voted for Karma, Iggy!

Serena--Thanks for voting for Miss Karma. ;)

That's a great description--ghastly but intriguing. :)